Jan Bartek - AncientPages.com - The Georgia Guidestones have been vandalized on previous occasions.

The recent destruction of the monument dubbed "America's Stonehenge" near Elberton took place on Wednesday this week. The Elbert County Emergency Management Agency has informed the Georgia Guidestones were damaged by an explosive device and the explosion was seen on video cameras shortly after 4 a.m. Pictures and aerial video show the destroyed panel on the ground. 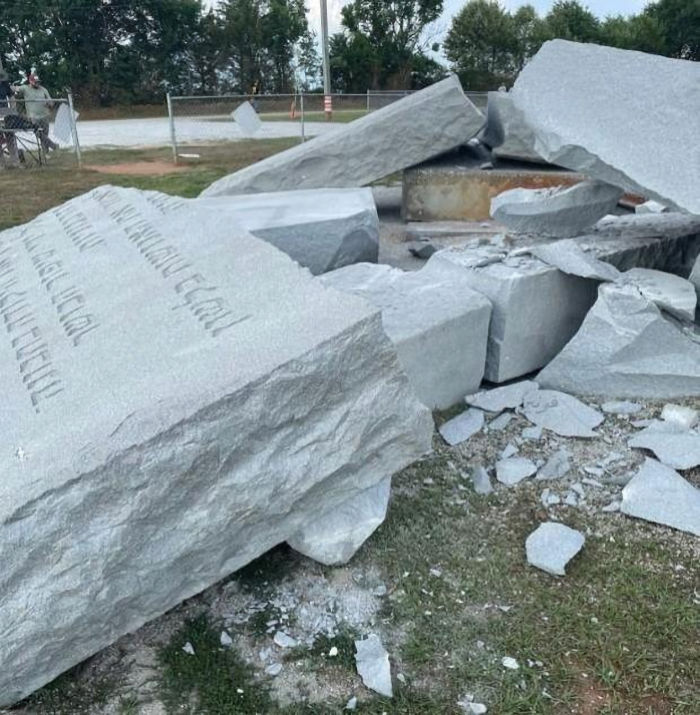 As previously explained on AncientPages.com, this peculiar structure is it is undoubtedly one of the most enigmatic monuments in the US. The ominous monolith with stone tablets inscribed with directions for rebuilding civilization after the apocalypse.

There is one language on each face of the four large upright stones. Moving clockwise around the structure from due north, these languages are: English, Spanish, Swahili, Sanskrit, Hebrew, Arabic, Chinese, and Russian.

For more than three decades the structure has been protected by many supporters and also vandalized by strong opponents attacking the monument as the Ten Commandments of the Antichrist. 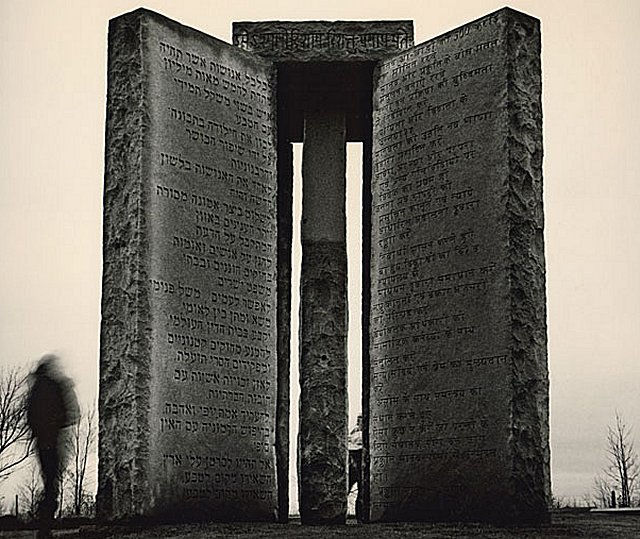 However, the most widely agreed-upon interpretation of the stones is that they describe the basic concepts required to rebuild a devastated civilization.

The enigmatic roadside attraction was built in 1980 from local granite, commissioned by an unknown person or group under the pseudonym R.C. Christian.

Many groups have been annoyed with the Georgia Guidestones and several attempts to damage the monument have taken place before.

Elbert Granite Association Executive Vice President Chris Kubas and many other people interpret the stones as some sort of guide to rebuilding society after an apocalypse.

"It's up to your own interpretation as to how you want to view them," Kubas said.

Kubas said the association has helped remove previous vandalism and will likely seek to stabilize the damage. He said local officials and community leaders may have to decide who, if anyone, pays for restoration.

"If you didn't like it, you didn't have to come see it and read it," Kubas said. "But unfortunately, somebody decided they didn't want anyone to read it."

(1/3) The GBI is releasing surveillance video from this morning’s explosion that destroyed the Georgia Guidestones. pic.twitter.com/Vo3RyjDxdN

“The GBI on Wednesday evening released surveillance video showing the violent explosion and a silver sedan speeding away from the scene. Investigators are asking the public for help identifying the perpetrators. No suspect descriptions, or a possible motive, have been released. It's unclear how many suspects may have been involved,”  CBS News reports.

Elbert County sheriff's deputies, Elberton police and the Georgia Bureau of Investigation are among agencies trying to figure out what happened. Bomb squad technicians were called out to look for evidence, and a state highway that runs near the site was closed for a time.