Conny Waters - AncientPages.com - In Japan, the suppression of Christianity increased from the end of the 16th century to the beginning of the 17th century, and many missionaries and Japanese believers were martyred during this period.

New research has uncovered a letter indicating that Hosokawa Tadaoki, lord of the Kokura domain from 1600 to 1620, ordered the execution of Diego Hayato Kagayama, a chief vassal of the Hosokawa family, and the banishment of Genya Ogasawara, both Christians. 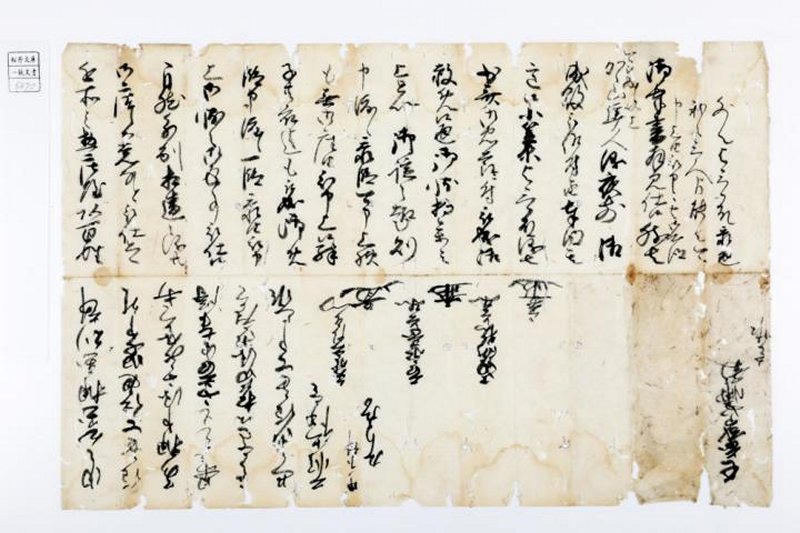 During this period, letters were written on a half-sheet of paper folded horizontally and written from right to left. When the writer reached the left edge, they continued writing on the reverse side which is why the bottom half of the letter is upside down. The signatures of the three senders are in the middle of the lower half (the end) of the letter. Image credit: Kumamoto University Library

The punishment and martyrdom of both men were previously known only from reports by Jesuit missionaries to Rome. The discovery of primary historical documents created within the Hosokawa family has clarified both the authenticity and the limitations of missionaries' writings of the time.

In the mid-16th century, the number of Christian believers in Japan exploded with the arrival of the Jesuit missionary Francis Xavier. Eventually, some of the feudal lords, daimyos, and their vassals came to believe in Christianity.

It is well known that Tama (Gracia/Garasha) Hosokawa, the wife of Tadaoki Hosokawa, the second head of the family, was a Christian. She maintained her faith and met her end in a major civil war, Battle of Sekigahara, in 1600.

When the Edo shogunate issued a nationwide ban on Christianity in December 1614, Hosokawa family retainers abandoned their faith one after another. However, some vassals in the family chose not to apostatize, most notably Hayato Kagayama and Genya Ogasawara.

Hayato Kagayama was a military commander who served three feudal lords who were all closely associated with Christianity.

The first two were Christian, and after losing them to banishment deportation and death from illness, he proved himself to be a highly valuable retainer to the Hosokawa family. Although Tadaoki Hosokawa himself was not Christian, his wife Gracia was a devoted Catholic.

Genya Ogasawara was Hayato's son-in-law and the son of a man famous for having been with Gracia during the last moments of her life. As the Hosokawa family residence was besieged by the enemy during the Battle of Sekigahara, Genya's father took Gracia's life and then committed seppuku, a form of ritual suicide in the samurai code of honor. Both of these acts were by order of Lord Hosokawa, who then became deeply grateful to Genya's father for protecting his wife's honor and not giving her to the enemy. Both Genya and Hayato refused to obey the order to change their religion, but it is thought that Tadaoki respected the two so much that he was unable to take decisive action to punish them.

According to Jesuit missionary reports to Rome, on September 8th, 1619, Tadaoki finally ordered the beheading of Kagayama Hayato because he refused to apostatize. He also banished Genya Ogasawara and his family from Kokura, where the Hosokawa family castle was located, to the countryside to live with unknown farmers and outlaws.

Researchers from Kumamoto University's Eisei Bunko Research Center* discovered a letter related to these orders while analyzing an archive of the Hosokawa family's first retainer, the "Matsui Family Documents."

The sender, Rokuzaemon Yano, and three others were officials in charge of Genya Ogasawara's custody, and the recipient, Okinaga Matsui, was the first retainer of the Hosokawa family and the chief administrator in the Kokura domain.

The translation of the letter is as follows:

We have received Lord Tadaoki's decrees.

We understand that the order to execute Hayato Kagayama was given last night (September 8).

We immediately informed Genya Ogasawara that our Lord decided to save his life in gratitude for Genya's father's fealty. In response, Genya said, "I am so grateful to my Lord that I am at a loss for words." When we informed him of the Lord's intention to spare the lives of his family, including his children, he expressed his heartfelt gratitude and wrote a letter of reply to our Lord. In addition, Genya said to us, "Please, the three of you, express very carefully my gratitude to Lord Tadaoki." Please keep this in mind.

We ordered local village officials to keep a close watch on Genya, and to seize him and inform us immediately if he tries to escape from the confinement area. If it is difficult to seize him, we understand it is not a problem to execute him. If any abnormalities occur we shall report them as soon as they occur.

5:00 PM on the 9th of September,
From: Rokuzaemon Yano, Jinbei Yoshida and Ihei Tomishima,
To: First Retainer Okinaga Matsui

Professor Tsuguyo Inaba said following about this historical document: "Until now, we could only learn about the martyrdom of Hayato Kagayama and the punishment of Genya Ogasawara from the reports of Jesuit missionaries from Rome, and we could not eliminate information uncertainty. However, with the discovery of primary historical documents created by the organization that handed down the punishment, the Hosokawa family, more facts are now known. The punishment of the two men is now thought to have been carried out in the immediate aftermath of the "Great Martyrdom of Genna in Kyoto" (1619), one of the greatest incidents in the history of Japanese suppression of Christianity, by Tadaoki, who felt threatened by it. This was a shocking and decisive suppression of Christian retainers and vassals among leading feudal lords. After that point, daimyo and samurai within the family were forbidden from being Christian. This primary historical document demonstrates removal of Christians from the ruling class structure, and is a great historical discovery for Japanese Christianity."

Items 1 and 3 of this letter are almost identical to the reports sent to Rome, but item 2 has never been seen before in any historical document. Genya Ogasawara's father protected the honor of his lord's wife, Gracia, by not letting her be taken hostage during the Battle of Sekigahara. After her death, he died a martyr close by. This document clearly shows that Lord Hosokawa highly valued Genya's father's loyalty. However, the Genya Ogasawara and his family were ostracized by Hosokawa because they would not renounce their faith.

Eventually they would all be executed in Kumamoto in December 1635.

The report from Jesuit missionaries at the time of Genya Ogasawara's punishment reads as follows:

  He was banished to the countryside where there were unknown farmers and outlaws in the territory.

  They were mixed in with the lower class of artisans and poor peasants and treated as if they were the lowest class of slaves or discriminated people.

However, the letter found in the Matsui Family Documents reveals that the Genya family was managed by three officials (the senders of the letter) and village officials of the region where they were confined, in other words, within the formal domain administration structure of the Hosokawa family. It is also a valuable primary historical document that concretely shows reports to Rome by Jesuit missionaries in Japan during the period of suppression can contain both facts and exaggerations.