Ellen Lloyd - AncientPages.com - Few have heard his name, but to the people living in a small village in Kyrgyzstan he was an extraordinary man and hero.

Kaba Uluu Kojomkul, whose name means Koschomkul son of Kaba was a real giant who was incredibly strong. Born in 1888 in the Koschomkul in the Suusamyr Valley he made an everlasting impression on those he met and the memory of him is still kept alive among the locals. That’s why the village where he was born is named after him. 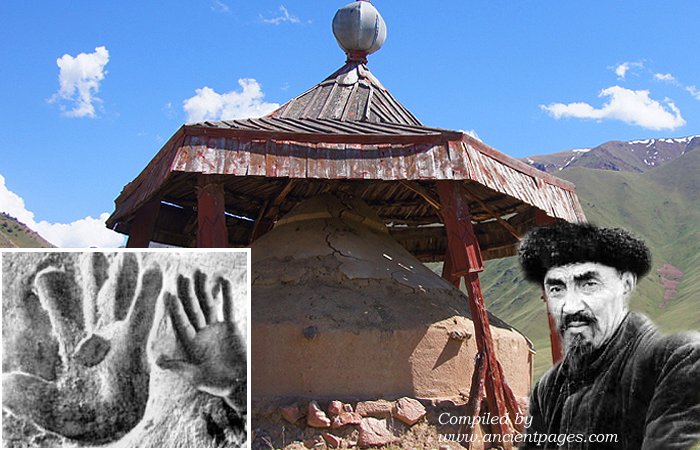 Today, we might be impressed by his heigh but to the locals who admired him so much that they built an unusual monument in his honor, he was much more than just a very tall and strong man. Kaba Uluu Kojomkul was a unique individual who had a good heart and that’s the reason why he was nicknamed the gentle giant. He loved animals, people in general and he was especially fond of children.

The 2.30 m (7,54 foot) tall and more than 250 kg (551 pounds) heavy giant Kaba Uluu Kojomkul was a remarkable athlete who became a sensation when people saw him perform. He won all wrestling and strength competitions along the Silk Road, and he remained undefeated until the end of his life. He was so incredible that it took him only 23 minutes to defeat the previously undefeated Baluan Scholak from Kazakhstan after he had challenged him. 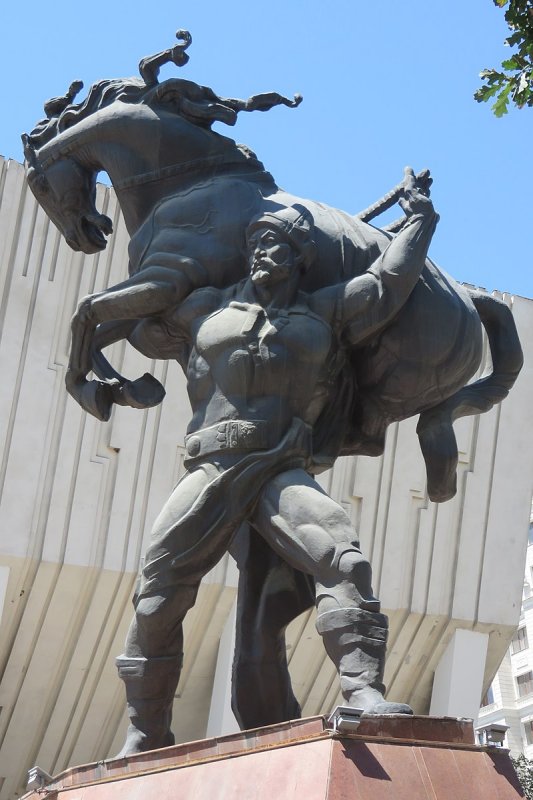 When locals recall his strength, they often mention a story of how he carried a heavy boulder. According to the legend one day his riding horse got stuck in high mud in continuous rain. Not being able to ride anymore, he took the horse on his shoulder and carried it 100 m until it was able to walk again.

Another local story tells Kaba Uluu Kojomkul placed a 160 kg boulder that he had carried several kilometers from the riverbed on his mother's grave. His strength was remarkable, but his good deeds were equally impressive. He never hesitated to donate sheep and horses won in competitions to villagers in need, which of course made him a loved and respected man among his people.

The giant Kaba Uluu Kojomkul would not let anything bad happened to another person, even if he meant he had to be punished himself. During the Great Purge in Russia when many prominent Old Bolsheviks were found guilty of treason and executed or imprisoned, the giant of Kyrgyzstan suddenly found himself in trouble.

At the time, in 1937 he was the chairman of a kolkhoz farm (a form of collective farm in the Soviet Union). When Kaba Uluu Kojomkul was approached by the NKVD, the Interior Ministry of the USSR, and asked to give false testimony against the chairman of the kolkhoz in the neighboring village, the giant refused. This led to that he was sentenced to one year in prison, which he received in a remote prison camp, but fortunately, he survived this, and could later return back to his people. Now he was even more popular than before. 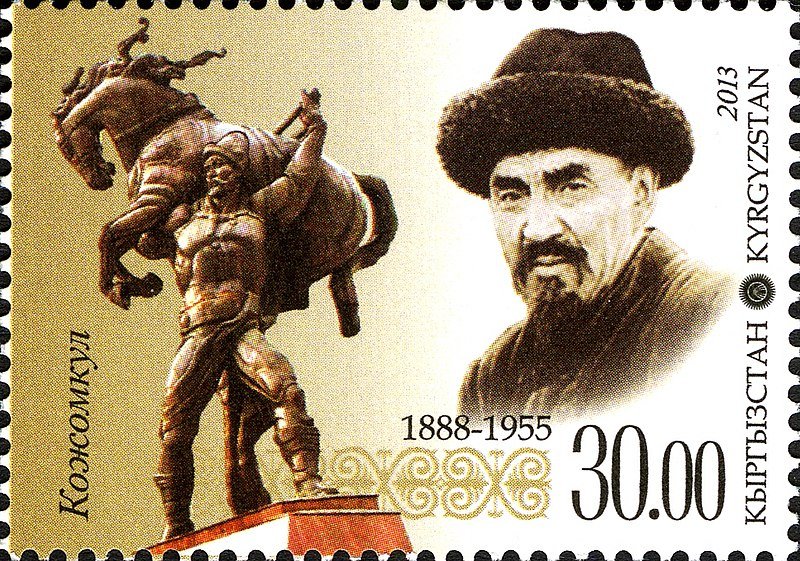 Kaba Uluu Kojomkul died in 1955 and he is still a folk hero. A small museum in townhouses a collection of Kojomkul’s belongings and some pictures of him lifting heavy weights. Various postage stamps depicting him carrying his horse have been made and some years ago the Kyrgyz Ministry of Culture, Information and Tourism announced that a film about the life of the folk hero would be produced. 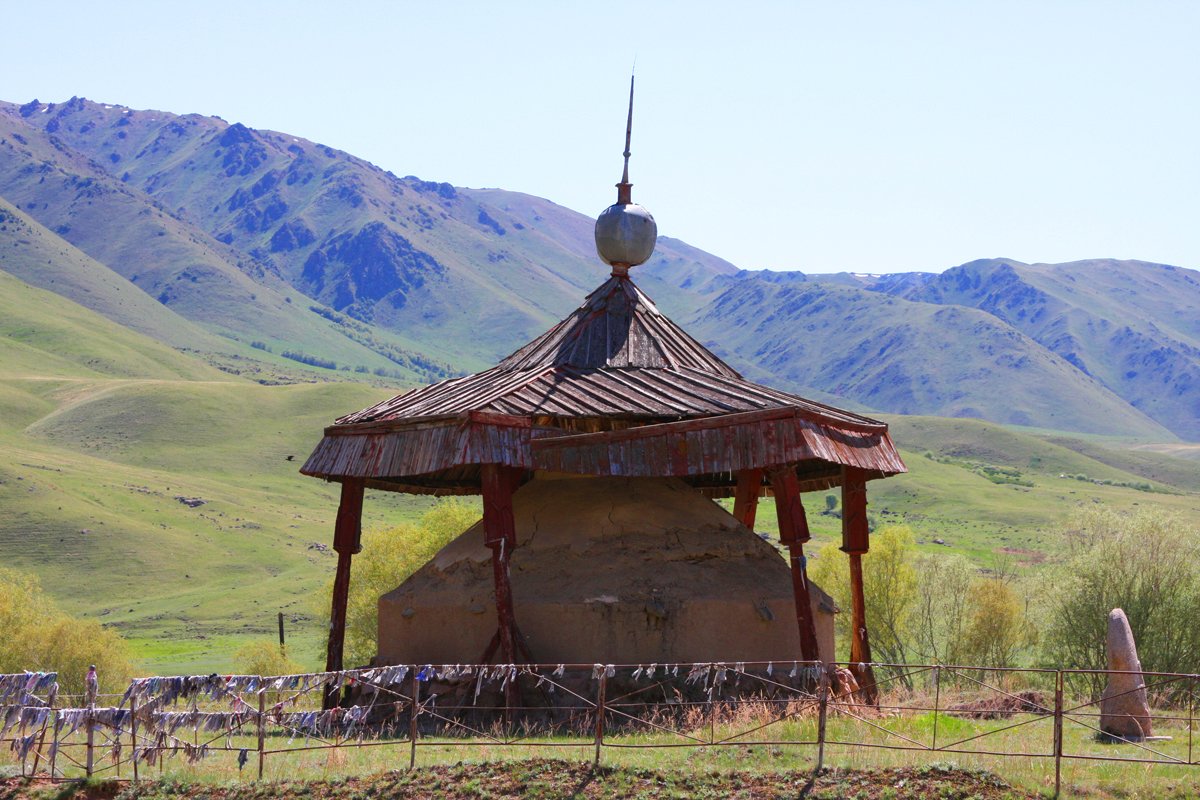 A memorial monument built for the giant Kojomkul.  Credit: Trip to Kyrgyzstan

Giant Kaba Uluu Kojomkul was never as famous as the world’s tallest man, Robert Pershing Wadlow, but he was an extraordinary man who history should not forget about, and people in the village of Koschomkul made all they could to let the world know about the gentle giant who lived among them.