A. Sutherland  - AncientPages.com  - Atlantean statues Of Tula are four anthropomorphic characters representing ancient warriors who followed a Mesoamerican god-king Quetzalcoatl, a feathered serpent.  Quetzalcoatl represented Venus aspect - the Morning Star and was also one of the four gods who held up the sky. 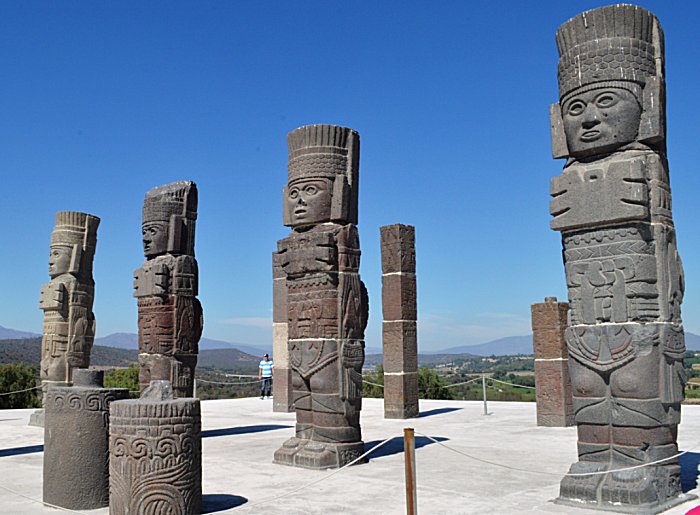 Atlantes of Pyramid B at Tula Image source:

The figures are among the best-known prehispanic sculptures in Mesoamerica. They can be found in the Tula archaeological region in Mexico's central highlands in the present-day Mexican state of Hidalgo, Mexico.

Tula (or Tollan) was an ancient capital of the Toltec civilization, which ruled Mexico 1000 years ago, and flourished from about 850 to 1150 AD.

These stone giants are located in the upper part of the temple pyramid, probably dedicated to god Quetzalcoatl's cult. According to a myth, he died on Earth and then ascended to the sky to become the Morning Star.

Discovered and excavated by archaeologist Jorge Ruffier Acosta between (1956–1957), the 'Tula Giants' served many centuries as columns supporting the building's roof. They still hold a mystery: how the figures were carved and transported to the pyramid's top.

The most common theory is that ancient sculptors who created the statues used stone tools, such as stone hammers to break the stones, small chisels for fine sculpting, and scrapers of various sizes to shape and enhance their time-consuming work with little additional details.

No doubt, the figures must have been significant to the civilization that created them. The Toltecs were masters of Cyclopean masonry, and their astonishing temples, palaces, and roads were constructed with precision. Their accomplishments were even admired and praised by the Aztecs.

As to the word 'Atlantean' associated with the statues, this name was given to them because of their similarity to the load-bearing figures like Atlas, a Titan god of endurance in Greek mythology. Atlas was responsible for maintaining the weight of the world.

Similar figures were found in the Yucatan, in the Temple of the Warriors, at the Maya-Toltec city of Chichen Itza, Mexico.

Who Made The Atlantean Statues? Was It Lost Highly Advanced Civilization Or An Alien Race?

Since the 1970s, some theories have been proposed to explain the existence of the enigmatic statues.

According to the biblical account of Genesis, it was theorized the figures had a connection to the legendary Atlantis, the highly advanced civilization of giants that once existed on Earth before the Great Flood.

Those who support the extraterrestrial theory point out that Tula's masterwork represents the aliens who created the statues in the image of themselves. Therefore, the butterfly-shaped breastplates are devices helping to breathe in the atmosphere, and that the weapon they are carrying is a laser beam.

The enigmatic gigantic basalt figures are more than 15 feet (4.5 m) tall. Their weight is between 8 and 8.5 tones and a diameter of one meter.

Their additional decorations are headdresses of snakeskin and feathers, stylized butterfly breastplates, and carry spear throwers and supply of spears. On the back, they have a shield with the seal of the sun.

The Atlantean figures clearly show advanced use of sculptural techniques, based on the fact that there is continuity between the carving of one piece and the other to hide the fact that they were made separately. 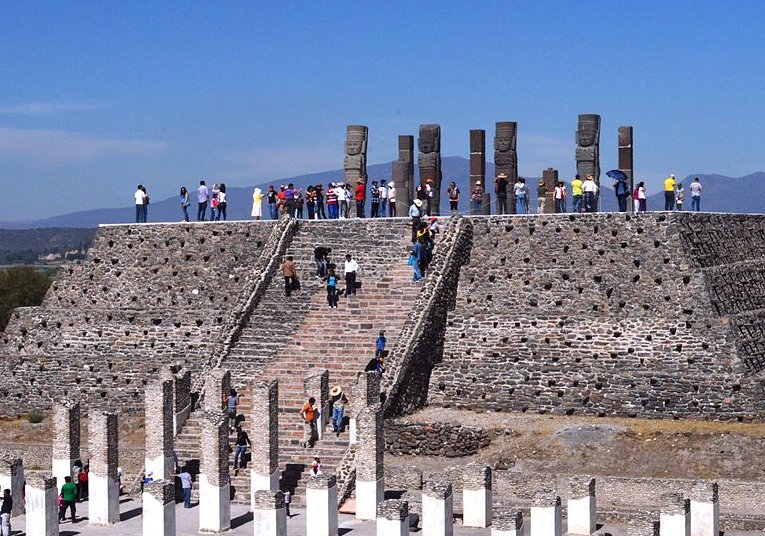 As we mentioned earlier, Tula had its apogee in 1000 AD and then declined in the 12th century. Based on certain signs, the city was destroyed by a great fire.

Little is known about the mysterious city of Tula and its relations with Teotihuacan.

Ancient sources confirm it rose to prominence between Teotihuacan's fall, the largest city in the pre-Columbian Americas, and the rise of Tenochtitlan, located in what is now - Mexico City. Also, the Toltecs' history is lost in the mists of time, and the information we possess about this ancient civilization is often filled with contradictions. Although Tula never reached Teotihuacan's size (it fell around 1150), it significantly influenced the following Aztec Empire.

No written records exist, and the archeological evidence is scant regarding Tula.

Also, very little has been published on Tula's relations with the great city of Teotihuacan. It is believed that the Toltecs built Tula as a mini-version of Teotihuacan. Perhaps the massive stone sculptures of warriors, the "Atlantes" know much more about Tula's best time and its decline.

Unfortunately, the figures are silent witnesses to what happened in the city.

In 1944, one of the four Atlanteans was removed from the temple and taken to the Anthropology National Museum. It is currently on display in the Toltec Hall of this museum.

A replica was created to fill the statue's empty space.  While looking from the front, the substitution is the first from the left.

Ryan, Duncan, The Aztec: The Last Great Civilization of Mesoamerica