Conny Waters - AncientPages.com - An ancient gold earring was found during excavations at the site of the Ancient Roman colony Deultum near the town of Debelt, Burgas District, near Bulgaria’s Black Sea coast.

The artifact that seems to be the same as the earrings worn by the woman depicted in this Fayum mummy portrait from Roman Egypt, was found in one of the rooms in the ruins of the thermae (public baths) of Deultum), according to Krasimira Kostova, of the Debelt Archaeological Preserve. 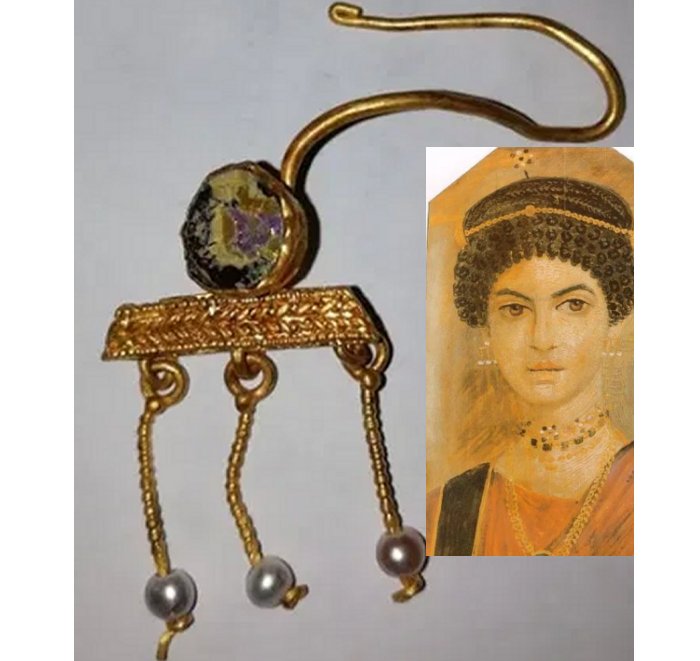 The gold earring found in the Roman city of Deultum – Debelt in Southeast Bulgaria appears to be the same as the earrings worn by the woman depicted in this Fayum mummy portrait. Image credit: Deultum – Debelt Archaeological Preserve.

Fayum mummy portraits are portraits on wooden boards that were attached to the mummies of upper-class residents buried in Egypt during the century BC – 3rd AD of the Roman Era. They were unearthed in many places in Egypt but particularly in the Fayum Basin, in Hawara, and the Roman city of Antinoopolis from the time of Emperor Hadrian (r. 117 – 138).

As to the ancient site of the ancient Roman city of Deultum (Colonia Flavia Pacis Deultensium), "it was built in the 1st century AD near a previously existing ancient Thracian settlement called Debelt or Develt. It was settled by Roman military veterans from the Augustus’ Eight Legion (Legio VIII Augusta) near the Mandra Lake (today the Mandra Water Reservoir) where it also had a port connecting it to the Black Sea," writes Archaeology in Bulgaria.

She points out that the thermae of Deultum were destroyed in 357 – 358 AD during a major earthquake.

The newly discovered Roman gold earring from Deultum (left) is similar or the same as women’s earrings depicted in the Fayum mummy portraits from Roman Egypt (right, and also see below). Photos: Deultum – Debelt Archaeological Preserve

“The gold earring probably was lost as it fell between the tiles, and when the thermae were destroyed by the earthquake, it remained there. Subsequently, the site was leveled with embankments, which is how it remained there. Because the spot of the thermae remained inhabited after that," Krasimira Kostova of the Debelt Archaeological Preserve said.

“This jewel is extremely sophisticated, it is very interesting. We found it has parallels to one of the Fayum mummy portraits, which has led us to date it to the 2nd century AD."

Kostova  added that “ the discovery of the gold earring like the earrings depicted in that Fayum mummy portrait is evidence that the female inhabitants of the Roman colony of Deultum were following the fashion trends in the Roman Empire, and were up to date with fashion."

The excavations of the Roman city of Deultum have also yielded a large number of bronze coins, and now the archaeologists are focused on exposing more from the ruins of the thermae (public baths) of the Roman colony.

The later homes, which were built on top of the ruins of the Roman thermae in Deulum, were researched during last year’s archaeological season, with the current excavations now targeting the layers beneath.