The tomb consisted of a burial chamber measuring about nine feet long, six feet wide, and three feet deep, and was connected to a nine-foot-long vertical shaft. 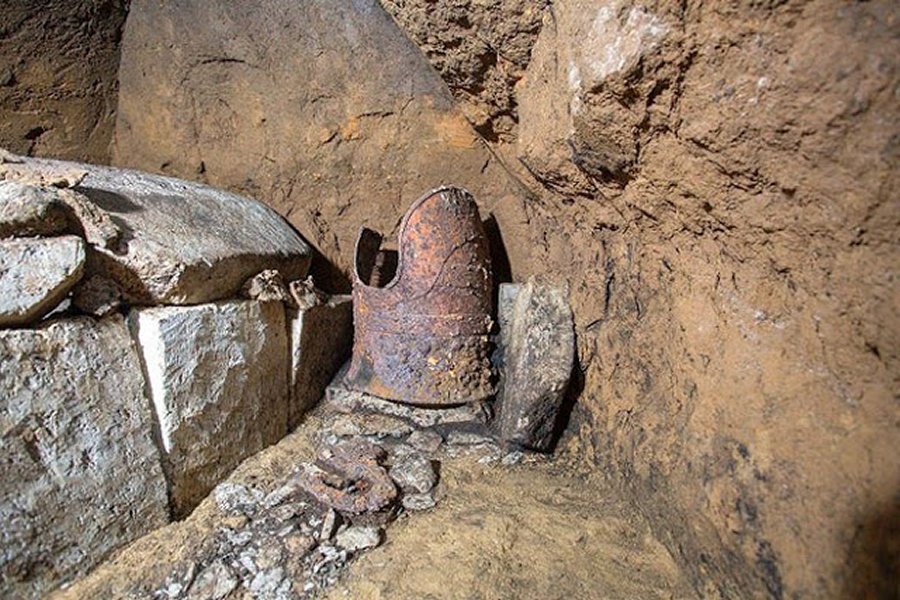 A cuirass known as a “tanko” and preserved in excellent condition, and a stone coffin, left, have been unearthed in Shibushi, Kagoshima Prefecture. (Provided by the Shibushi city education board)

The tomb (found in december 2017) is dated back to the Kofun Period and it is believed to have belonged to a local chieftain who received the breastplate, known as a tanko, as a gift from the Yamato imperial court. The armor, measuring 35 cm by 40 cm and in almost perfect condition, was found standing beside the coffin.

“It was likely built for a powerful leader in the local region who was directly connected with the Yamato imperial court,” said Tatsuya Hashimoto, a professor of archaeology at the Kagoshima University Museum.

Researchers say that this type of construction is unique to the southern Kyushu region. The site has been named the No. 3 Harada Chikashiki Yokoanabo (Harada underground tunnel-tomb).

The skeletal remains are those of a 170-centimeter-tall adult male. A sword, its scabbard and other items were also found in the pumice stone coffin measuring 2.4 meters. It is 60 cm wide and 50 cm tall.

NOTE: Around the middle of the 3rd century A.D., when Himiko, a female ruler of the early Japanese political federation known as Yamatai, is said to have died, monumental keyhole-shaped tumuli (zenpō-kōen-fun) began to be built across the Japanese archipelago, thus opening an era in Japan’s history now known as the Kofun period.

The Kofun Period dates from the middle of the 3rd century to the 7th century, and is characterized by the formation of the Japanese state. The number of kofun built thoughout the archipelago during this period reached a total of roughly 80,000.