AncientPages.com - Very little is known about England’s oldest printed Bible. It was published 1535 by King Henry VIII's printer. There are only seven surviving copies and one of them is kept at the Lambeth Palace Library, London. Now, historians have discovered intriguing hidden secrets inside the Bible.

At first, when examining the Bible, Dr Eyal Poleg, a historian from Queen Mary University of London was under the impression the Lambeth copy was completely clean, but later studies revealed this was not the case at all.

“Upon closer inspection I noticed that heavy paper had been pasted over blank parts of the book. The challenge was how to uncover the annotations without damaging the book" said Dr Poleg.

Dr Poleg sought the assistance of Dr Graham Davis, a specialist in 3D X-ray imaging at QMUL's School of Dentistry. Using a light sheet, which was slid beneath the pages, they took two images in long exposure - one with the light sheet on and one with it off. 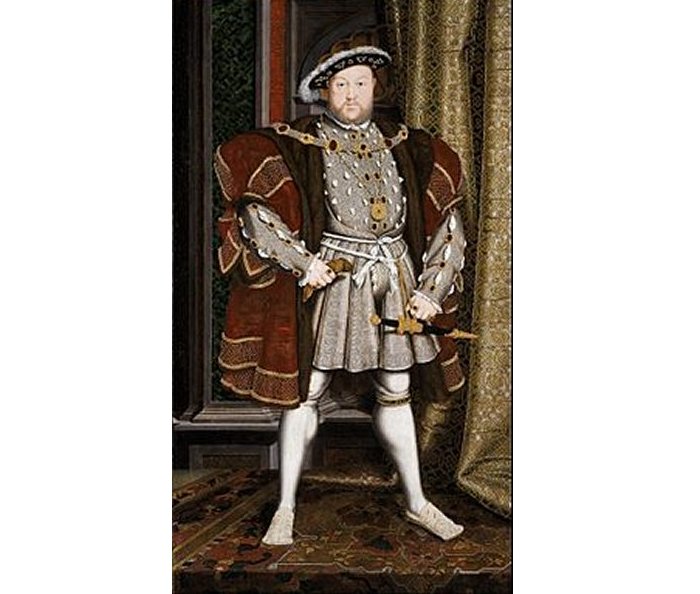 The annotations are copied from the famous 'Great Bible' of Thomas Cromwell, seen as the epitome of the English Reformation. Written between 1539 and 1549, they were covered and disguised with thick paper in 1600. They remained hidden until their discovery this year. According to Dr Poleg, their presence supports the idea that the Reformation was a gradual process rather than a single, transformative event.

"Until recently, it was widely assumed that the Reformation caused a complete break, a Rubicon moment when people stopped being Catholics and accepted Protestantism, rejected saints, and replaced Latin with English. This Bible is a unique witness to a time when the conservative Latin and the reformist English were used together, showing that the Reformation was a slow, complex, and gradual process."

The annotations were written during the most tumultuous years of Henry's reign. The period included the move away from the Church of Rome, The Act of Supremacy, the suppression of the monasteries, and the executions of Anne Boleyn, Thomas More, and John Fisher, as well as the Pilgrimage of Grace, which moved Henry to a more cautious approach. 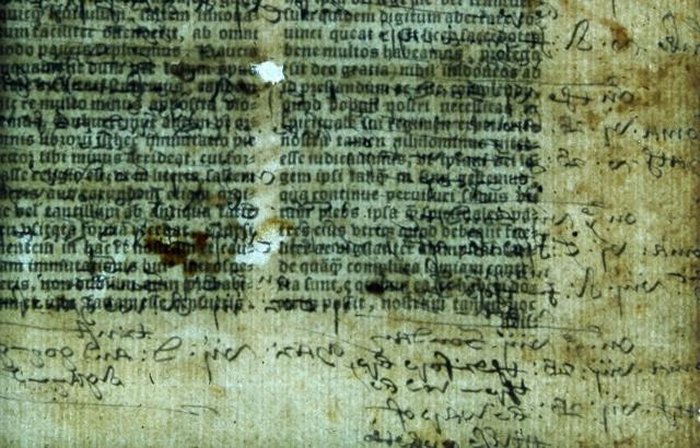 Hidden annotation are mixed with biblical text in a 1535 Latin Bible.

On the back page scientists uncovered a hidden, handwritten transaction between two men: Mr William Cheffyn of Calais, and Mr James Elys Cutpurse of London. Cutpurse, in medieval English jargon, means pickpocket. The transaction states that Cutpurse promised to pay 20 shillings to Cheffyn, or would go to Marshalsea, a notorious prison in Southwark. In subsequent archival research, Dr Poleg found that Mr Cutpurse was hanged in Tybourn in July 1552.

"Beyond Mr Cutpurse's illustrious occupation, the fact that we know when he died is significant. It allows us to date and trace the journey of the book with remarkable accuracy - the transaction obviously couldn't have taken place after his death," said Dr Poleg.

He added: "The book is a unique witness to the course of Henry's Reformation. Printed in 1535 by the King's printer and with Henry's preface, within a few short years the situation had shifted dramatically. The Latin Bible was altered to accommodate reformist English, and the book became a testimony to the greyscale between English and Latin in that murky period between 1539 and 1549.

"Just three years later things were more certain. Monastic libraries were dissolved, and Latin liturgy was irrelevant. Our Bible found its way to lay hands, completing a remarkably swift descent in prominence from Royal text to recorder of thievery."