A. Sutherland - AncientPages.com - Among many unsolved mysteries surrounding remarkable prehistoric structures of Armenia, there is a megalithic site of Karahunge ("Karahundj") covered with hundreds of vertical 1 - 2.8 m high megaliths of greatly varying form.

Not many people have heard of this ancient obscure and mysterious Armenian place.

The stone structures are scattered across the plain area at a height of nearly 1,750 meters above sea level and situated near the town of Sisian in the Syunik Province, and about 200 km (124 mi) south-east from Yerevan, the capital of Armenia.

This very ancient place called "Speaking Stones" or "Stones with Voice" has been abandoned and ignored for centuries.

It is an area of approximately 70,000 square meters covered with hundreds of vertically standing basalt stones. 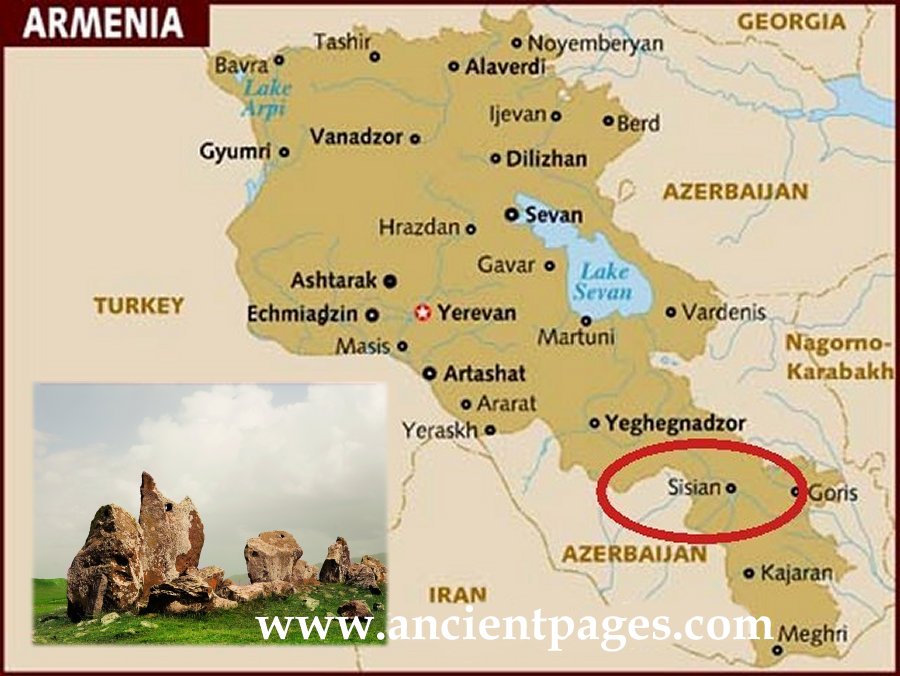 According to a recent scientific estimation based on ancient observations of definite stars, it has been estimated that the observatory was used during 7700-2200 B.C., for about 5500 years.

In 1994, scientific research in the area was undertaken by Professor Paris Herouni, a member of the Armenian National Academy of Science and President of the Radiophysics Research Institute in Yerevan. A series of expeditions have focused on one goal, particularly - investigation and solving of the mysterious past of Karahunge, most likely the world's first astronomical observatory, where solar and lunar eclipses were correctly predicted and its calendars already prevailed in this region.

A thorough exploration of the arrangements of stone settings proved that millennia ago, Karahunge was used as a powerful, fully functional observatory with a variety of unique astronomic instruments that enabled very accurate solar, lunar and stellar positional calculations.

Among more than two hundred stones, there were as many as eighty-four of them marked with carefully prepared holes measuring 4-5 centimeters in diameter and pointing in different directions of the horizon and outer space. Amazingly, the holes are placed near their thinnest parts of the stones weighing up to 10 tons! 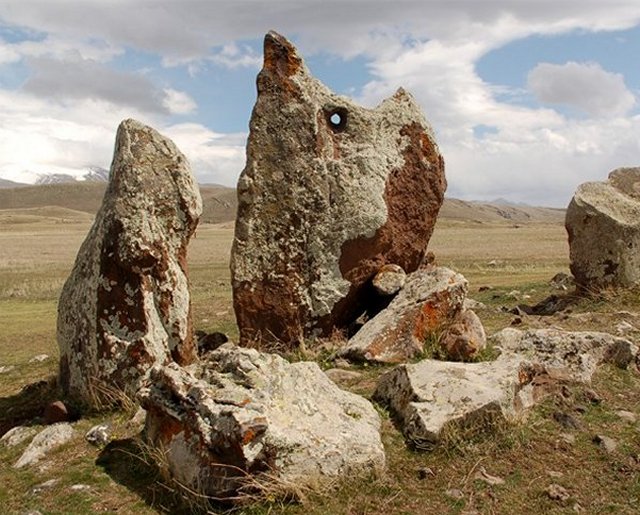 The ancients used dolmens and megaliths to measure the world they were living in, making geodetic surveys by the stars and some of the Karahunge's megaliths show clear signs of being carved into definite shapes and also have cupmarks for the stars to which they are oriented, according to Prof. Herouni.

His research showed that one can pinpoint a spot within a spot and it is extremely accurate, so it would have made the telescopes amazingly accurate for that time and even for today.

Accurate readings of the motion of the Moon, Sun, and stars, were taken using four independent astronomical methods based on the laws of the changes of the Earth's axis precession and incline.

The position of the standing stones and the holes support the theory that Karahunge served as a very sophisticated astronomical observatory, an instrument of great accuracy with stone arms reaching to the South, North, and Southeast, used to plot celestial objects and chart their apparent movements.

Karahunge also served as the holy temple of god Ar or Aramazd ("Great and courage Aramazd") enclosed in a winged disk or wheel) - Master of all Armenian gods, the father of all gods and goddess, the creator of heaven and earth. 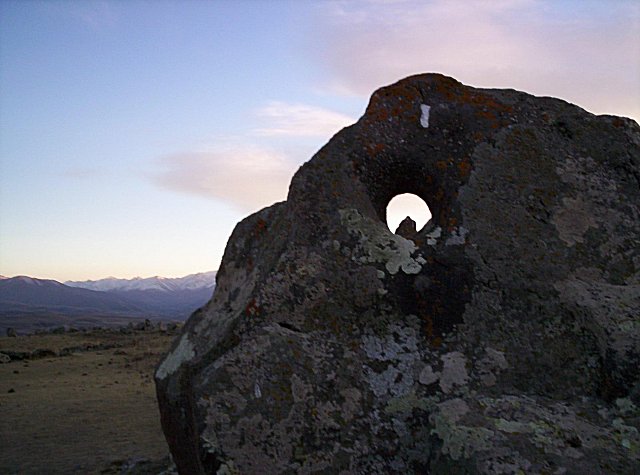 Karahunge was used as a powerful, fully functional observatory with a variety of unique astronomic instruments

To the Greeks, this god was known as Zeus, the supreme god, the Architect of the Universe, Creator of Heaven and Earth.

Myths and legends tell how Zeus the "Thunderer", was hovering among the stars hurling his thunderbolts causing thunder in the clouds and trembling of forests and mountains. He was worshipped in Armenia as Aramazd, one of the most revered gods, the flying god appearing in the skies in his flying eagle.

Aramazd was depicted on coins with thunderbolts. Also, other gods were described as "thunderers" and were often portrayed with a powerful weapon in the form of a thunderbolt.

Sky-worship was the fundamental religion for the ancient Armenians in the same way as it was for other peoples. The high priests, those spiritual rulers, who diligently served Aramazd (Zeus) or his counterpart in other parts of the world, scanned the heavens from mysterious and full of secrets ziggurats, lofty towers, megalithic sites like Stonehenge or Armenia's Karahunge and sacred mountain peaks all over the world.

Their proper rituals secured peace from the sky gods and gave protection from hostile forces that accompanied a human being from the cradle to the grave.

Worship of Aramazd declined and collapsed with the arrival of Christianity. Armenia was the first nation to adopt Christianity as it’s official religion (301 A.D).