Conny Waters - AncientPages.com - A large number of artifacts discovered in rescue excavations of a Thracian burial mound include an ostrich egg turned into a vessel and a gold-plated silver fibula featuring the Thracian Horseman deity. 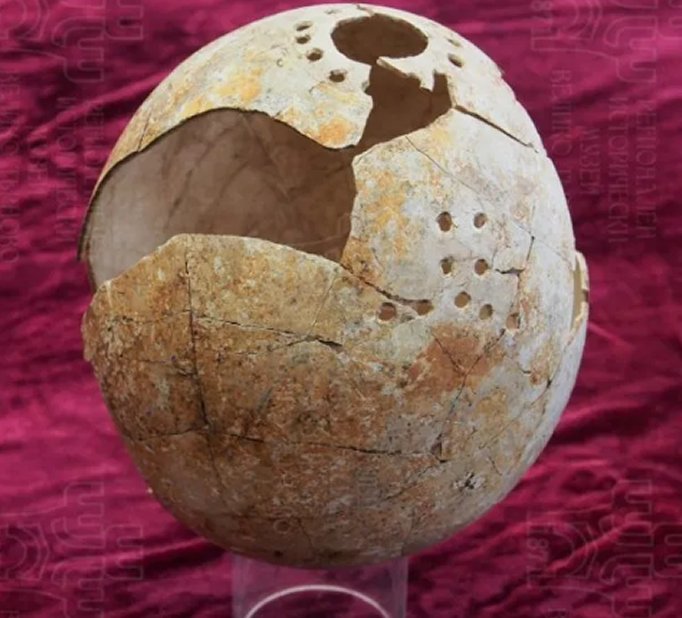 The ostrich egg vessel – of which only the ostrich egg has been found – was dismantled before it was laid in the Thracian warrior’s grave, possibly as part of a burial ritual. Photo: Veliko Tarnovo Regional Museum of History

The Thracian burial mound - 50 meters in diameter and 1 meter tall - from the Roman Era is located near the St. Peter and St. Paul Monastery, Lyaskovets Municipality, in Central North Bulgaria. It dates back to the 2nd – 3rd century AD.

The ostrich egg vessel found in the Thracian – Roman warrior’s grave is the only ostrich egg to have been discovered during archaeological excavations in Bulgaria.

It was imported from the African or Asian provinces of the Roman Empire and was deemed rather exotic at the time. The ostrich egg vessel dates back to the end of the 2nd century AD – beginning of the 3rd century AD, according to Archaeology in Bulgaria.

Before the ostrich egg vessel was placed in the grave, it was ritually taken apart, and its metal parts were removed, the archaeologists say, noting that the reason for that remains a mystery. All of Ancient Thrace south of the Danube was conquered by the Roman Empire in 46 AD, with the Thracian aristocracy and population becoming well integrated into Roman life.

The team led by archaeologist Kalin Chakarov from the Regional Museum of History in Veliko Tarnovo has excavated a total of 19 graves in the burial mound, the Veliko Tarnovo Museum has announced.

Most of the graves date to the middle of the 3rd century AD. The deceased were cremated, and their ashes were laid in specially designed chambers with numerous burial gifts and personal belongings.

The most intriguing finds are from the central grave of the burial mound near Bulgaria’s Lyaskovets, which is 3 meters long and 1.2 meters deep. 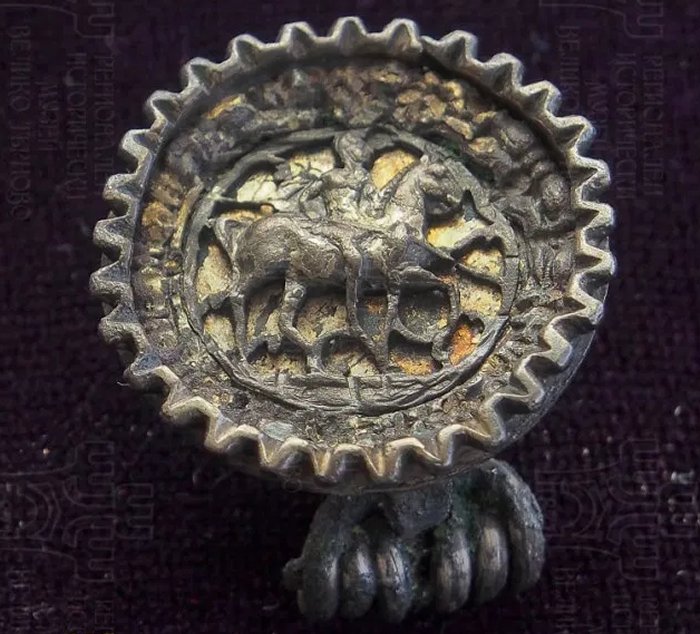 The silver gold-plated fibula featuring an image of the Thracian Horseman, the supreme deity of the Ancient Thracians, is the only one of its kind to have been discovered in Bulgaria. Photo: Veliko Tarnovo Regional Museum of History

It was inside it that the archaeologists found an ostrich egg, which used to be a vessel with parts made of leather or wood, as well as silver fibula with a gold coating bearing an image of the Thracian Horseman, the supreme deity of the Ancient Thracians.

The Thracian Horseman fibula is the only artifact of its kind to have ever been discovered in Bulgaria.

Another very interesting artifact from the main burial is a jug featuring a depiction of a human mask.

Other finds from the Thracian Roman-era burial mound near Bulgaria’s Lyaskovets include a warrior’s belt decorated with silver appliques, two gold earrings, pottery vessels, several lacrimaria (unguentaria) (vessels for collecting tears as part of the burial rituals), a total of 30 copper and bronze coins from the first half of the 3rd century AD, and a worn-out coin from the beginning of the 2nd century AD.

Most of the coins were obols, i.e. a coin placed under the tongue of the deceased to be found by Charon, the ferryman of Hades, who, according to Ancient Thracian, Greek, and Roman mythology, carries the souls of the newly deceased across the rivers Styx and Acheron into the underworld. 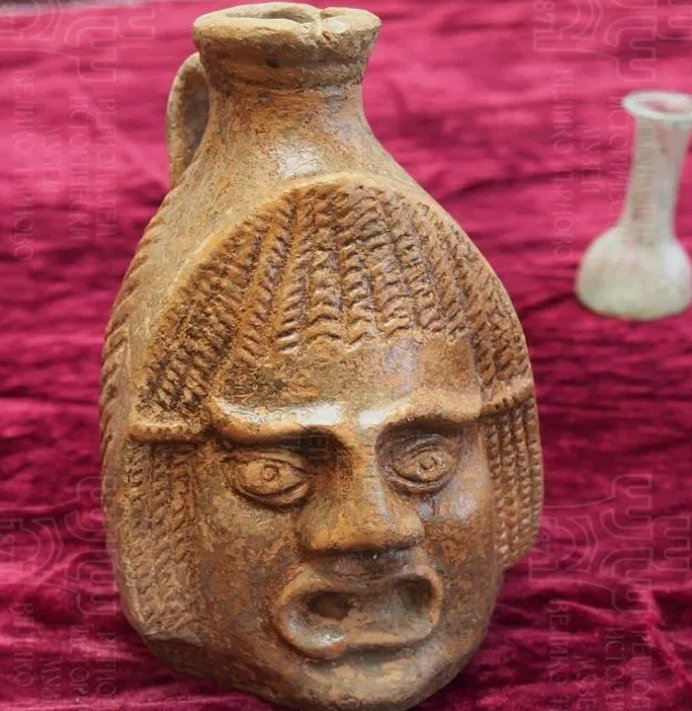 The pottery vessel decorated with a human face mask is another remarkable artifact from the burial mound near Bulgaria’s Lyaskovets. Photos: Veliko Tarnovo Regional Museum of History

Most of the discovered pottery vessels are deformed or were no longer in use at the time of the burials.

The archaeologists hypothesize that the man buried in the mound’s main grave may have been a warrior of Thracian origin who completed his service in the Roman military and returned to his home place near the major Roman city of Nicopolis ad Istrum.

“The fibula is extremely expensive. It was custom-made, probably in the atelier of some Aegean craftsman," Museum Director Tsarov has said.

“This is the first such adornment with a depiction of the Thracian Horseman, and it will be emphasized in the Antiquity collection of the museum," he has added.

The ceramic jug featuring a human mask depiction is reminiscent of decorative tiles with human faces found in the 2nd century AD Roman villa and ceramic factory near Bulgaria’s Pavlikeni in the same region. However, no other such vessel has been discovered so far.

The rescue excavations of part of the Thracian burial mound from the Roman Era near Lyaskovets and the St. Peter and St. Paul Monastery were carried out in November and December 2019. The digs were funded by private investor Plamen Chesnarov, whose firm Troya Stil owns the plot of the mound. The site itself is slated for the construction of a storage facility.

The archaeologists hope to be able to excavate the rest of the burial mound in 2020.