Jan Bartek – AncientPages.com – The mysterious Trzciniec culture is revealing more of its ancient secrets, but the latest discovery raises more questions than answers.

An unusual grave, a peculiar skeleton, ceramics and tools discovered in Kraków, Poland contribute to a better understanding of these Bronze Age people who inhabited regions in Poland and Western Ukraine, but certain findings remain an archaeological puzzle. 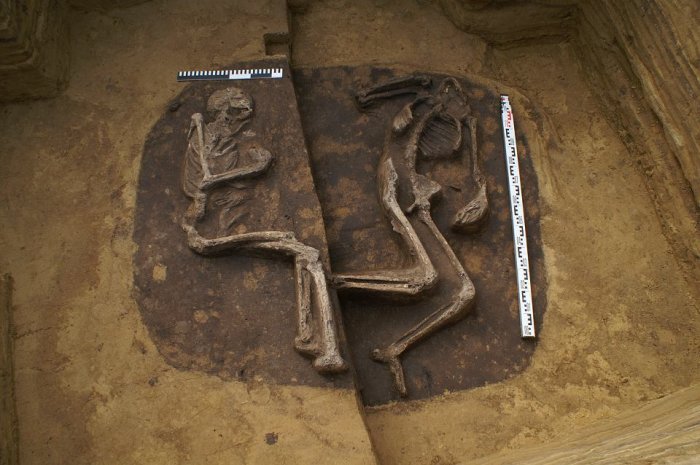 A discovered grave in Kraków contains the bodies of Trzciniec people, but the burial is unusual. Credit: Daria Rosińska, Instytut Prahistorii UAM

“The homelands of the Slavs are identified by the majority of Polish prehistorians with the so-called Lusatian (Lausitz) culture of the Bronze Age. The Lusatian culture spread over the are of two earlier cultures” and they are today known as “ the Pre-Lusatian culture, which covered the basins of Oder and “its contemporary and the Trzciniec culture in the region of the Middle and Upper Vistula, the Upper Warta, along the rivers Narew and Bug and in Volhynia.

The character of this culture makes it evident that it sprang from the fusion of the local culture and the southern influences.” 1

Before being replaced by the Lusatian culture, the Trzciniec culture existed between 1900 and 1200 B.C. and archaeologists ave made some significant discoveries that give insight into these peoples’ beliefs, traditions and daily life in general.

The Trzciniec culture produced beautiful ornaments made of either gold or silver. Their burial practices differed. Sometimes they created their dead, and on other occasions, they buried them in graves.

Polish archaeologists excavating in Kraków have discovered a settlement that was once inhabited by the  Trzciniec people. No buildings or traces of houses were found because the Trzciniec culture probably used wood and the material could not survive all this time. 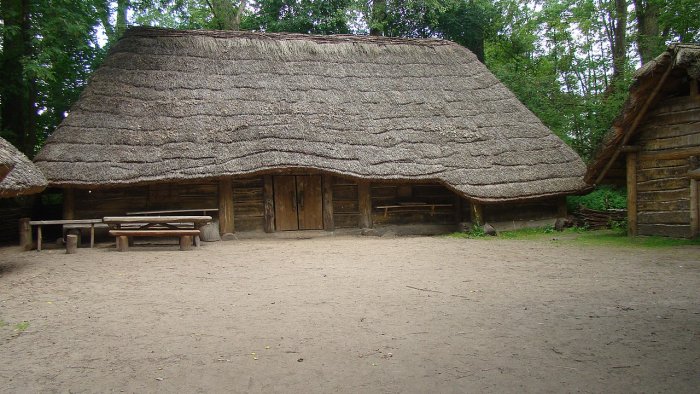 This is a reconstruction of a house built by the Lusatian culture.  The Trzciniec culture built similar houses which is why archaeologists couldn't find remains of buildings at the excavated site. Credit: Public Domain

However, an important archaeological discovery was made in the area. Scientists unearthed an ancient grave that contained two people. Inside this unusual burial was a man who had a flint arrowhead stuck in his elbow.

Archaeologist Łukasz Skolasiński from the University of Adam Mickiewicz in Poznań explained the man had spent several years living in a cave. One of his hands was shorter than the other, and he was buried in an unusual way with his arms outstretched and his head tilted back strongly. 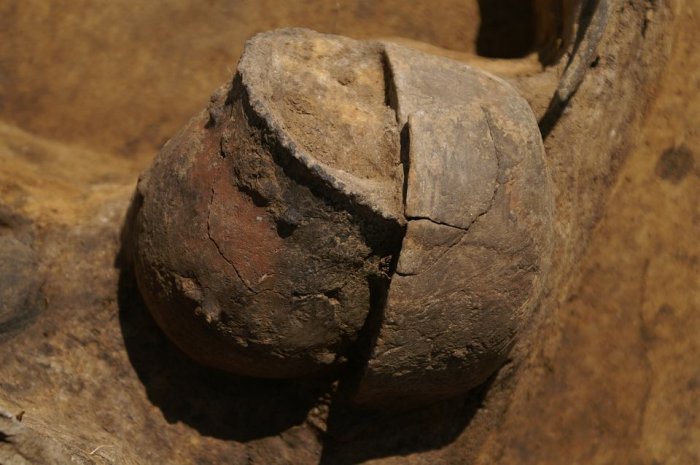 The location of the grave puzzled scientists. Instead of being put to rest at the cemetery, the man had been buried in a pit inside the settlement. This was not in accordance with the common burial practices of the Trzciniec culture. So what happened? 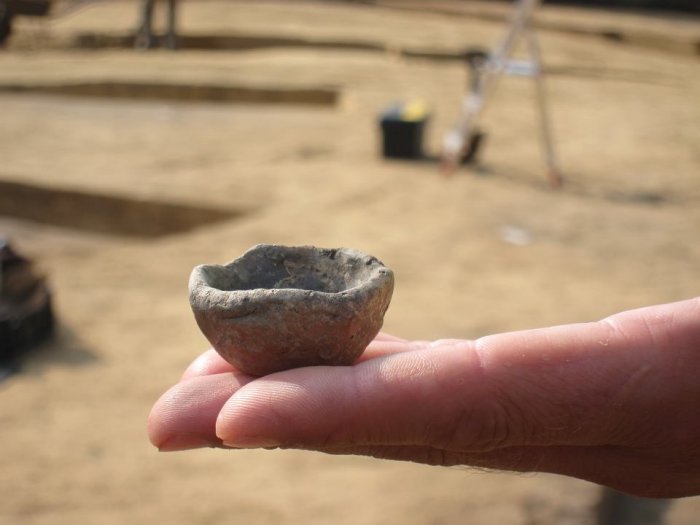 A small bowl made by the Trzciniec people found at the site. Credit: Dorota Gut

The discovery of this mysterious ancient grave made archaeologists wonder whether the man had perhaps been a criminal, outcast or perhaps died during a time when members of the Trzciniec culture were forced to leave their settlement for unknown reasons.

The remains of the Trzciniec man will be studied by scientists in Poznan, and maybe they will be able to reveal more what caused his death, and why his body never reached the cemetery.