AncientPages.com - A massive ancient tomb recently opened in northern Greece was likely a monument to Hephaestion, the close companion of Alexander the Great, experts working on the monument said Wednesday.

"We surmise it was a funerary heroon (hero worship shrine) dedicated to Hephaestion," the site's head archaeologist Katerina Peristeri told reporters, adding however: "I do not know if he is buried inside."

According to ancient historian Plutarch, when Hephaestion died suddenly in Ecbatana, Iran, "Alexander asked (his architect) Deinokrates to erect shrines all over the country," she added. 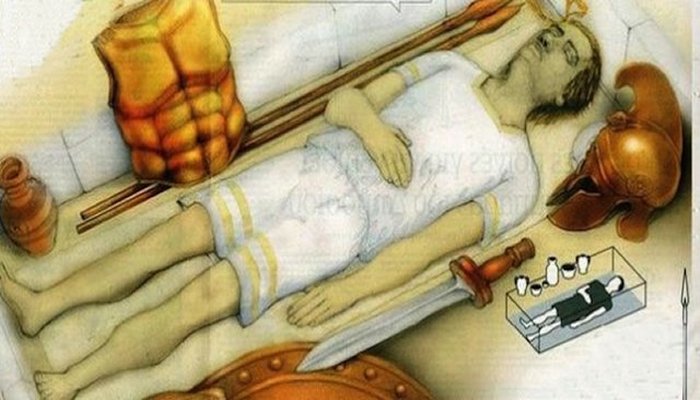 Analysis of the skeleton discovered in an underground vault has revealed the buried man was of medium height, with pale skin and brown or red hair (illustrated)

The tomb at Amphipolis, some 60 kilometres (37 miles) from the northern city of Serres, is the largest ever discovered in the country,' reports Yahoo News.

It was dug up in 2012 and opened last summer amid speculation that it was built for someone close to Alexander like his mother Olympias or wife Roxana. 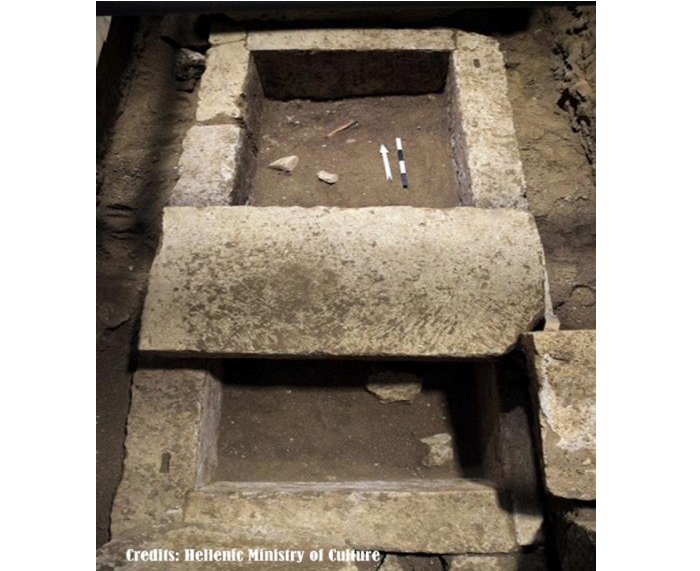 The skeletal remains were found both inside and outside the rectangular stone-lined cist (pictured), under the floor of the cavernous, vaulted structure that is 26 feet (eight metres) tall. They are undergoing DNA analysis

But a room-by-room search of the massive box-like tomb has failed to give conclusive answers to date.

Though the remains of an elderly woman were found -- raising hopes it could be Alexander's mother -- the bones of two men, a newborn baby and animals including a horse were also discovered.

Peristeri and her head architect Michalis Lefantzis on Wednesday said they had found three inscriptions with the word 'parelavon' (received) and Hephaestion's monogramme. 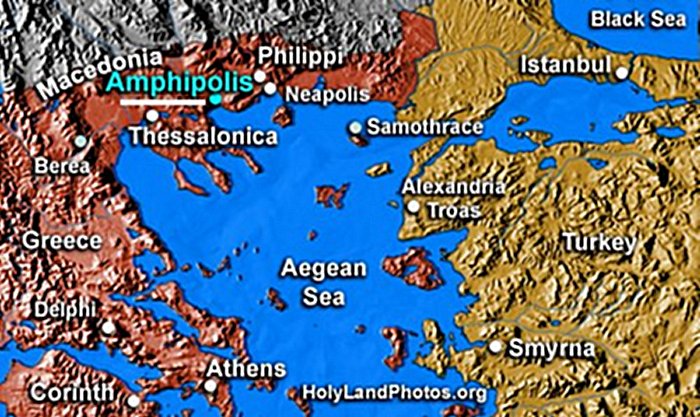 Peristeri's findings have been called into question by other archaeologists who claim the tomb was built under the Romans, not the Macedonians.

However, Peristeri insists the complex was built in the final quarter of the fourth century BC (325-300 BC)and was used until Roman times.

The tomb, measuring 500 metres (1,640 feet) in circumference and dug into a 30-metre hill -- was found to contain sculptures of sphinxes and caryatids, intricate mosaics and coins featuring the face of Alexander the Great.

Built on the banks of the river Strymon, Amphipolis was an important city of the ancient Macedonian kingdom under Alexander.

Alexander built an empire stretching from modern Greece to India. He died in Babylon at the age of 32 in 323 BC and was buried in the city of Alexandria, which he founded.

The precise location of his tomb is one of the biggest mysteries of archaeology.