Angela Sutherland  - AncientPages.com - According to Greek legends, Poseidon (equated with the Roman god Neptune) possessed a magical trident. When angry, the Greek god of the sea could cause storms, tsunamis, and earthquakes, submerge lands and islands and split rocks with his magical trident. 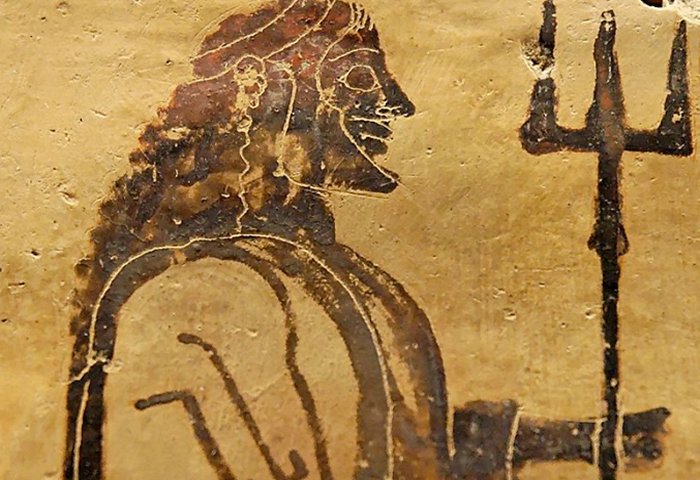 Poseidon with his trident, Corinthian plaque, 550–525 BC. From Penteskouphia. Public Domain

With this powerful three-pronged spear, he could finally bring back peacefulness again. Poseidon's divine trident was created by the Cyclops, the giants skillful in metallurgy.

"In the hands of Poseidon or Neptune, the trident has a practical use, since it emulates the shape of one of the earliest fishing implements. Poseidon uses it to control the seas, so it is a symbol of authority. Because of its association with water, the trident is the alchemical symbol for this element.

"Where a trident has three prongs of even length, it is a secret symbol of the Cross of Christianity. However, Satan is often seen harrying the souls in hell with a trident. It is likely that he is depicted with it in order to associate him with the pre-Christian Gods who also used it.

This versatile three-pronged tool is also a fire symbol—the prongs look like flames—and it is, therefore, a symbol of thunderbolts and lightning. As such, many of the sky Gods carry a trident, too. These include Thor or Wotan of Norse mythology..."  1

In Japanese mythology, a Kongo (kongose) is another, spectacular, trident-shaped staff, which emits bright light in the darkness. The Kongo grants wisdom and insight, and today is not considered a weapon but rather a kind of ritual object called the Kongo vajra (meaning thunderbolt).

In Japanese legends, the Kongo vajra was a formidable weapon that belonged originally to the Japanese mountain god Koya-no-Myojin.

However, the Kongo remains among many other puzzling objects that have survived to our time. 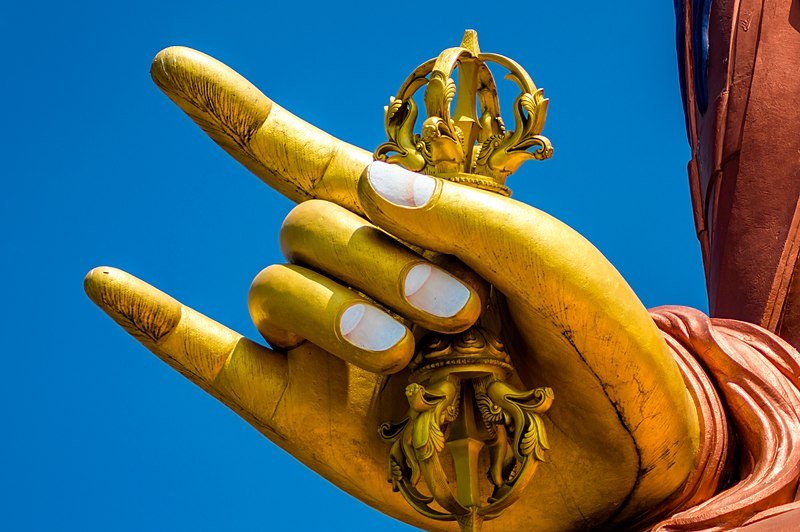 In Vajrayana Buddism, the traditional vajra is used in various rituals. source

This weapon-like staff has usually sharp, dagger-like prongs, which number varies from one, three, five, and even more prongs on each end. It is said that the three prongs of the trident symbolize the past, present, and future, or possibly also Heaven, Earth, and Hell.

Some of them are beautifully decorated with Buddhist jewel designs.

Legend has it, this Kongo is the equivalent of the Sanskrit Vajra, which is called ‘dorje’ in Tibet, in China - 'jingang’ and in Mongolia – ochir.

The trident of Poseidon had powers closely related to the sea and is deeply rooted in the beliefs of the people living near the sea or other large bodies of water. The Kongo Vajra, on the other hand, was believed to be particularly dangerous in the clouds as used by the gods linked with storms, lightning, and thunderstorms.

One such god is the ancient Vedic deity Apam Napata (“son of waters”) who dwells surrounded by waters, which give him gaining strength in them, is connected with rivers. And, at the same time, the name Apam Napata is an epithet of the fire god Agni who rides a ram and is holding the trident and is sometimes identified with him. Apam Napata is the Universal Self, the fire of glory (or the son of the ocean).

'Trishula' (Sanskrit for "triple-spear") is a mysterious symbol of great importance in India.

The Hittite weather-god Teshub, wielding a thunderbolt and an ax. A bas-relief at Ivriz. Image credit: Maur - Public Domain

In Hindu mythology, 'trishula'  was the weapon of Shiva, the destroyer, the most powerful god of the Hindu pantheon, and one of the members in the Hindu Trinity. The trident in his hand possessed three prongs, which reflected Shiva’s function as creator, destroyer, and preserver. It also symbolized Shiva's monogram or was the representation of the Law (Dharma). Vishnu worshippers believed that the trident is their god's footprint.

Worshippers of Shiva paint the sign of the trident on their foreheads as a visible symbol.

The Sanskrit Vajra was the indestructible lightning-diamond pounder of Indra, a Vedic deity in Hinduism, the chief god of the heavens and of the East.

Another holder of the trident was the great Genghis Khan, Mongolia’s great warlord. The trident was his personal tribal sign (tamga) and this sign was crowned with the sacred banner-Sulede (sulde) - the Genghis Khan standard (trident over nine hanging bunches of yak tail hair). 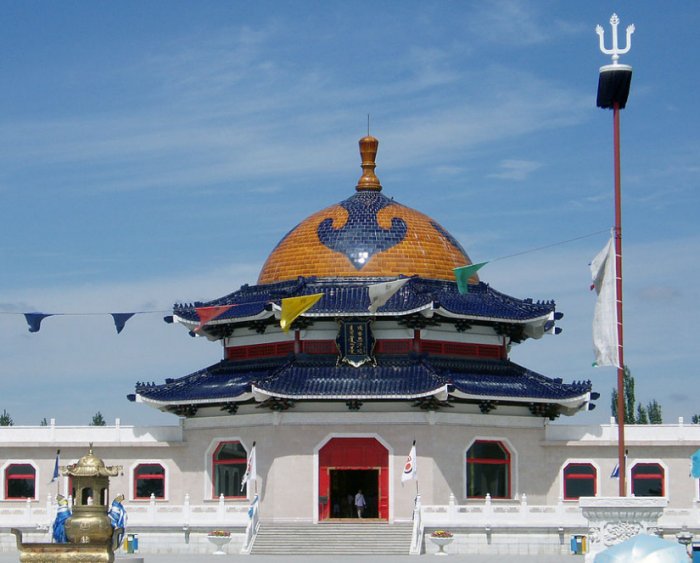 The trident sign that decorates the stele installed at Genghis Khan’ s birthplace,  was believed to have brought fortune and triumph to Genghis Khan's cavalry some 800 years ago.

One legend has it that Genghis asked for power and help from God and suddenly a dazzling light flickered in the sky and the trident-like weapon floated over the heads of his army.

Gannon A. The Iconography of Early Anglo-Saxon Coinage: Sixth to Eighth Centuries