Conny Waters - AncientPages.com  - A giant underground structure known as Dolmen de Soto is finally beginning to reveal its secrets. This huge 6,000-year-old subterranean structure is often referred to as Spain’s underground Stonehenge and its ancient history is fascinating. The ancient dolmen was buried beneath a mound 60 meters in diameter. 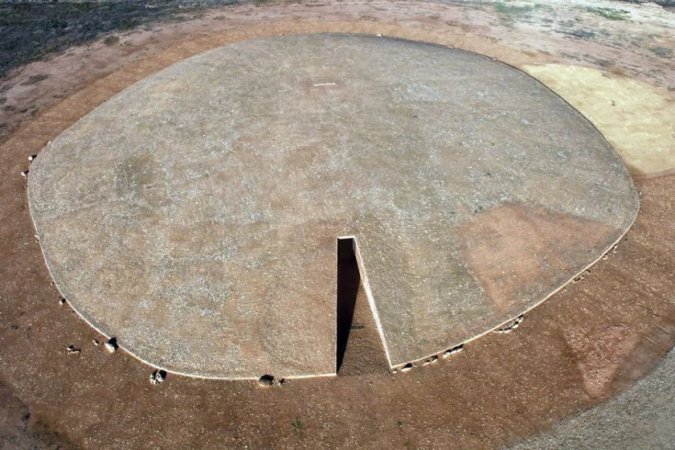 Dolmen de Soto is unique in many ways and the ancient structure remains an enigma. What was the purpose of Dolmen de Soto? How was it constructed? Why were only a few people buried in this large underground complex?

Discovered in 1922 by Don Armando de Soto the underground structure is located in Zancarrón, in the municipality of Trigueros (Huelva) in southwestern Spain.

Recent studies of Dolmen de Soto reveal the history of this place is remarkable.

“If it had been located in the United Kingdom, for example, it would already be one of the most visited tourist sites. It is simply spectacular,” says Mimi Bueno-Ramírez, a professor of prehistory at Alcalá de Henares University in Madrid.

Using modern technology scientists have discovered ancient drawings on the stones. They depict figures carrying axes, staffs and daggers. As El Pais reports, “many of the figures are represented by geometric red-and-black drawings, set against a white background.”

“There is not a single megalithic monument in Europe that has so many armed figures on its walls,” says Bueno-Ramírez.

Inside the mound, experts have found a metalworking workshop dating back to 3,000 BC, which indicates that the drawings of the weapons coincided with the discovery of metallurgy.

The mound is surrounded by “a circle of stones with a diameter of 65 meters. Inside there is gallery made up of 63 stone pillars, a frontal slab and 30 other stones that cover it. An underground passage, measuring 21.5 meters, starts off narrow then widens to three meters in width and height as it reaches the back of the monument.”

The purpose of Dolmen de Soto is unknown, but most likely it was a necropolis.

It's perplexing that very few people were put to rest here. According to Andalucia, “only eight bodies were buried in seven different places. They all appear crouched down near the wall, each of them with an orthostat on which there are a few engravings that represent the image of the deceased, his protecting totemic sign or some of his weapons.”

“They dismantled a previous circle [as happened with Stonehenge in England] and transported it to the interior of the mound. We don’t know their reasons, but the most plausible one is that it [the dolmen] was the center of a large necropolis,” explains Bueno-Ramírez. 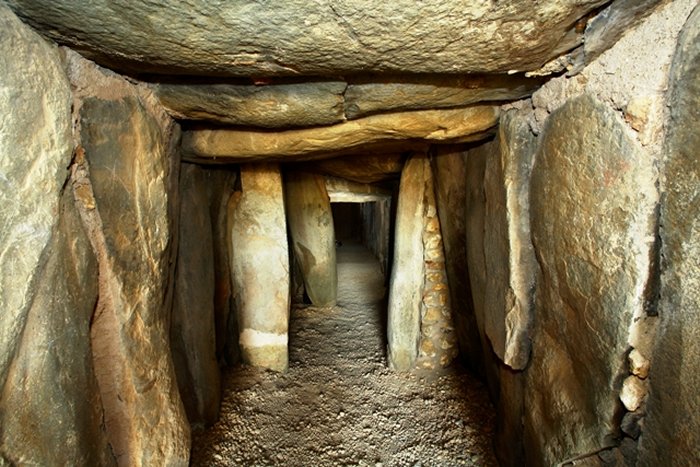 The stones were much taller than the mound. The rocks were cut and chiseled so they could be transported underground.

“The most striking case is the head stone. It appeared very fragmented near the top, some of the ancient drawings were even cut off. We managed to show that this stone must have been around six meters tall,” says Bueno-Ramírez.

Dolmen de Soto was not only used by its builder, but also by later ancient cultures that lived in this region. Professor Bueno-Ramírez said that the more recent inhabitants of the complex wanted to put their mark on the ancient monument “to reinforce their prestige.”

If we had access to the ancient bodies found at the site, we could learn more about this fascinating place. Unfortunately, the eight bodies and their belongings were taken from Dolmen de Soto and transported to United Kingdom. Their whereabouts are unknown and as Professor Bueno-Ramírez said, it’s a pity these human remains and artifacts were never analyzed.

A part of Dolmen De Soto’s history was lost.