Canute Lavard was a Danish prince  and the ancestor of the Valdemarian Kings and of their subsequent royal line. 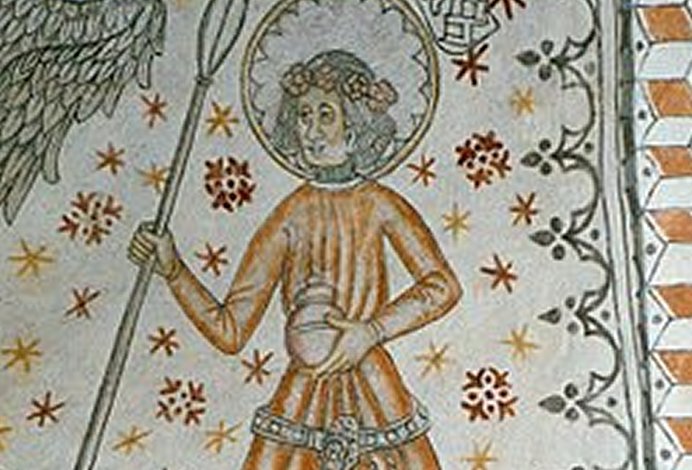 Canute was the only legitimate son of Eric I of Denmark (ca. 1103) and the first member of the Danish royal family who was attracted by the knightly ideals and habits of medieval Germany, indicated by his changing his title to Duke of Schleswig.

His appearance made him a popular man and a possible successor of his uncle, but he also acquired mighty enemies among the Danish princes and magnates, who apparently questioned his loyalty and feared his bond with Emperor Lothair III, who had recognized him as sovereign over the western Wends. Whether these suspicions were just or not is impossible to say.

Both Niels and his son, Magnus the Strong, seem to have been alarmed by Canute's recognition by the emperor.

On 7 January 1131, Canute was trapped in the Haraldsted Forest near Ringsted in Zealand and murdered by Magnus.

Ringsted Abbey, one of the earliest Benedictine houses in Denmark, became the initial resting place of Canute Lavard.

In 1157, Canute Lavard's remains were moved into a new chapel at St. Bendt's Church in Ringsted. A chapel was erected at the site during medieval times to commemorate his death but disappeared after the Reformation.

The ruins were rediscovered in 1883. In 1902 a memorial in the form of a 4-metre crucifix was erected near the site of the death of Canute Lavard.

Some sources consider the death of Canute to be a murder committed by Magnus; some attribute it to Niels himself. The death initiated a civil war that lasted until 1157, ending only with the triumph of Canute's posthumous son Valdemar I. The fate of Canute and his son's victory formed the background for his canonization in 1170, which was requested by the same Valdemar.

Canute Lavard was canonized in 1170 and his feast day (Knuts dagen) is celebrated on the day of his death, January 7.