David Tee - AncientPages.com  - Isabel Neville’s life was not a long one. She lived between September 1451 and December 1476. Yet in between those dates, she lived an interesting life. Isabel was the older sister of Anne Neville, born June 1456, and both girls seemed to have spent their childhoods in relative luxury at Warwick Castle.

Not much is known about her early years but her claim to fame came when her father Richard Neville, the Earl of Warwick, wanted to marry Isabel to the brother of King Edward IV, April 1442 to April 1483. 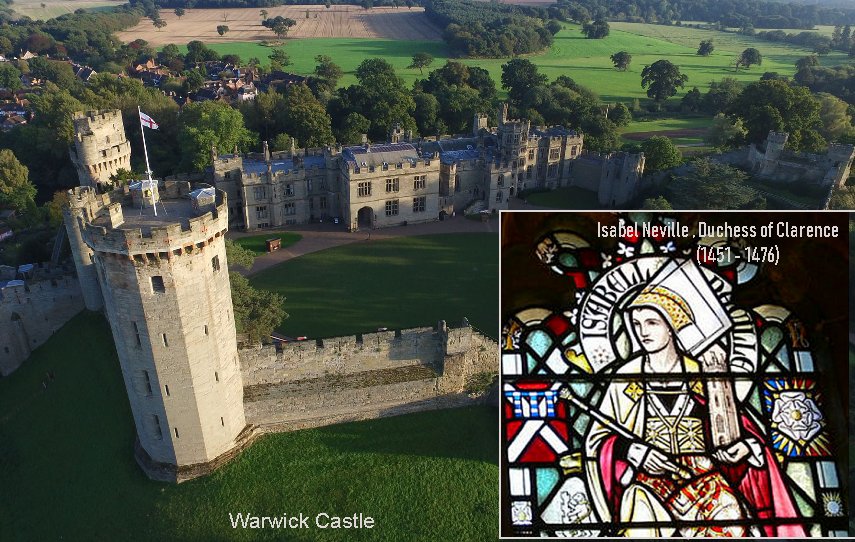 Other than this notable event, Isabel’s life remains in obscurity.

Once Richard Neville, Nov. 1428 to 1471, made the decision to wed his oldest daughter to the King’s brother there was a lot of opposition to the match making. Edward IV opposed the idea the strongest as he did not want to have Richard Neville any closer to the throne that he already was.

Not taking no for an answer, Richard Neville, decided to go ahead with his marital arrangement in spite of the King’s objection. The wedding of Isabel to George Plantagenet, Duke of Clarence, October 1449 to February 1478, took place in secret. The Archbishop Neville performed the ceremony.

The union produced an unholy alliance between George and Isabel’s father. They started a rebellion against Edward I that was soon crushed.

Yet this was not the only event that was produced by this secret wedding. Isabel and George were able to have 4 children throughout their short lives. The first child, born in 1470, does not have his or her name or gender recorded by history. All that is said about him or her is that he or she died at sea.

The second child, Margaret Pole lived between August 1473 and May 1541. She married Richard Pole in approx. 1494 and was executed by Henry VIII in May 1541. A third child, Edward was born on February 25th, 1475 and he became the 7th Earl of Warwick. Imprisoned in the Tower of London, he was executed on November 28th, 1499 by Henry VII for trying to escape his imprisonment. It may have been a trumped up charge.

A final child, Richard was born to Isabel and her husband Richard, was born October 1476 but was not granted a long life. He died at Warwick castle on January 1, 1477.

What Did Cause Isabel’s Death?

This is the sole mystery surrounding the life of Isabel Neville. History has it that her husband Richard accused one of her ladies in waiting of murder. He was so convinced that Ankarette Twynyho. one of Isabel's servants, killed Isabel that he had her tried and convicted of the crime of murder.

But later historians feel that Isabel was not murdered. They have concluded from looking at the evidence that Isabel died from consumption or childbed fever. They come to this conclusion because Ankarette’s  grandson went to Edward IV with a petition to prove his grandmother’s innocence.

Roger Twynyho received the pardon as his petition recorded the circumstances surrounding Isabel’s death. While it is important evidence, there is no real corroborating evidence to support the claim made by the grandson.

Isabel’s actual cause of death may be murder, or it may have been committed by natural causes.

Isabel may have only lived between September 1451 and December 1476 but her short life did not deprive her of a role in English history. She was the daughter of a powerful Earl, the wife of an ambitious brother to the current King and had two of her 4 children play some part in English history.

Her title of the White Queen may have come through her husband who was one of the leaders of the white Lancasters. Yet that may be another mystery surrounding Isabel. Her sister Ann Neville and Elizabeth Woodville definitely held that title.

How she received that title is not stated very clearly in some historical records. Once, that mystery is cleared maybe Isabel will be seen in a better light.