David Tee  - AncientPages.com - It has been said that legends and myths are based on real events. They are only exaggerated to meet the fantasy needs of the reader or listener to the different tales. This means that while Perseus may not have been a child of a god or had access to magical powers, he may have been a real person who did courageous acts. 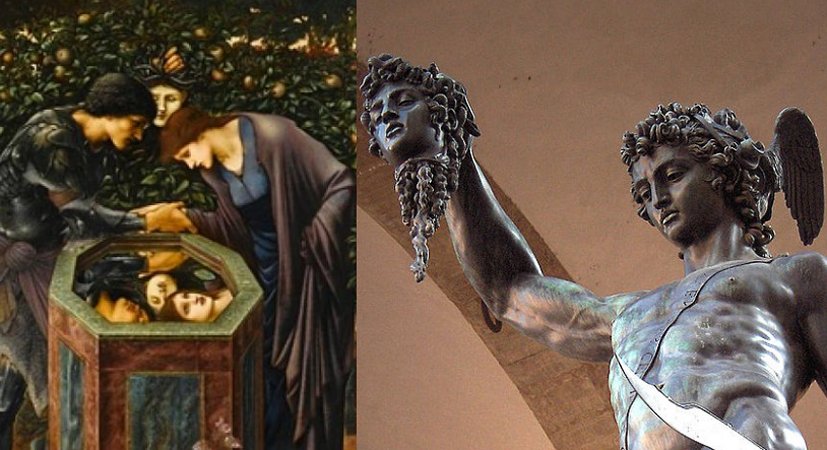 Left: Edward Burne-Jones: The Baleful Head, 1885, Staatsgalerie Stuttgart. This part of the series plays with the theme of the reflected gaze, as Perseus has Andromeda look at the Gorgon's head, but only as reflected in the well. Credit: Public Domain - Right: Perseus by Benvenuto Cellini, Loggia dei Lanzi, Florence, Italy. Credit: Public Domain

As far as can be ascertained, the tales of Perseus and his adventures is one of the oldest Greek legends to date. This would indicate that if the tales were based on true adventures, though less magical, the original Perseus would have lived in very early antiquity.

Perseus’ story starts with his grandfather, Akrisios or Acrisius, a Greek king who was shown a prophecy. That prophecy indicated that the King would one day be killed by his grandson. Scared by this prophecy, Acrisios had his only daughter, Danae, locked up in what seemed like an inescapable jail. It was underground and lined with brass walls.

This fortification seemed, to Acrisios, to be safe enough, but Zeus had other ideas. As the story goes, Zeus transformed himself into a golden rain and was able to enter the jail without detection. As a result of Zeus’s and Danae’s union, Perseus was born.

When the king found out about the birth, he could not bring himself to directly harm the boy, so he had Danae’s nurse killed and then sent his daughter and grandson away. They ended up on the island of Seriphos, whose ruler eventually fell in love with Danae.

Perseus did not like the new attention paid to his mother, so he guarded her 24 hours a day. Even though he was as strong, wise and gifted as Zeus’ other children, he could not keep up his vigil forever. This led to the beginning of his many great adventures.

Medusa – Cursed By Athena And Killed By Perseus

Polydectes used trickery to get Perseus where he wanted him.  The King of Seriphos through a great feast and asked his guests what kind of gift they would give him if he asked for a gift. Perseus boasted that he would bring the King the head of Medusa. The monster whose facial features automatically turned people into stone.

The King took Perseus up on his boast and accepted the gift, with the caveat that if Perseus failed, Polydectes would take his mother. The King, of course, thought that he had a win-win situation here. If Perseus is turned to stone, he gets Danae. If Perseus returns empty handed, the King still gets Danae. It was thought that it was highly unlikely that Perseus would win over Medusa.

Unknown to the King, Athena and Hermes decided to help Perseus. They gave him a gold shield and a helmet that rendered Perseus invisible. They also gave him a specially designed bag to hold the Medusa’s head once it was severed. 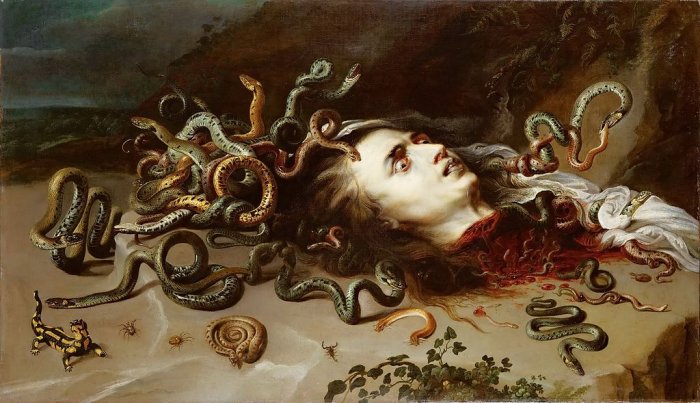 The reason Medusa was so ugly was that she was cursed by the gods because growing up she was very vain. Her appearance was punishment for thinking too highly of herself. With the help given to Perseus, he was able to defeat Medusa without damaging himself.

After fulfilling his boast, Perseus started his voyage home to save his mother from Polydectes. As he was making some headway, his path crossed a damsel in distress. Andromeda was beautiful and her father, Cepheus had boasted that her looks surpassed all women including the Nereids.

But love wins out. Perseus fell in love with Andromeda the moment he saw her. He offered to save the girl and destroy the sea monster if he would be given Andromeda in marriage. The King agreed.

Perseus still had his gifts from the gods. He used them to get the sea monster in the right position and then he pulled Medusa’s head out of its special bag. The curse of Medusa still worked, and it worked on sea monsters as well. The creature was turned to stone. Perseus had almost saved Andromeda.

What he did not know was that Andromeda’s uncle desired her from himself. This did not please Perseus as Andromeda was now to be his wife. But in this battle Perseus had human help. His bride to be plotted with Perseus to defeat her selfish uncle.

Working hand in hand Andromeda and Perseus were able to get her uncle to look at Medusa’s head. When his eyes fell on the ugly face, he was turned to stone immediately.

In his absence, Polydectes had harassed and bothered Perseus’ mother. Displeased by this news, Perseus did not waste much time using Medusa’s head once again. When Perseus was presenting the head to the King, he positioned it in such a way that the King could not avoid Medusa’s cursed stare.

Polydectes immediately turned to stone and hi smother was saved from the king’s unwanted advances.

A Prophecy Is Fulfilled

It is not known if Perseus was aware of the prophecy or not. The myths do not say. But in Greek myths, oracles are not left unfulfilled. Upon hearing of the exploits of Perseus, Acrisios fled. He was afraid that his grandson would dispatch him like he had done to Andromeda’s uncle and Polydectes.

The fleeing did not help Acrisios. Perseus competed in an athletic competition held in Larisa in Thessaly. His wayward discus throw struck Acrisios and killed him, fulfilling the prophecy.

Perseus and Andromeda went on to rule in Tiryns and founded the city of Mycenae. They had four children, one of whom had a son named Hercules.

Kathleen Sears - Mythology 101: From Gods and Goddesses to Monsters and Mortals, Your Guide to Ancient Mythology