AncientPages.com - What if a single musical note could mean the difference between life and death?

A new sensor based on a 3,000-year-old African musical instrument can be used to identify substances, including a poisonous chemical sometimes mistakenly added to medicines.

An engineer at the University of California, Riverside built the device inspired by a mbira, or kalimba, a musical instrument originating in Africa made of graduated metal prongs attached to a soundboard.

The constructed device can accurately measure the density of any liquid. 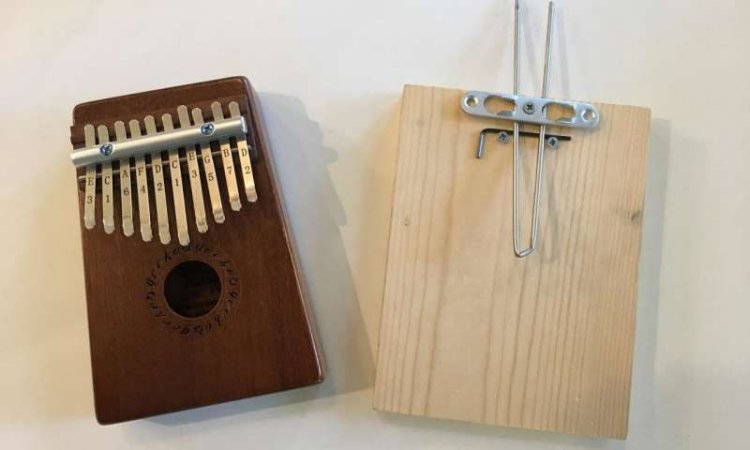 Mbira instrument next to a density sensor based on it. Credit: William Grover

The device, built by an engineer at the University of California, Riverside, and described in a paper published in ACS Omega, can accurately measure the density of any liquid. Comparing the density of a suspicious liquid medicine to the density of the known product can reveal whether or not the two medicines have the same ingredients.

Comparing the density of a suspicious liquid medicine to the density of the known product can reveal whether or not the two medicines have the same ingredients.

The research was inspired by the observation that frequencies of sound created by a musical instrument are determined by the instrument's physical properties. For example, the pitch of a guitar string is a function of the length and tension of the string.

"Could we add a sample to a musical instrument, measure the resulting change in the instrument's notes, and use this change to determine information about the sample and its properties?" asked William Grover, an assistant professor of bioengineering in UCR's Marlan and Rosemary Bourns College of Engineering.

Grover and his team modified a mbira. The prongs play different musical notes when plucked with the finger. By replacing the metal prongs with a length of bent metal tubing and injecting it with a liquid, Grover compared the frequency of the musical notes made by the filled and empty tube to measure the liquid's density. Empty, the tube played a G sharp note; when filled with water, it played an F sharp.

With scrap wood and tubing he found in his garage, Grover built a new device from scratch. Experiments determined the optimal mbira sensor tube had thin walls and a length no shorter than 50 millimeters. His students used the device to measure the density of everything from local river water to buffalo milk in India, but they soon settled on detecting dangerous medicines as the ideal first application for their sensor.

The researchers first confirmed their mbira sensor could tell the difference between harmless glycerol and deadly diethylene glycol. After filling the sensor with each substance, recording its musical notes using a smartphone, and uploading the recordings to an analysis website they created (mbira.groverlab.org), they found that glycerol and diethylene glycol make notes whose frequencies differ by 10 hertz.

This is too small a difference to notice by ear, but it's easily detectible by the website's software. It shows that someone using the mbira sensor and a smartphone could easily distinguish these two substances.

Ancient Viking Age Music Recreated – This Is What It Sounds Like

The researchers then tested six different batches of a popular cold and flu medicine purchased from various pharmacies in the Riverside area. All of the samples made the same musical note when loaded into the sensor. This suggests the medicine samples were identical and authentic, and that any sample of the drug making a different musical note must be chemically different from the authentic drug and may be counterfeit or adulterated.

The sensor could help drug companies or compounding pharmacists in the developing world verify bottles of glycerol that might have been mislabeled, unintentionally or not, by the manufacturer or distributor. It can also help consumers detect counterfeit drugs by comparing the density of a suspect sample to a known good sample of the same drug.

Measuring density as a musical note also presents the surprising possibility to write the frequency using musical notation easily interpreted by anyone who can read music, with little to no scientific training