Dr. Greg Little - AncientPages.com - The background of Tennessee’s ancient “Egyptian Temple” is not a great secret. But it appears to remain enigmatic to many who are interested in alternative archaeology as well as proof to others that ancient America was visited in ancient times by people from the Middle East.

I do believe that ancient America was populated by an astonishing blend of people migrating from many parts of the world over many thousands of years. And it’s possible that some ancient Egyptians made it to America.

I’m sure archaeologists will scoff at that idea, but all I’m saying is that it is possible. But the assertion that this particular site was “Egyptian” is a stretch—a long, long stretch based on just about nothing whatsoever.

The Egyptian Temple assertion was made solely on the speculations of a respected British manuscript curator after he saw a photo of the excavated mound in the “New York Times” in 1934. 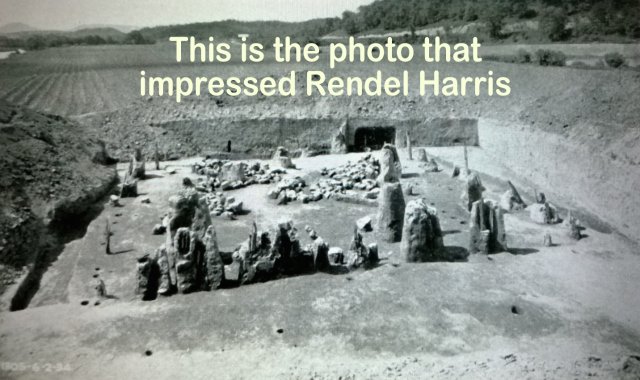 The British curator, J. Rendel Harris, was a respected biblical scholar and was 82 years old when he saw the newspaper photo. He was very impressed by the photo he saw in the newspaper article describing a site that had been excavated in Tennessee.

In 1935 he published a brief article about it entitled, “A Temple in Tennessee,” as part of essays he routinely issued.

Much earlier in his life Harris had become convinced that Egyptians visited America well before Columbus.
He thought that they initially visited the Bahamas and eventually moved into the Gulf of Mexico and up the Mississippi.

He also speculated that Egyptian traders took copper from the Americas back to the Mediterranean and that they established a large colony in East Tennessee.

The excavation of a building structure under a mound in Tennessee—and the photo from the excavation—was enough to convince him he was correct.

When the photo was published, Harris saw what looked like standing stones forming the perimeter of a square building.

It had been excavated from under what is assumed to be a Hopewell-era mound, but it’s more likely it was Mississippian. There were two large “standing stones” next to each other Harris interpreted as pylons, which was a common feature in Egyptian temples.

That, in essence, is the story of how Tennessee’s Egyptian temple came to be. Over time it has been embellished, altered, and made increasingly mysterious.

It is cited as evidence of a cover-up of ancient Egyptians in America by Tennessee Valley Authority “Irrigationists”!!??

Indeed, the mound sites involved have been covered by water but I’m utterly clueless why anyone would have applied the term “irrigationists.”

In September 2007 an article in “Ancient American” retraced the basics of the story and brought it back to life. However, various internet sources assert that the excavation of the mound was halted when the Egyptian temple was found and that Harris, described as an archaeologist specializing in Egyptian sites, was called in to finish the work.

It is also widely asserted that here were two huge standing stones forming an entranceway into this “temple” and that the walls of the building were stone.

None of this is true, but the story is intriguing. Other internet sources claim that many of the excavated sites near the temple had large standing stones, many in straight rows, associated with them. That is true, depending on what “large” means.

In December 1933 the Tennessee Valley Authority (TVA) convened a conference in Knoxville, TN with several university representatives and other governmental agencies for the purpose of planning a survey of Native American sites that were to be inundated after the Norris Dam was completed.

The dam on the Clinch River was to be the first hydroelectric dam for the TVA. By August 1933 the survey project was planned and the survey and large excavations were conducted by the Civil Works Administration and later through Federal Emergency Relief Administration funds. The project was done by late 1934. The TVA’s supervising archaeologist was William S. Webb. Webb was then the Chairman of the University of Kentucky’s Department of Anthropology and Archaeology and also the Chairman of the university’s Physics Department. All of the actual excavation work was carried out primarily by students who were guided by a host of supervisors.

The project identified 23 sites in the area that soon became the bottom of a series of lakes created by the dam. There were 29 mounds at the sites: 20 earth mounds, 9 stone mounds, and several village areas. Twelve of the mounds were found to be burial mounds and 17 had prehistoric structures associated with them. A total of 54 wooden structures were identified. The subsequent report on the project related that all of important sites were excavated and all of the artifacts and other archaeologically important materials were preserved. The full report was published by the Smithsonian as “Ethnology Bulletin 118” and was written by Webb. The report contains dozens of intriguing photos of the mounds, excavations, artifacts, and skeletal remains.

Oddly, a copper coin, button, and bead were found at a depth of 18 inches inside another structure under a smaller adjacent mound.

The coin was identified as a 1787 coin minted by New Jersey. Still another line of 10 standing stones was found at an adjacent structure uncovered at the same site. 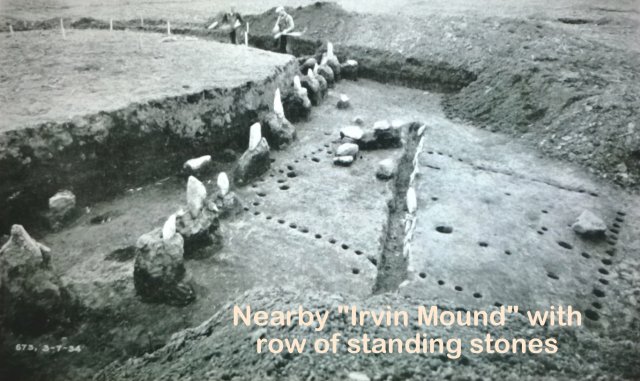 The photograph that so intrigued the British curator was of the Cox Mound located about 9 miles west of Clinton, TN.

It is Plate 108 in the Smithsonian Bulletin. When the Cox Mound was excavated, a series of structures was found to have been built progressively, one of top of another, forming an 8-foot high mound. A total of 49 burials were uncovered during the excavation of the mound.

The photograph (Plate 108 shown at the top of this article) shows the floor of the mound. The nearly square building (that had originally been constructed before the mound was formed over it) was 37.5 feet by 36.5 feet.

The outer walls were formed by upright red cedar posts about 14 inches in diameter embedded from 4 to 30 inches into the soil. This structure had a roof covered with sod. At some point the sod roof collapsed and another structure was built on top of it.

The second structure eventually collapsed and a third structure was erected on the top of the earlier two buildings. However, some of the cedar posts from the original building remained in place and they appear to have been incorporated into the later structures.

When the excavation was done in 1934, the excavators carefully dug around the remaining cedar posts leaving numerous irregularly shaped vertical “cylinders” which appear, at first glance, to be standing stones. Two of these posts were 72 and 82 inches tall, the tallest at the site. The remains of the cedar posts were treated with a liquid that hardened the rotted wood, and the dirt surrounding the cedar posts was later removed.

Inside the building the excavators found 72 limestone and sandstone blocks scattered around. Another pile of 200 “irregular rocks” was found in a different area of the building. These can be seen on the photo at the top of this page and were the only rocks found in this excavated structure.

While standing stones were found at other mounds, strangely, none of the features shown in the photo that so impressed Harris were actually standing stones.

Mystery Of The Lost Underground City Of The Grand Canyon

Mystery of Great Wall Of California: An Ancient Unsolved Enigma

All of the vertical features shown in this mound were the remains of excavated cedar posts. A careful review of the pottery and other artifacts found during the excavation are typical Native American objects characteristic of Mississippian villages active in that region in the 1200’s to historic times.

All of the sites that were excavated by the TVA project have now been underwater nearly 80 years.

Out of my own curiosity, all of the measurements of skeletal remains found during the TVA were examined in the Bulletin report.

Several hundred skeletal remains were found during the TVA’s excavations and measurements were made on every bone and skull found.

About 100 skeletons were sufficiently intact to make good measurements. The most consistent measurement of bones was the femur and as a guideline I used the usual estimation formula (2.32 x femur in cm + 65.53 cm). Using this formula, the tallest skeleton found would have been just under 5 feet 10 inches in height. The average size of male skeletons was about 5’ 6”.

In 1950 Webb was involved in the excavation of the Dover Mound in Kentucky. A total of 55 burials were found in the mound, but in a log-lined tomb at the base of the mound, a skeleton 7-feet tall was found. I have no reason to suspect that Webb underreported the size of the skeletons.

About the author - Dr. Greg Little - is author or co-author of nearly 50 books and over a thousand articles. He is part Seneca and is author of The Archetype Experience, People of the Web, and Grand Illusions as well as several other books on ancient history. He has also published numerous articles on America's mound builder culture and specific mound sites. He has been featured in documentaries on The History Channel, Discovery, The Learning Channel, National Geographic Channel, MSNBC, and SciFi.
For more information visit AP Magazine