Ellen Lloyd - AncientPages.com - If you think going to a dentist is an awful thing, be thankful you didn’t live thousands of years ago. Our ancestors understood the importance of healthy teeth, but the methods and instruments used in those days were far from pleasant.

Historical evidence proves that dentistry started around the areas of China, Egypt, India, Etruscans of Central Italy, Assyrians, and Japan. While exploring and researching mummies, archaeologists have learned much about ancient dentistry.

There is a lot of historical evidence revealing that ancient Egyptians practiced medicine thousands of years ago.

The Edwin Smith Papyrus is an ancient Egyptian medical text, named after the dealer who bought it in 1862, and the oldest known surgical treatise on trauma. The papyrus was written sometime before 3000 B.C. and it gives instructions on how to heal and treat wounds in the mouth.

Although there were detailed instructions about curing mouth problems, people still believed the teeth problems were untreatable. To begin with, minor dental work was performed, but later, doctors were able to carry out more advanced procedures. 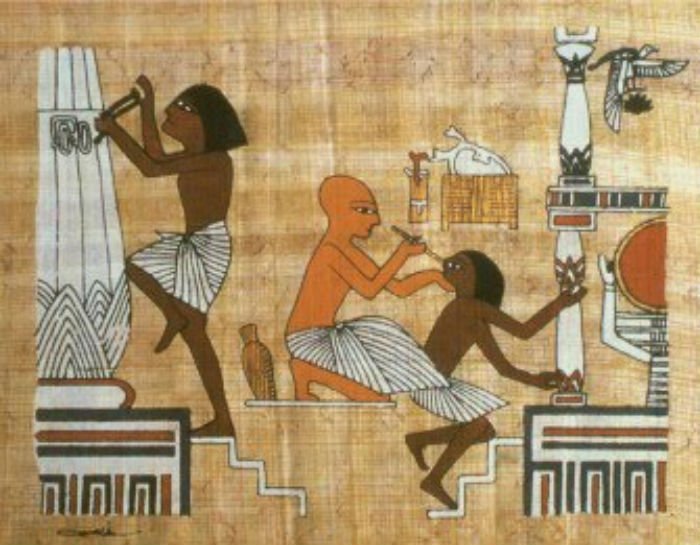 The ancients doctors were familiar with almost all modern dental diseases.

The earliest signs of dental surgery were between 3000 and 2500 B.C. and usually involved drilling out cavities or pulling teeth. It might be hard to imagine having your teeth drilled into without the comfort of shots and happy gas, but Egyptians by 1550 B.C had prescriptions for dental pain and injuries. Interestingly, through all these years, there has never been any evidence in mummies or writings that mechanical or false teeth were ever used. This has been somewhat of a surprise to scientists as we would expect ancient Egyptians who were rather lavish to replace missing front teeth with artificial teeth.

Nevertheless, ancient Egyptians have also been credited with the invention of toothpaste. The world’s oldest-known recipe for toothpaste comes from ancient Egypt in fact. When discovered, the Egyptian toothpaste formula from the 4th century AD caused a sensation among dentists who described it as an advanced recipe “ahead of its time”.

Egyptians are believed to have started using a paste to clean their teeth around 5000BC before toothbrushes were invented. Ancient Greeks and Romans are known to have used toothpaste, and people in China and India first used toothpaste around 500BC.

The Etruscans were a group of agricultural people who evolved into an urban population of craftsmen, traders, and navigators who lived in a network of cities and dominated the area of the Mediterranean around Italy in the 8th and 9th centuries BC. The origins of the Etruscans are lost in prehistory, but the main hypotheses are that they are indigenous, probably stemming from the Villanovan culture, or that they are the result of invasion from the north or the Near East.

The Etruscan people were very intelligent and always strived to increase their knowledge in a number of areas, such as for example medicine and dentistry. The courage to travel across the sea to trade with other civilizations is proof of their industrious and courageous personalities. Archaeological discoveries reveal that their image was important to them and they were the first people were to take basic work in the mouth to a more artistic level. Using the knowledge of dentistry they learned from travel, they began to experiment with filling gold teeth.

In one preserved mouth, gold bands were wrapped around the teeth and cemented by soldering with heat. Human and animal teeth were used as artificial teeth and held in place by gold bands. Performed around 700 B.C this is the first time in history a form of prosthetics was ever used in the mouth and would be the only use for many years.

The Etruscan prostheses were remarkable because they used gold bands which were soldered into rings instead of the gold wires which are seen in other cultures (Egyptians, Phoenicians) of the same time.

Some years ago, a mummy was found with many devastating dental problems. Around 2,100 years ago, at a time when Egypt was ruled by a dynasty of Greek kings, a young wealthy man from Thebes was nearing the end of his life. Rather than age, he may have died from a basic sinus infection caused by a life of painful cavities. The man, whose name is unknown, was in his 20s or early 30s. A modern-day dentist would have a hard time dealing with the young man's severe condition and one can imagine that the ancient dentist must have felt overwhelmed. 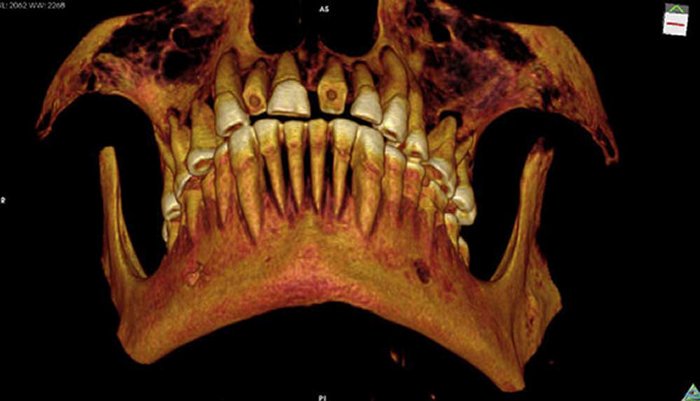 A 3D reconstruction of the 2,100-year-old mummy's teeth. They were in horrible shape with "numerous" abscesses and cavities, problems that may have resulted in a sinus infection, possibly fatal. Image credit: International Journal of Paleopathology.

Greek dentists struggled to stop and cure his cavities. Linen soaked in medicine was packed in the holes in his teeth in an attempt to relieve the pain. Cloth in the tooth prevented food from entering and festering in the area. Greeks prided themselves in their strength and ability to handle pain. So, when cavities were found in the teeth, Greeks would often deal with the pain rather than have the tooth pulled. Losing a tooth would be a great loss and the pain was a small price to pay, but in the end, the ancient dentists failed and the man died.

When the unknown men died he was mummified, his brain and many of his organs taken out, resin put in and his body wrapped. Curiously, embalmers left his heart inside the body, a sign perhaps of his elite status.

The history of dentistry in China is closely aligned with the remarkable developments in Chinese medicine over at least six millennia.

Rudimentary dental extractions were performed as early as 6000 BC when the first signs of adornment with human teeth were described. Around 2700 BC ancient Chinese started using used acupuncture to treat pain associated with tooth decay. Doctors in ancient China treated toothaches with arsenic about A.D. 1000. They are also noted for their development of using silver amalgam for filling teeth. The Chinese were particularly advanced in their observation of the oral cavity.

In an ancient work called the Canon of Medicine, dentistry is discussed. A section of this work is dedicated specifically to mastication and deglutition. The Chinese were also interested in systemic diseases and their connection to oral manifestations. For example, they recognized that prior to the development of measles, white spots would appear in a person’s oral cavity.  Another significant area of study among Chinese surgeons in Chinese history of dentistry was oral surgery.

Scientists have discovered many writings regarding the extraction of teeth and the instruments utilized to perform such tasks. 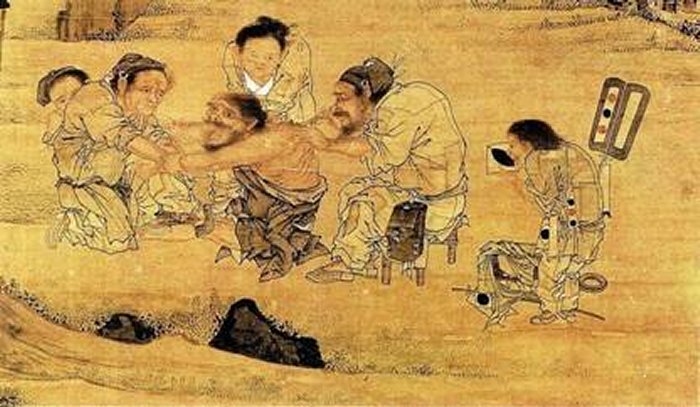 The great Sung landscapist Li T’ang depicts a country doctor cauterizing a patient’s arm by burning it with the powdered leaves of an aromatic plant. The treatment is called Moxibustion that is widely used along with acupuncture for treatment such as relieving toothache.

In addition, information has been found in the Chinese history of dentistry relating to the abscesses of teeth and other oral structures. The Chinese based many treatments for abscesses on scientific observation. Finally, the Chinese surgeons delved extensively into surgery techniques of the oral cavity..

There were actually four distinct periods of medical development in China: the Mystical Period; the Golden Period; the Controversial Period; and the Transitional Period. The Golden Period was marked by the appearance of the first textbooks to describe preventive and restorative dental techniques, as well as the first colleges. Dentistry then moved through the dark times of the Controversial Period, when war mongering stymied progress. Lasting until 1800 AD, it came to an end with the domination of Western medicine and dentistry.

In Mesopotamia, Diseases Were Often Blamed On Pre-Existing Spirits And Gods

Before the advent of the current medical establishment, many ancient cultures had believed that worms were the cause of various illnesses and diseases such as tooth decay known as cavities today. In fact, tooth worms have a long history, first appearing in a Sumerian text around 5,000 BC.

References to tooth worms can be found in China, Egypt, and India long before the belief finally takes root (pun intended) into Western Europe in the 8th century.

For example, the Chinese believed there were worms in the teeth that caused tooth decay and pain. They had several remedies that they employed successfully to kill these worms.

The ancient Babylonians had also believed that worms in the form of demons had caused diseases in people. 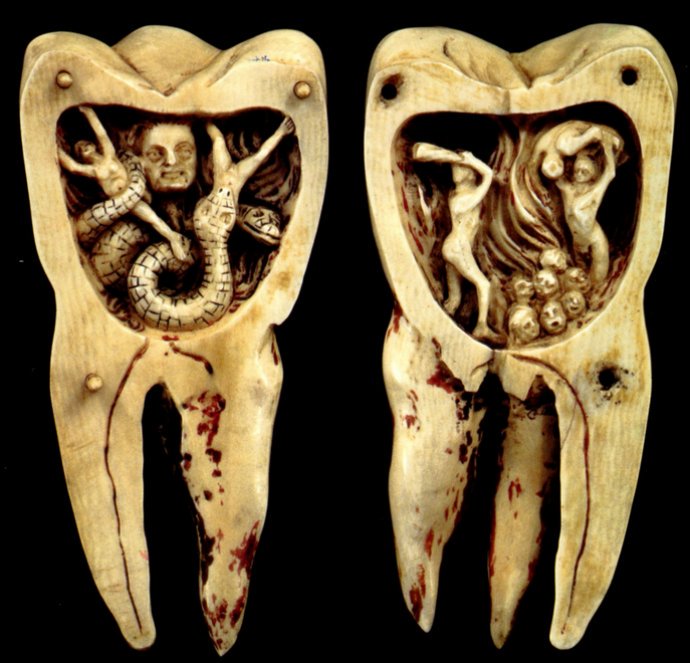 In Mesopotamia, diseases were blamed on pre-existing spirits and gods. Each spirit was held responsible for only one of what we would call a disease in any one part of the body. So usually "Hand of God X" of the stomach corresponds to what we call a disease of the stomach. A number of diseases simply were identified by names, "bennu" for example.
Clay tablets contained more than 100,000 cuneiform scripts belonging to the Sumerians, Babylonians, and Assyrians who lived in Mesopotamia were collected. In 700 BC, Asurbanipal, the Assyrian king, collected these scripts in a library of the city of Nineveh. Among these tablets, there were some parts of the toothache. The laws of King Hammurabi, which had been responsible for the lack of surgical development, brought social and legal responsibilities to doctors for the first time.

In Mesopotamia gods and spirits were blamed for diseases.

By examining the surviving medical tablets it is clear that there were two distinct types of professional medical practitioners in ancient Mesopotamia who also treated toothaches. 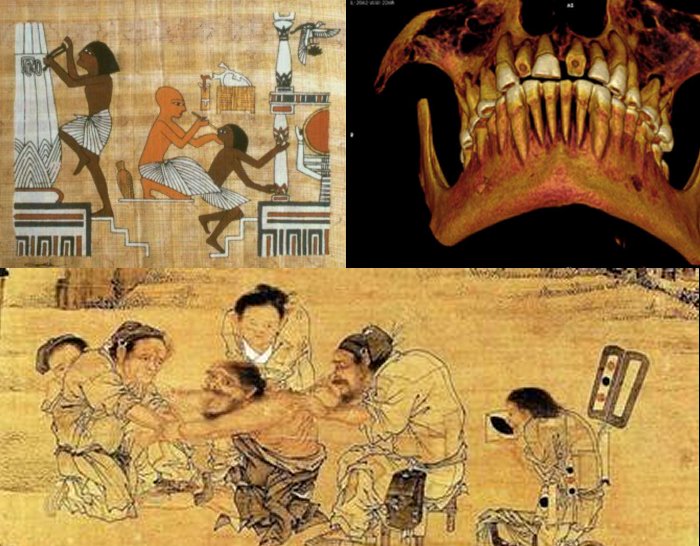 The first type of practitioner was the ashipu, in older accounts of Mesopotamian medicine often called a "sorcerer." One of the most important roles of the ashipu was to diagnose the ailment. In the case of internal diseases, this most often meant that the ashipu determined which god or demon was causing the illness. The ashipu could also attempt to cure the patient by means of charms and spells that were designed to entice away or drive out the spirit causing the disease. The ashipu could also refer the patient to a different type of healer called an asu. He was a specialist in herbal remedies, and in older treatments of Mesopotamian medicine was frequently called "physician" because he dealt in what were often classifiable as empirical applications of medication.

Dentistry has evolved over time from a rather barbaric practice to technologically advanced industry. Preventative maintenance such as teeth cleaning helps people avoid some of the serious problems that people of the past were faced with when it came to teeth.

Loevy HT, Kowitz AA. – The dawn of dentistry: dentistry among the Etruscans