A. Sutherland - AncientPages.com - Fenrir (the Wolf) is the oldest of three terrible children of Loki, according to the literary works Poetic Edda (the Icelandic medieval manuscript known as the Codex Regius) and Snorri Sturluson's Prose Edda, and Heimskringla. 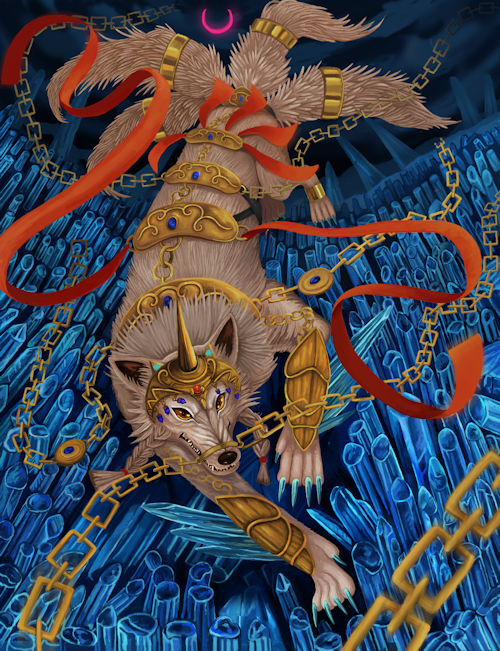 Fenrir is a huge, powerful, and terrifying creature in Norse mythology. His upper jaw touches heaven when yawning, and his lower jaw drags along the earth—fire coming from his nostrils and eyes.

Fenrir has two siblings; his sister Hel, ruler of Niflheim, the land of the dead, and his younger brother, the Midgard Serpent. All three are the offspring of Loki, representing the forces of evil in Norse myths. At first, they live with their father god Loki and their mother, the giantess Angrboda in Jotunheim, which belongs to the frost giants and rock giants.

God Odin Knows Fenrir Is Dangerous, But Killing Is Forbidden In Asgard

From the beginning, the mighty god Odin knows that Loki's children are dangerous, so he must always keep an eye on them. Every evening, his two trusted ravens, Huginn and Muninn, return to Odin's shoulders, and during dinner in Valhalla, they whisper all they have heard in his ears. Thus, Odin knows all the news about Loki's monsters growing up in Jotunheim.

But he cannot accept they live totally outside of his control because they are dangerous. The gods want to put all three of them to death. It is considered the best way to get rid of them.

None of the gods wants to poison the sacred realm of Asgard with Loki's malicious offspring. However, killing is forbidden in Asgard. Therefore, they can only chain the creature.

Fenrir becomes a monster; he is now so large and aggressive that only the war god, Tyr is brave enough to feed him. The gods want to keep an eye on him. They are afraid that he can threaten them one day when he grows up.

After some time, the gods decide to bind Fenrir with a unique chain of iron links, the Læding, but Fenrir breaks the bonds easily and does the same with another, much stronger rope called Dromi. 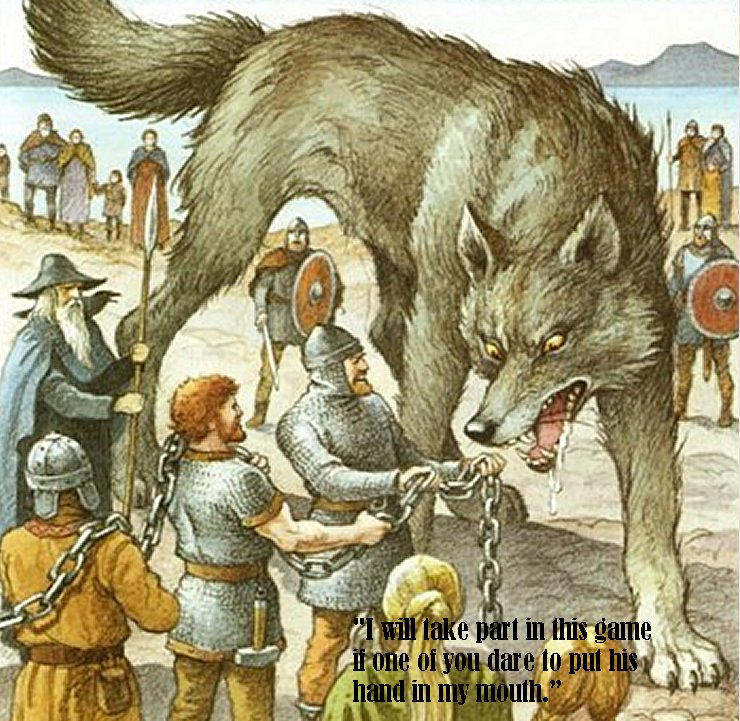 Odin makes his decision. Hel becomes the ruler of Niflheim until the end of everything, the Ragnarok. Jormungand is thrown into the ocean, and the third of them, Fenrir, perhaps the most dangerous of the children, is taken to Asgard.

Fenrir is confident of his enormous strength, and it appears that nothing can restrain him, but the gods still have one and probably the last possibility to gain control over the creature. They convince the dwarfs to prepare unbreakable bonds.

Odin sent Frey's servant Skirnir out to Svartalfheim, the land of the dwarfs. Just in time, the dwarfs delivered a magic cord called Gleipnir, composed of the strongest and extremely rare unbreakable materials, including the sound of a cat walking, the roots of the mountains, the beard of a woman, the sinew of a bear, the breath of a fish, and the saliva of a bird.

The rope Gleipnir is soft, smooth, light, silky as a ribbon, and surprisingly strong. According to Snorri Sturluson's "Prose Edda" book "Gylfaginning," Odin and some other gods invite Fenrir to the island of Lyngvi, located in the middle of Lake Amsvartnir (probably a fictional place invented by Snorri, himself).

Fenrir is not only a terrible and dangerous monster but also very cunning. Appealing once again to Wolf's vanity that he is invincible, they show him the rope. He looks carefully at the string and momentarily sensing the gods' deception, he says:

"I do not think I will gain much of a reputation by breaking such a thin ribbon, and if this band is made by magical art then, thin as it is, it is not going around my legs."

"And if I cannot free myself I will have to wait a very long time before you free me…!

"But don't think I am a coward, therefore, I will take part in this game if one of you dare to put his hand in my mouth."

None of gods dare to do it because it is hazardous. Finally, the brave god Tyr is ready to put his right hand into Fenrir's mouth.

The monster Fenrir is to free himself later when Ragnarok comes. He will join his father, Loki, brother Jormungand, the Midgard Serpent, his sister Hel, and all the giants.

In Ragnarok, Fenrir kills Odin by swallowing him, but he has to pay for it. Odin's son Vidar will avenge his father and kill the monster wolf – Fenrir.