AncientPages.com - Scientists once could reconstruct humanity’s distant past only from the mute testimony of ancient settlements, bones, and artifacts.

Today there is a new powerful approach in form of genetic analysis that enables scientists to read the actual genetic code of our ancient ancestors. It gives insight into the movement of people and cultures across the ancient world. 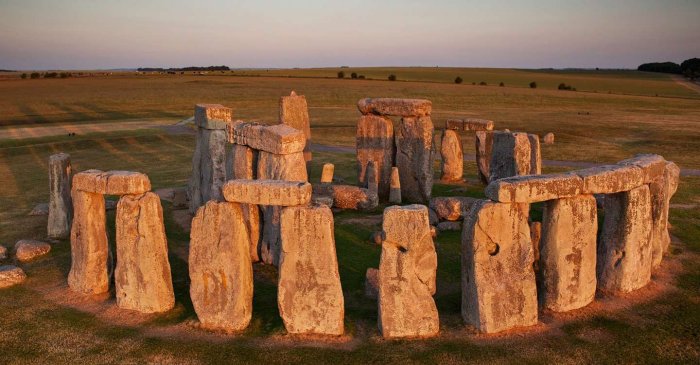 “There was a view that migration is a very rare process in human evolution,” lead author David Reich, a Howard Hughes Medical Institute investigator at Harvard Medical School explains.

"Not so, says the ancient DNA. Actually, Reich says, “the orthodoxy – the assumption that present-day people are directly descended from the people who always lived in that same area – is wrong almost everywhere.”

In one of the new papers, Reich and a cast of dozens of collaborators chart the spread of an ancient culture known by its stylized bell-shaped pots, the so-called Bell Beaker phenomenon. This culture first spread between Iberia and central Europe beginning about 4,700 years ago. By analyzing DNA from several hundred samples of human bones, Reich’s team shows that only the ideas – not the people who originated them – made the move initially. That’s because the genes of the Iberian population remain distinct from those of the central Europeans who adopted the characteristic pots and other artifacts.

But the story changes when the Bell Beaker culture expanded to Britain after 4,500 years ago. Then, it was brought by migrants who almost completely supplanted the island’s existing inhabitants – the mysterious people who had built Stonehenge – within a few hundred years. “There was a sudden change in the population of Britain,” says Reich. “It was an almost complete replacement.”

For archeologists, these and other findings from the study of ancient DNA are “absolutely sort of mind-blowing,” says study coauthor Barry Cunliffe, an archaeologist and professor emeritus at the University of Oxford. “They are going to upset people, but that is part of the excitement of it.”

Vast Migration from the Steppe

Consider the unexpected movement of people who originally lived on the steppes of Central Asia, north of the Black and Caspian seas. 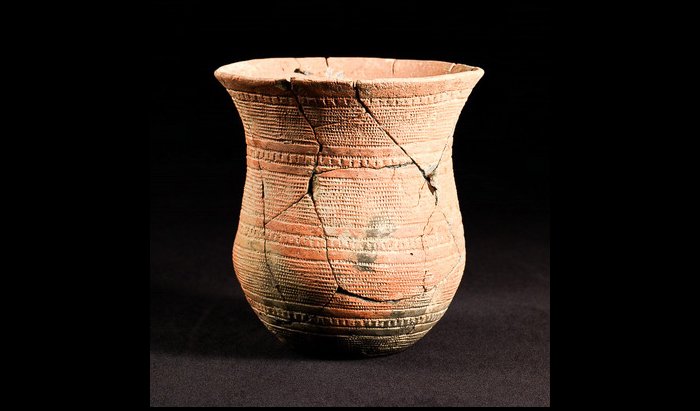 The use of stylized bell-shaped pots like this one from Sierentz, France spread across Europe beginning about 4,700 years ago. DNA analysis show that this so-called Bell Beaker culture was brought to Britain by people who largely replaced the island’s existing inhabitants. Credit: Anthony Denaire

About 5,300 years ago, the local hunter-gatherer cultures were replaced in many places by nomadic herders, dubbed the Yamnaya, who were able to expand rapidly by exploiting horses and the new invention of the cart, and who left behind big, rich burial sites.

Archeologists have long known that some of the technologies used by the Yamnaya later spread to Europe. But the startling revelation from the ancient DNA was that the people moved, too – all the way to the Atlantic coast of Europe in the west to Mongolia in the east and India in the south. This vast migration helps explain the spread of Indo-European languages. And it significantly replaced the local hunter-gatherer genes across Europe with the indelible stamp of steppe DNA, as happened in Britain with the migration of the Bell Beaker people to the island.

“This whole phenomenon of the steppe expansion is an amazing example of what ancient DNA can show,” says Reich. And, adds Cunliffe, “no one, not even archeologists in their wildest dreams, had expected such a high steppe genetic content in the populations of northern Europe in the third millennium B.C.”

This ancient DNA finding also explains the “strange result” of a genetic connection that had been hinted at in the genomes of modern-day Europeans and Native Americans, adds Chicago’s Novembre. The link is evidence from people who lived in Siberia 24,000 years ago, whose telltale DNA is found both in Native Americans, and in the Yamnaya steppe populations and their European descendants.

Reich’s and colleagues' second new Nature paper, on the genomic history of southeastern Europe, reveals an additional migration as farming spread across Europe, based on data from 255 individuals who lived between 14,000 and 2,500 years ago. It also adds a fascinating new nugget – the first compelling evidence that the genetic mixing of populations in Europe was biased toward one sex. 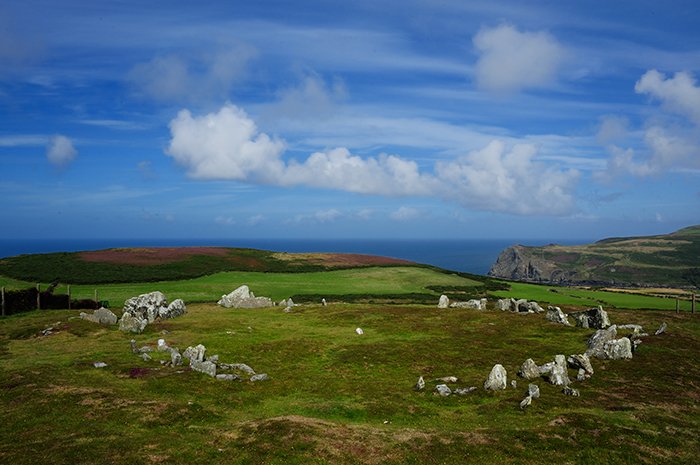 The people who built Stonehenge and other stone monuments largely vanished within a few hundred years after the arrival of the Bell Beaker culture in Britain (the burial monument known as Meayll Hill, on the Isle of Man, shown above). Credit: Adam Stanford © Aerial-Cam Ltd.

Hunter-gatherer genes remaining in northern Europeans after the influx of migrating farmers came more from males than females, Reich’s team found. “Archaeological evidence shows that when farmers first spread into northern Europe, they stopped at a latitude where their crops didn’t grow well,” he says. “As a result, there were persistent boundaries between the farmers and the hunter-gatherers for a couple of thousand years.” This gave the hunter-gatherers and farmers a long time to interact. According to Reich, one speculative scenario is that during this long, drawn-out interaction, there was a social or power dynamic in which farmer women tended to be integrated into hunter-gatherer communities.

So far that’s only a guess, but the fact that ancient DNA provides clues about the different social roles and fates of men and women in ancient society “is another way, I think, that these data are so extraordinary,” says Reich.

These scientific leaps forward have been fueled by three key developments. One is the dramatic cost reduction (and speed increase) in gene sequencing made possible by advanced machines from Illumina and other companies. The second is a discovery spearheaded by Ron Pinhasi, an archaeologist at University College Dublin. His group showed that the petrous bone, containing the tiny inner ear, harbors 100 times more DNA than other ancient human remains, offering a huge increase in the amount of genetic material available for analysis.

The third is a method implemented by Reich for reading the genetic codes of 1.2 million carefully chosen variable parts of DNA (known as single nucleotide polymorphisms), rather than having to sequence entire genomes. That speeds the analysis and reduces its cost even further. 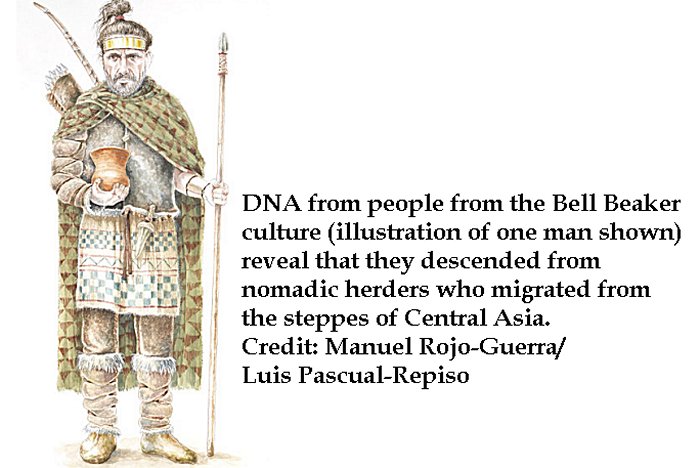 The new field made a splash when Svante Pääbo of the Max Planck Institute for Evolutionary Anthropology, working with Reich and many other colleagues, used ancient DNA to prove that Neanderthals and humans interbred. Since then, the number of ancient humans whose DNA Reich has analyzed has risen exponentially. His lab has generated about three-quarters of the world’s published data and, including unpublished data, has now reached 3,700 genomes. “Every time we jump an order of magnitude in the number of individuals, we can answer questions that we couldn’t even have asked before,” says Reich.

Now, with hundreds of thousands of ancient skeletons (and their petrous bones) still to be analyzed, the field of ancient DNA is poised to both pin down current questions and tackle new ones. For example, Reich’s team is working with Cunliffe and others to study more than 1,000 samples from Britain to more accurately measure the replacement of the island’s existing gene pool by the steppe-related DNA from the Bell Beaker people. “The evidence we have for a 90 percent replacement is very, very suggestive, but we need to test it a bit more to see how much of the pre-Beaker population really survived,” explains Cunliffe.

Beyond that, ancient DNA offers the promise of studying not only the movements of our distant ancestors, but also the evolution of traits and susceptibilities to diseases. “This is a new scientific instrument that, like the microscope when it was invented in the seventeenth century, makes it possible to study aspects of biology that simply were not possible to examine before,” explains Reich. In one example, scientists at the University of Copenhagen found DNA from plague in the steppe populations. If the groups that migrated to Britain after 4,500 years ago brought the disease with them, that could help explain why the existing population shrank so quickly.

With the possibility of many such discoveries still ahead, “it is a very exciting time,” says Cunliffe. “Ancient DNA is going to revitalize archaeology in a way that few of us could have guessed even ten years ago.”

Two papers published in the journal Nature on February 21, 2018.