AncientPages.com - Legio Martia means 'Legion of Mars' (sacred to Mars) was the name of a legion of Roman infantry. The soldiers were widely respected for their extraordinary bravery, which inspired to give them the name the 'Martian legion or the Martians – ‘warlike’.

This Roman military unit was formed by Gaius Julius Caesar in 48-49 BC, as described by Appiano in his "Civil War". It was made up of about 22,000 men, divided into eight legions. It was enlisted among the Italic citizens to fight against Gneo Pompeo Magno, took part in the subsequent battle of Pharsalus, after which it obtained the honorary appellation of Martia, which is worthy of Mars, God of war.

The unit fought again for Caesar in the Battle of Tapso, then passed to Marcus Antonius first and then to Octavian later.

Other historical sources associate the Legio Martia with one of the various legions coming from the Italic area of ​​the ancient Martia, today's Marsica from which it took its name, and the honors were attributed to it following the victories reported in the various battlefields, from Gaul to 'Africa.

Ancient records say that the legionaries who had followed Caesar in the long campaign of Gaul, whom he had been able to guide, support, defend with such intelligence and respect that men would have fought for him to the death. The veterans of the Gauls were the best you could wish for in battle, brave, faithful, trained, and effective as well as fast and diligent executors, but never rebels. 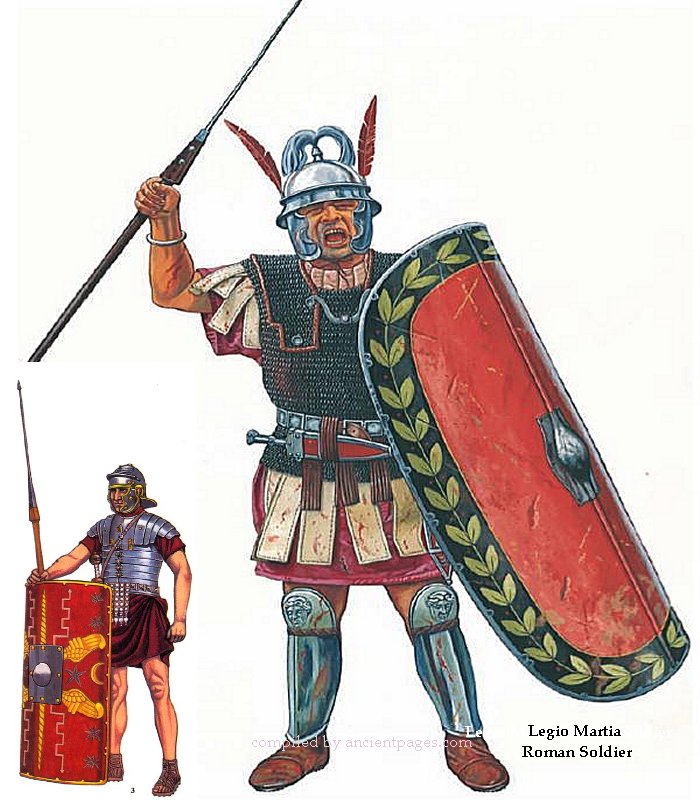 The Martians are mentioned in many ancient historical sources, such as for example, Cicero’s work known as ‘Philippics’ I.8). Cicero mentions them as an important part of Octavian's army. The Martians of Legio Martia represented one of six legions stationed in Macedonia for Caesar's planned Parthian expedition.

Appian of Alexandria (95 AD – 165 AD), a Greek historian with Roman citizenship who flourished during the reigns of such personalities as Emperors of Rome Trajan, Hadrian, and Antoninus Pius, describes the Martians and the role they played as the vanguard of Octavian's force in the civil wars.

He also describes the final fate of the Legion Martia, which took place on the same day as the Battle of Philippi (42 BC) - the final battle in the Wars of the Second Triumvirate.

The Martians were crossing the Adriatic Sea in transport vessels when they were met by 130 enemy warships.

In his 'Civil Wars', Appian says:

‘The men who were exposed to this danger performed many deeds of valor.

Sometimes they hastily warped their ships together with ropes and made them fast with spars to prevent the enemy from breaking through their line.

But when they succeeded in doing this (the enemy) discharged burning arrows at them. Then they cast off their fastenings as quickly as possible and separated from each other on account of the fire and thus again were exposed to being surrounded or rammed by the triremes…’

Some of the soldiers, and especially the Martians, who excelled in bravery, were exasperated that they should lose their lives uselessly, and so killed themselves rather than be burned to death; others leaped on board the triremes of the enemy, selling their lives dearly. (Appian, Civil Wars IV 115-116).