AncientPages.com - Inti Raymi is Inca’s Sun Festival traditionally celebrated  at Cuzco on June 24, which marks the winter solstice, the shortest day of the year - the Inca New Year (in regions south of the equator the Gregorian months, June and July are winter months.) 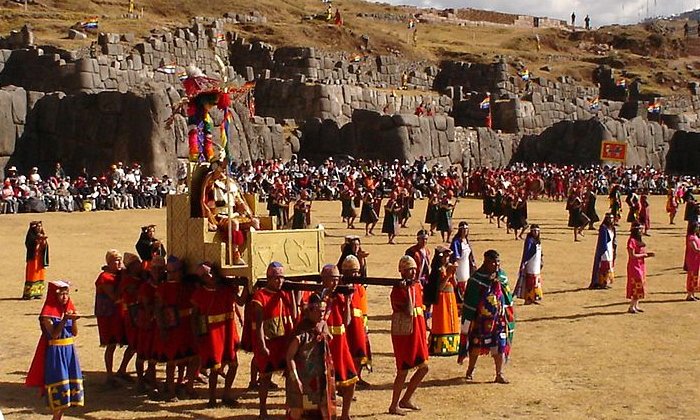 It is an ancient Inca religious celebration of "The Inti or Sun". Formerly the Inti Raymi lasted about 15 days, and the last Inti Raymi - carried out with the presence of the Inca Emperor - was in the year 1535; one year before ¨The Spanish Conquest¨ in 1536.

Today, it is a theatrical representation. Thousands of Cuzco and people from all over the world come together to this event, which is one of the most important cultural and traditional manifestations in this part of the world.

According to this ancient tradition, Inca honors the beginning of the new solar year, a time when the Sun makes its come back to provide warmth for all life. It is the rebirth of the Sun, the Inca royalty, and the mythical origin of the Inca people.

During the Inca Empire, only Inca males were allowed to participate in the festival, during which offerings were made to the Sun, god Viracocha and the thunder god. The participants made a large number of wooden statues dressed in fine clothes; at the end of the festival, the statues were burned.

The rituals associated with Inti Raymi are still performed and take place in front of huge crowds on this particular day each June at Cuzco, Peru.

The ancient fortress-ruins of Sacsayhuaman, in the hills overlooking the city, are filled that day with a very special atmosphere of Andean music, dance, a simulation of animal sacrifice (which originally served as an offering to the Sun God), parades, and ceremonies in the ancient Quechua tongue.

The lead figure is "The Inca" - the Emperor, supreme ruler of the Incan Empire. Carried on a platform and dressed in regal red and gold, the Emperor leads the ceremony with gestures and incantations to the Sun. During the festival, 500 actors representing Inca nobility are dressed in traditional clothes adorned with silver and gold. One actor portraying the Sapa Inca gives his blessings to the ceremony and makes a speech in the native language Quechua, to honor the Sun.

According to Spanish chronicler, soldier and poet, Garcilaso de la Vega, the festival Inti Raymi was created by the ninth Sapa Inca Pachacuti in 1412 and lasted for nine days.

The last Inti Raymi with the Inca Emperor's presence was carried out in 1535, after which the Spanish and the Catholic priests banned it, for many years at least.

Little is known about the details of the Inti Raymi celebration, and most of what we see today is pieced together from archaeological findings, and of memories and practices that have been passed on from one generation to another to keep the ancient traditions alive.

As Quechua is not a written language, there are no written records of how the rituals were originally performed. Among South American greatest celebrations, Inti Raymi is the second only to the festival in Rio de Janeiro.

The Only Peru Guide