A. Sutherland - AncientPages.com - Ereshkigal, a granddaughter of Enlil, is the queen of the underworld or Irkalla ( the land of the dead). She is older sister of Inanna (later known as Ishtar) and wife of Nergal, the king of death who brings disease, plague, and all misfortunes caused by heat.

Ereshkigal, whose name means "Queen of the Great Below", is very powerful ruler in her kingdom of the dead and her judgment and laws are always indisputable.

Ereshkigal Was Given The Underworld For Her Domain

In Sumerian religion, in the very beginning, the universe was divided into three regions each of which became the domain of a god. Anu, Sky Father, was also "King of the Gods", "Lord of the Constellations, Spirits and Demons", and "Supreme Ruler of the Kingdom of Heaven", which was his domain. The earth was given to Enlil. Ea became the ruler of the waters. 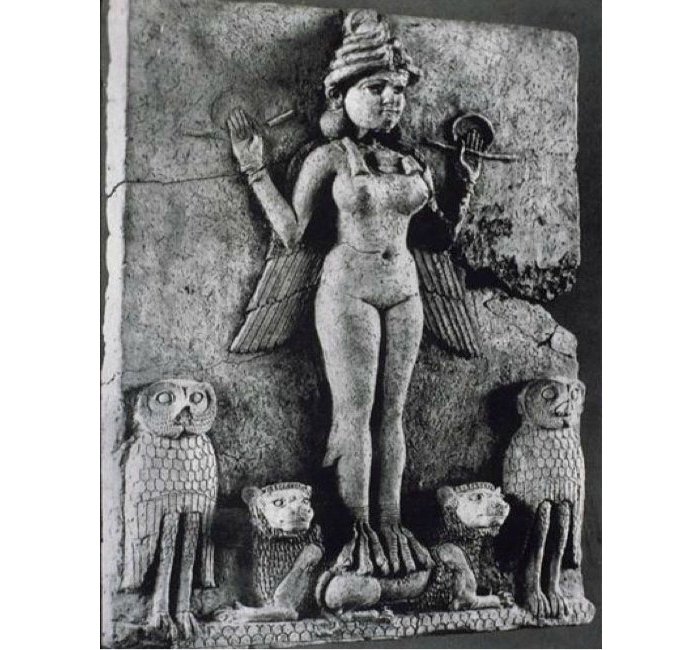 Together they constituted the triad of the Great Gods.

According to the Epic of Gilgamesh (c.1850 BC), Ereshkigal was “given the underworld for her domain” and she became the ruler of the Underworld.

However, in another story (similar to that of Ovid’s tale of Hades’ and abduction of the goddess Persephone), Ereshkigal is kidnapped by her half-brother, the dragon Kur, and taken to the underworld where she is made queen.

Inanna Descends To Gloomy Kingdom Of The Dead

No one could ever question her decisions and those who enter her world can no longer return to the world of the living.

The Kingdom of Ereshkigal is a gloomy land of shadows, with no future and no hope. To this abyss of hopelessness are thrown not only sinners but also good and bad, great and small, God-fearing people and blasphemers. All of them become powerless and pale forever.

The exception is Inanna, the goddess of life and fertility, whose descent to Ereshkigal’s underworld is believed to be one of the most known Sumerian myths. Inanna and Ereshkigal have never been good friends. Moreover, Inanna enters the underworld in an unsuccessful attempt to deceitfully take power over the abyss of Ereshkigal.

Descent of Inanna to the Underworld and the ancient Sumerian Goddess of the Great Below, Ereshkigal

She is punished by her and killed and her corpse hangs on a hook.  It seems that even gods who try to convince Ereshkigal to release Inanna, are powerless to help, because in the underworld, there are rules and principles, which have to be followed.

Finally Ereshkigal gives Inanna’s corpse to the gods, and they revive the goddess with water of life and food. Inanna ascends to the upper world, but must send someone down to take her place in the land of the dead.

She decides to send her husband, Dumuzi as the substitution because Dumuzi is the one who has not mourned her death.

Appearance of Ereshkigal is not exactly known.

The Akkadians associated her with  their own Semitic underworld goddess, Allatum. There is, however, a rectangular, fired clay relief panel depicting a naked woman standing on two lions and flanked by owls, holding a rod and ring in her hands.

These two symbols are often depicted on Mesopotamian stelas, cylinder seals and reliefs.

Whether this panel depicts Inanna or Ereshkigal is still under debate. It has even been proposed that it may represent female demon Lilith.

With few exceptions, Ereshkigal had no cult center in Mesopotamia and as a result, she is only occasionally encountered outside the literature. Inscriptions confirm that temples dedicated to her existed in Kutha, Assur  and Umma.

Her coalition government with Nergal begins in the old-Babylonian period (1830 - 1531 BC). During the first millennium BC, Nebuchadnezzar II - a Chaldean king of the Neo-Babylonian Empire, who reigned c. 605 BCE – c. 562 BC - rebuilt her temple in Kutha (Cuthah).