AncientPages.com - On February 16, 1923, Howard Carter (1873 - 1939), an English archaeologist and Egyptologist unsealed and opened the burial chamber of the 14th century pharaoh King Tutankhamun in the tomb (KV62) in the Valley of Kings near Cairo in Egypt.

The discovery of the intact tomb of Tutankhamen became one of the richest and most celebrated contributions to Egyptology.

At age 17, Carter joined the British-sponsored archaeological survey of Egypt. He made drawings (1893–99) of the sculptures and inscriptions at the temple of Queen Hatshepsut in ancient Thebes. 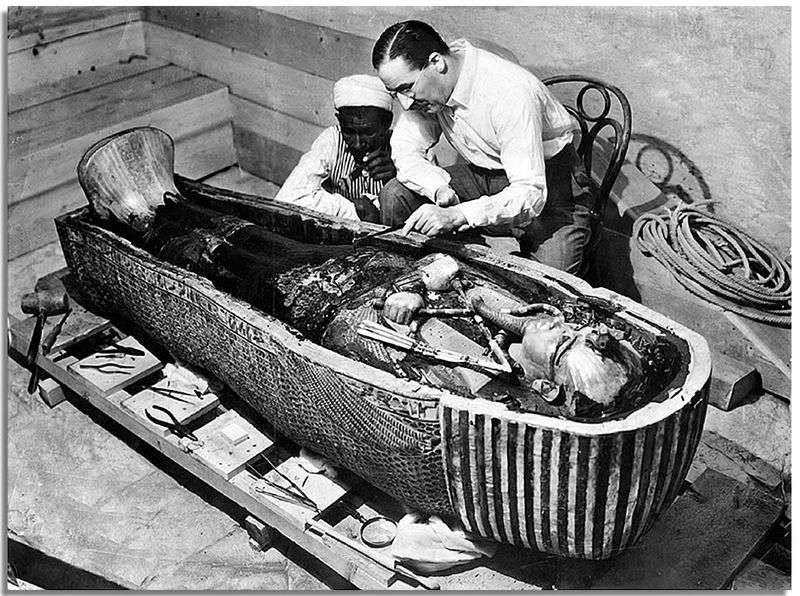 The discovery of the intact tomb of Tutankhamen was the foremost contribution to the study of Egyptology.

Carter worked for eight years with the British Survey, copying out inscriptions and hieroglyphs for translation by the erudite members of the group, and would have liked to have carried out his own excavations but promotion was denied to him on account of his lack of education. In 1899, Carter obtained a job with the Egyptian government’s Antiquities Department, supervising excavations in the Valley of the Kings, the most prolific excavation site in Egypt.

In 1902, he discovered the tombs of Hatshepsut and Thutmose IV; moreover, his research indicated the existence of a previously unknown pharaoh, Tutankhamun.

About 1907 he began his association with the 5th earl of Carnarvon, a distinguished collector of antiquities who had sought out Carter to supervise excavations in the valley.

On November 4, 1922, Carter found the first sign of what proved to be Tutankhamen’s tomb, and telegraphed Carnarvon to come at once, hoping that this was indeed the resting place of Tutankhamen and not daring to enter without his patron being present.

This is how the tomb of the boy king Tutankhamun appeared to archaeologist Howard Carter when he discovered it in 1922. Rosella Lorenzi/Semmel Concerts/news.discovery

When Carnarvon and his entourage eventually arrived, Carter made a breach in the doorway and, with the aid of a candle, saw a hoard of gold and ebony effects and two sentinel statues, guarding the entrance of what seemed to be a burial chamber.

While waiting for permission from the Egyptian authorities to open the burial chamber, Carter catalogued the contents of the antechamber. On 16th February 1923, Carter and Carnarvon, accompanied by Egyptian state officials, opened the sealed doorway and found the sarcophagus of Tutankhamen.

It has been suggested, from sources in Carter’s notes, that Carter and his patron had taken a sneak preview of the burial chamber, feeling that their investment of effort and money entitled them to take the honour of the first peek at the tomb.

It was sometime before one could see, the hot air escaping caused the candle to flicker, but as soon as one’s eyes became accustomed to the glimmer of light the interior of the chamber gradually loomed before one, with its strange and wonderful medley of extraordinary and beautiful objects heaped upon one another.

For the next 10 years Carter supervised the removal of its contents. He catalogued and recorded the entire collection, most of which are housed in the Egyptian Museum in Cairo.

Carter died in 1939 and is buried in Putney Vale Cemetery.