AncientPages.com - On June 21, 1547, a large fire engulfed the city of Moscow, almost destroying the Kremlin and the capital.

Rumors of witchcraft, riots and a new era of governance were all consequences of the fire that destroyed much of the city of Moscow on this terrible day.

These consequences were much serious challenge for Tsar Ivan IV than all casualties in this fire. 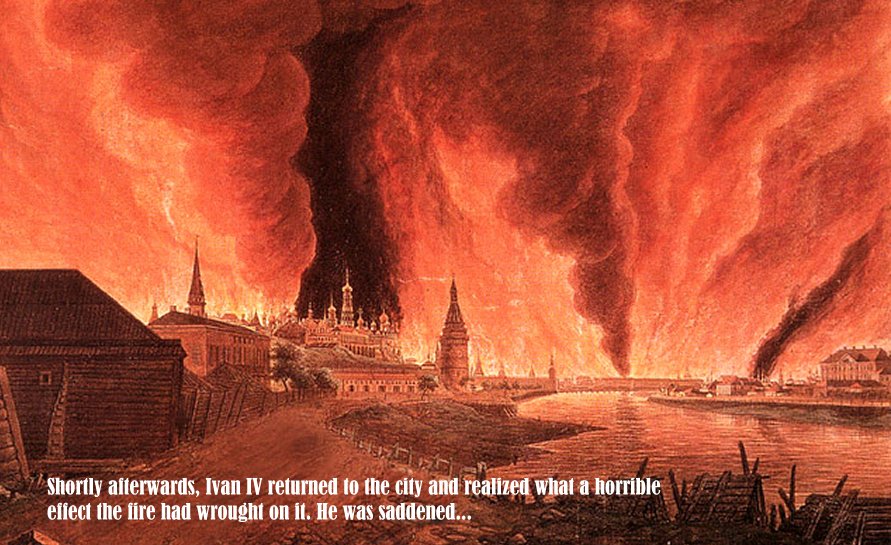 The year 1547 was particularly important in Russia’s history. Beginning in January, Ivan the Grand Prince of Moscow (later to become known as Tsar Ivan IV) at age 16 was crowned Tsar of all Russia. For much of his earlier life, Ivan IV was under the guardianship of noblemen, particularly the Glinsky’s family, which was still very powerful.

In a city that believed in anything occult, the fire created the perfect environment for various stories of sorcery.

Strange rumors spread among superstitious city-dwellers, who considered that the Glinsky family was responsible for setting the fire using witchcraft. According to popular mythology, Muscovites believed Anna Glinskaya (Ivan IV’s grandmother) “by sprinkling the houses and streets with water, in which human hearts had been soaked, set the city alight”.

The dogma spread panic in the city and fueled protests for the execution of Glinsky family members.

Furious crowds of people hurried to capture the tsar’s relatives. Yury Glinsky, Ivan’s IV’s uncle, fled from the crowd and found refuge in the Dormition Cathedral, but was dragged out and stoned to death in the square.

A few days later, a mass of city residents turned up at the palace in the village of Vorobyovo near Moscow, where Ivan IV had gone to escape the fire. They demanded the Tsar’s grandmother to be brought forward. The arrival of an armed crowd scared the young Tsar. 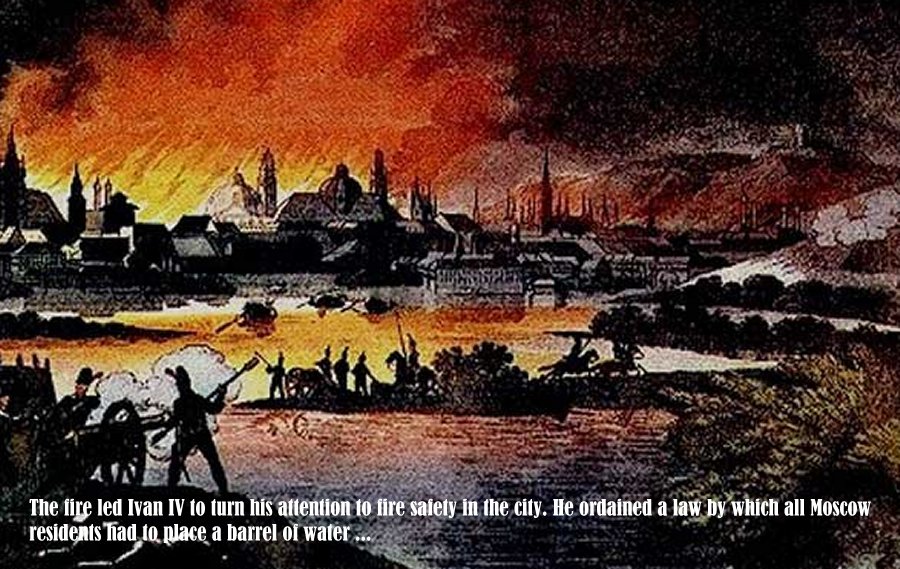 He later reflected on this event:

“fear ignited in my soul and shivered my bones”.

Ivan IV was able to convince Muscovites he was not hiding any of the Glinsky family members and the crowd left.

The memory of this incident remained with him all his life.

Shortly afterwards, Ivan IV returned to the city and realized what a horrible effect the fire had wrought on it. He was saddened by what he saw: the poverty created was devastating and left thousands possessing nothing more than the clothes they were wearing when escaping the flames.

The fearful scenes of a city burned down deeply affected him. Ivan realized that he could no longer leave the power in the hands of the nobles and assumed full responsibility for ruling his country.

The fire led Ivan IV to turn his attention to fire safety in the city. He ordained a law by which all Moscow residents had to place a barrel of water in their yard and on the roof of their houses. They were ordered to construct ovens and fireplaces in kitchen gardens and waste grounds, far from dwellings.

The burning of ovens in houses was forbidden during summer. During that same time, the first water pumps were invented for fire extinguishing.