A. Sutherland - AncientPages.com - Among the most interesting archaeological finds that has been at times associated with Celtic culture is the Gundestrup Cauldron, a magnificent vessel made from richly decorated plates of silver that were assembled into a single cauldron.

However, the place where the artifacts was discovered, was never inhabited by the Celts.

Was the artifact manufactured at a location somewhere in Central Europe? Is it a result of cultural contacts between the Thracians and Celts in Bulgaria? 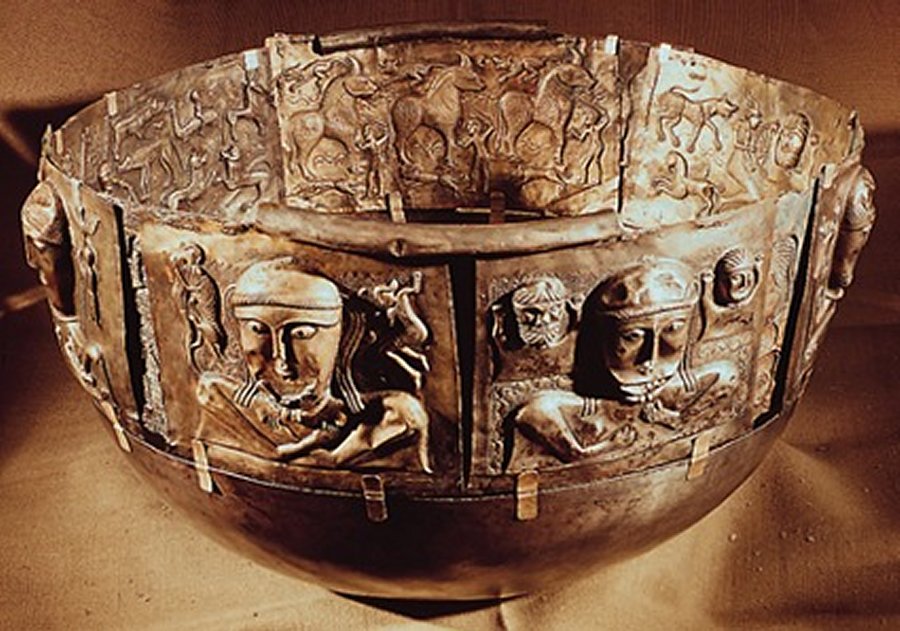 The almost 9 kg heavy cauldron is decorated with cult images difficult to interpret. On the outside is seen divine heads flanked by small figures; the main cult was an important element in the Celtic religion. The inside shows inter alia sword heroes confronting a procession of fabulous creatures (possibly unicorns). The National Museum, Copenhagen.

The Gundestrup Cauldron is the largest single silver object known from the La Tene era, when La Tène Culture flourished from about 500 BC to the Roman conquest in the 1st century BC, in several countries such as Belgium, eastern France, Switzerland, Austria, Southern Germany, the Czech Republic, Poland, Slovakia, Slovenia, Croatia and parts of Hungary and Romania.

It is generally agreed that the Gundestrup Cauldron dates to the mid-2nd century BC, but its manufacturing place and time have been a matter of much debate over the course of the last century.

The cauldron was found in pieces in 1891, in a bog at Gundestrup in Northern Jutland, Denmark, in a region that has never been associated with Celtic habitation. The artifact weighs 9 kg and consists of 14 plates, is 42 cm high and 69 cm in diameter; it has round bottom, with a double upper part composed of the relief-filled outer and inner plates. 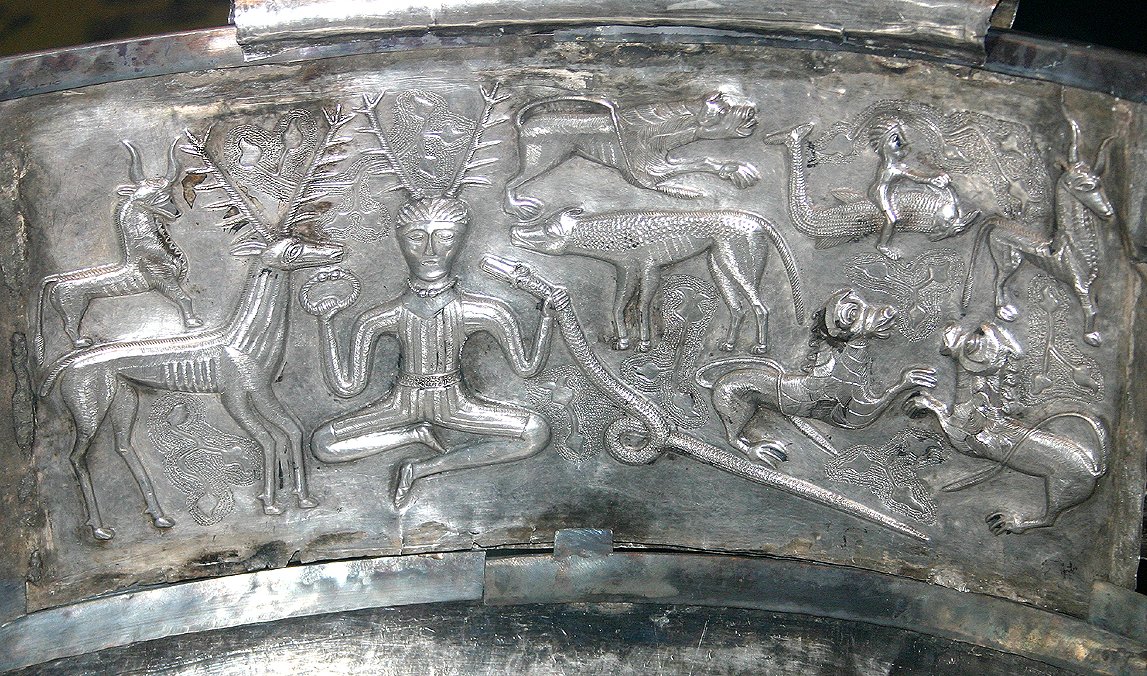 The clearest image of Cernunnos is found on the silver votive cauldron, the Gundestrup Cauldron, discovered in Denmark which shows him seated, wearing a stripy close-fitting tunic and trousers, with a royal torc or neck-ring about his neck. In one hand he holds up another torc while in the other he holds a ram-headed snake. (At display at the National Museum (Nationalmuseet) in Denmark). photo via wikipedia

The outside has originally consisted of eight almost square tiles, seven of which have been preserved; each of these adorned by an idol-eye glass of additions. The inside consists of five plates adorned with idols, hunting and sacrificial scenes. The base plate is different from the others by its high relief and exceptional artistic quality.

Interestingly, the silver working of the artifact is not considered to represent typical Celtic metallurgy, but there is also some evidence that suggests considerable Celtic influence, especially in the images depicted on the cauldron that seem to be derived from Celtic mythology.

Moreover, analyses of both the silver and the tin that were used to hold the plates together, clearly indicate that metalwork originates from regions of Europe usually associated with Celtic habitation.

Gundestrup Cauldron, one of the scenes. © The National Museum of Denmark

Was the cauldron produced by Thracian smiths at the request of a Celtic tribe in Gaul? It is unknown how the artifact came to be in Denmark but there are different suggestions and one of them is that it was looted and then transported to Denmark by the Cimbri, a Germanic tribe.

A Greek geographer, philosopher, and historian, Strabo, and Tacitus, a historian of the Roman Empire, identify the Cimbri people with a group living in Jutland, but strong evidence for this connection does not exist.

The commonly accepted thesis that the Gundestrup artifact was manufactured in Thracian southeast Europe was recently questioned.

Silversmithing was a speciality of the region, researchers say, but this particular skill was developed in Thrace in the 5th and 4th centuries BC - much earlier than the proposed date for the cauldron.

Wherever  the artifact was  made and whatever influences its rich mythological imagery contains,  the Gundestrup vessel must have been an important ritual object.