Ellen Lloyd - AncientPages.com - Many amazing archaeological discoveries have been made in the Land of The Pharaohs. Still, archaeologists cannot often find nearly intact burials filled with the most extraordinary ancient treasures left untouched for three thousand years. 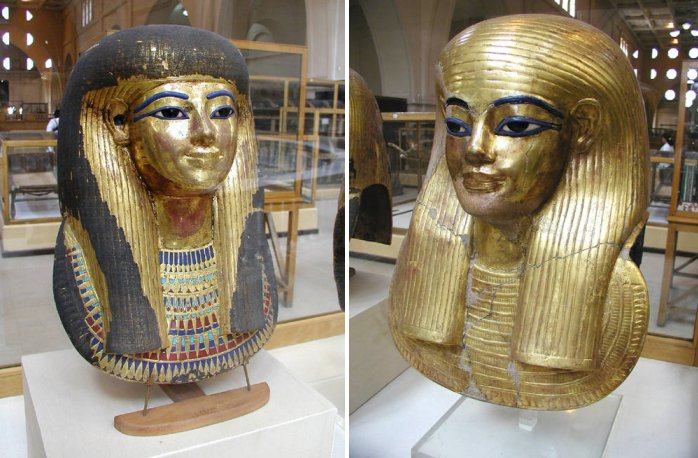 The Egyptian couple Yuya and Tjuyu were not particularly important historical individuals. They gained historians' attention because they were the parent of Queen Tiye, the mother of Akhenaten. After their death, years passed, and perhaps Yuya and Tjuyu would have been forgotten. Still, the discovery of their great tomb in the Valley of the Kings gave them a prominent place in historical and archaeological records.

Most ancient Egyptian tombs have been looted, but few thieves had the opportunity to enter Yuya and Tjuyu's tomb, KV46. Their graves escaped serious robbery because this burial place was protected by construction debris.

Who Was Yuya and Tjuyu?

Yuya and his wife Tjuyu lived during the Eighteenth Dynasty of Egypt (circa 1390 BC). Yuya was a powerful ancient Egyptian courtier and Tjuyu (also translated as

(Touiyou, Thuiu,Thuya or Thuyu) was a noblewoman. They were parents of Queen Tiye and Anen, a priest of Heliopolis and acquired the title Divine Father. 1

When Yuya and Tjuyu died, somebody put them to rest following ancient Egyptian burial traditions. Their bodies were prepared for the journey to the afterlife and provided various funerary goods.

Ancient Egyptians did not consider death to be the end of our existence. To them, death was mere "a transition to another reality". 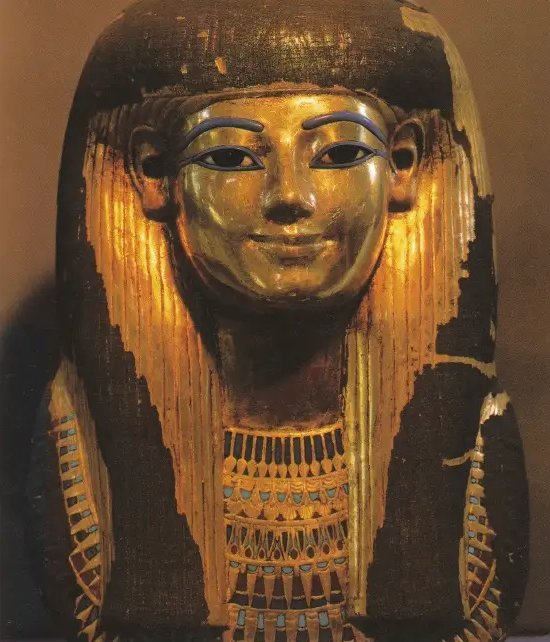 For many Egyptians, eternal life consisted of traveling along with the sun during the day and returning to the well-stocked tomb in the evening. To make this possible, it was important to make embalming, mummification, building tombs and perform other rituals to help the deceased experience of eternal peace." 2

Studies of the mummified remains of Yuya and Tjuyu suggest they died at a relatively advanced age. Their hair was white, and the examination of their remains did not contradict  the verdict of their hair." According to archaeologists who excavated KV46 it would "not be a mistake to state that they had reached an age over sixty. From the relative position of the two sarcophagi in the tomb, it seems that the husband was the first to die, but material is lacking to decide this question." 3

The Valley of the Kings, located on the Nile's west bank near Luxor, was used for burials from approximately 1539 B.C to 1075 B.C. Before the discovery of King Tutankhamun's tomb in 1922, the tomb of Yuya and Tjuyu was one of the most celebrated discoveries in Egyptian archaeology.

The private tomb of Yuya and Tjuyu, located between KV3 and KV4, was discovered in 1905 by James E. Quibell under the sponsorship of Theodore M. Davis.

When archaeologists entered KV46, they were amazed to see so many beautiful, well-preserved ancient objects.

An Egyptian excavator beside the outer coffin of Yuya. Credit: Public Domain

"The outer doorway 'was closed within eighteen inches of the top with flat stones, about twelve inches by four, laid in Nile mud plaster'… This wall 'plastered over with mud and stamped in many places with the jackal-and-nine captives seal, displayed an opening in the top right-hand corner, at chin height – so clearly it was not be an intact tomb. 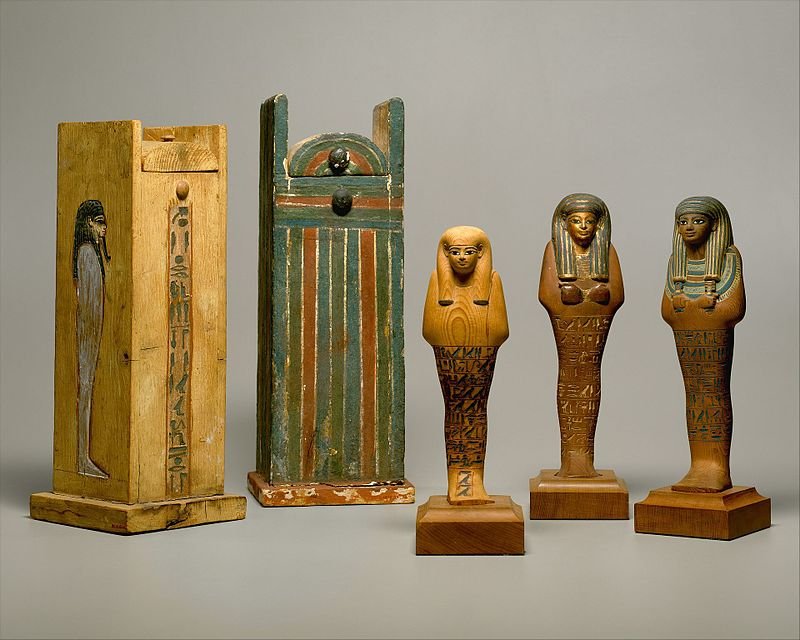 Beyond lay a corridor, empty save for a few stray items, leading down to a second blocking, stamped with the seal of the necropolis administration but likewise broken through at the top. On the floor, at the base of the wall, were two pottery bowls containing dired mud – evidence, perhaps, of small-scale plastering work undertaken following the first period of theft – and the sticks used to apply it." 4

When the excavators peered over the wall, an eerie sight met their eyes:

"Imagine entering a town house which had been closed for the summer: imagine the stuffy room, the stiff silent appearance of the furniture, the feeling that some ghostly occupants of the vacant chairs have just been disturbed, the desire to throw open the windows to let lif into the room once more. That was perhaps the first sensation as we stood, really dumbfounded, and stared around at the relics of the life of over three thousand years ago," Arthur Weigall, who participated in the excavation of KV46, recalled. 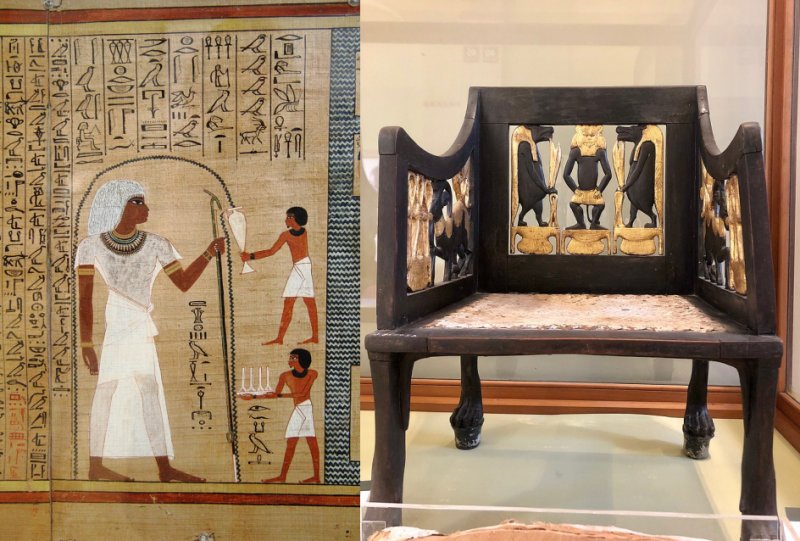 When archaeologists entered KV46, due to its sealed environment, it still had silver shining brightly. As soon as scientists opened the tomb, everything turned black. Three thousand-year-old vessels with thick liquid oil and honey still preserved the scent. The mummies of Yuya and Tjuyu were also in excellent condition.

The mummy of Yuya "was enclosed in three separate coffins, nested one within the other. These again were placed in a large rectangular wooden sarcophagus, the latter being mounted on a sledge with roller in front." 3

The coffins were covered with hieroglyphs and images showed a procession of gods led by Thoth.

Tjuyu has also been placed in "two separate coffins one within the other, and placed in a large rectangular wooden sarcophagus mounted on a sledge." 3

Inside KV46, archaeologists also found magnificent jewelry, the Book of the Dead, and several canopic jars.

Still, of all magnificent ancient objects found in KV46, the well-preserved chariot was the most extraordinary one. 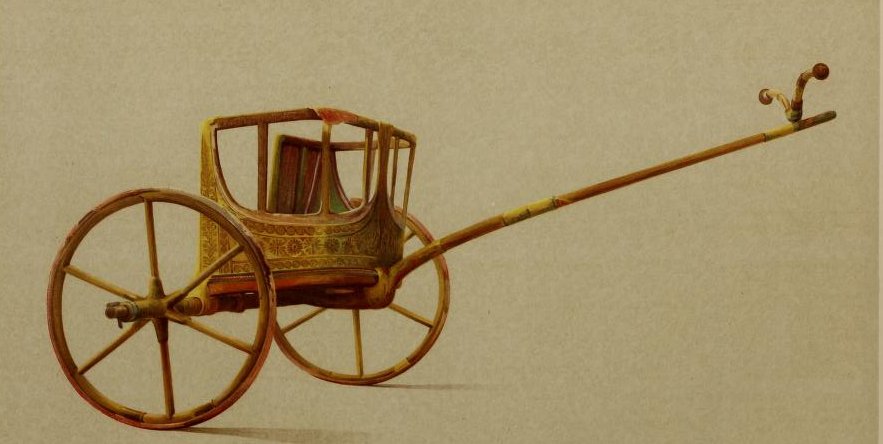 Beautifully decorated with spirals and rosettes in gild plaster, the nameless chariot most likely belonged to  Yuya. "In it nearly perfect preservation: the framework of the body, the wheels, and the pole are intact and even the leather-work which has been stripped from the sides of the "body" has been found and could be put back in place. It is doubtful whether it was used except for the funeral procession, for the leather types are hardly scratched." 3

The unique archaeological treasures discovered in Yuya and Tjuyu's tomb give us an essential glimpse into ancient Egyptian history, traditions, and religious beliefs.