AncientPages.com - Memories of sky gods traversing the ancient skies have been preserved in myths, legends and oral lore in almost every culture around the world.

People inhabiting the South Seas also have their ancient legends about gods on 'magic birds' flying down from lands in the sky to aid men on Earth.

The god Pourangahua flew from legendary dwelling place of Hawaiki to New Zealand on a magic bird. The name of his bird was Manunui-a-Ruakapanga which means 'The Big Bird of Ruakapanga. 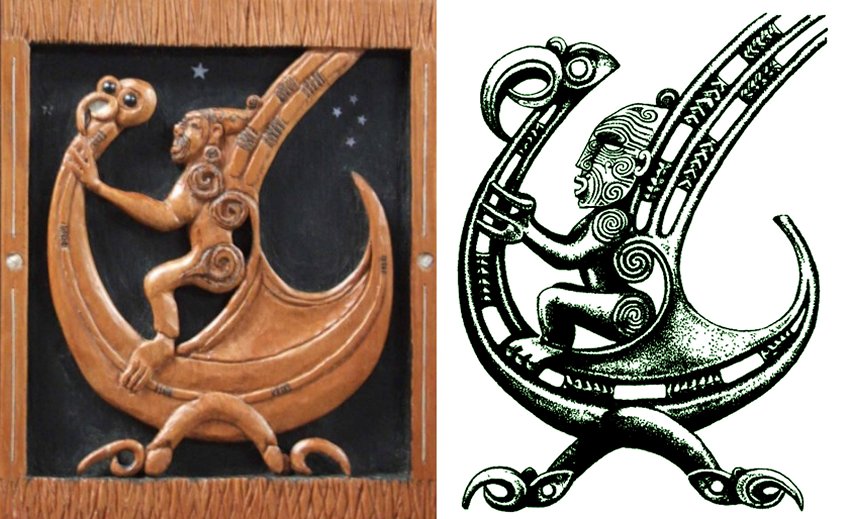 God Pourangahua was brought to New Zealand on a silver firebird. When the firebird, with this person sitting on its back took off, it burnt all surrounding scrub. Photo credits: woodgroupsa.org.au/

Hawaiki is a compound word that comes from Old Indian and can be translated as "from the Milky Way."

The oldest Maori prayer is attributed to this Pourangahua and is as follows:

"I come, and an unknown earth lies below my feet.
I come and a new heaven turns above me.
I come on to this earth and it is a peaceful resting-place for me.
O spirit of the planets! The stranger humbly offers you his heart as nourishment."

What was this silver bird that was given to Pourangahua by Tane, the god of man and forests?

Tane led Pourangahua to ‘Te Manunui a Ruakapanga’ (The Great Bird of Ruakapanga) his flying moa. “Here is your canoe of the skies” Tane said. “Be gentle with your ancestor who bears you so bravely.”

It is said that when the firebird, with Pourangahua sitting on its back took off, it burnt all surrounding scrub. He was away for some time and when he came back he advised he knew of a place that was covered in bush and that they all should go there to live.

This is an ancient Maori myth. Is it really only a myth? Or perhaps the ancient Maori saw an unidentified flying machine, a real, advanced-tech craft and their only way to describe the object they witnessed was by carving it to be preserved for future generations? Whatever the truth may be, the story makes you think.

Myths often reveal true history and legends are usually based on a true event in the past.

Copyright © AncientPages.com. All rights reserved. This material may not be published, broadcast, rewritten or redistributed in whole or part without the express written permission of AncientPages.com.
Source:

Reg Griffin, Sungod the most probable theory of our time.