AncientPages.com - In Greece, underwater excavations of Lechaion, ancient Corinth’s partially submerged harbour town, reveal the infrastructure of more than a thousand years of flourishing maritime trade. Researchers from the Greek Ministry of Culture and Sports and the University of Copenhagen are using cutting-edge methods to uncover the configuration and scale of the harbour.

Corinth ranked among the most economically and militarily powerful, and enduring, cities of the Greek, Roman and Byzantine periods. The city had an exceptional geographical advantage in the North East corner of the Peloponnese and controlled the Isthmus that facilitated land travel between Northern and Southern Greece, and travel by sea between the Western and Eastern Mediterranean. 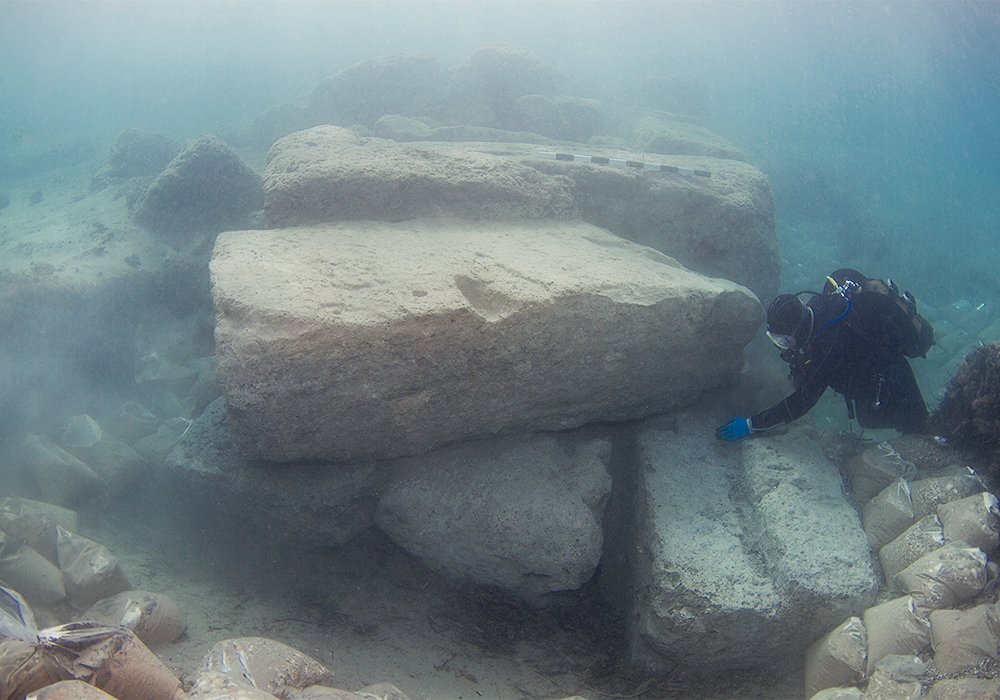 Corinth, which lay some three kilometres from the sea, built on this natural advantage by constructing two harbour towns – the main harbour Lechaion on the Corinthian Gulf to the West, and Kenchreai on the Saronic Gulf to the East (see map to the right).

"According to ancient sources, most of the city's wealth derived from the maritime trade that passed through her two harbours, eventually earning her the nickname ‘Wealthy Corinth’," says archeaologist Bjørn Lovén from the University of Copenhagen and co-director of the Lechaion Harbour Project (LHP.

The moles and warehouses of Lechaion saw vibrant maritime activity for over a thousand years, from the 6th century BC to the 6th century AD. Ships and fleets departed from here laden with cargoes, colonists and marines destined for ports all over the Mediterranean and beyond.

Lechaion’s extensive underwater ruins lie nearly untouched, but that picture is changing. The Lechaion Harbour Project (LHP), a collaboration between the Ephorate of Underwater Antiquities in Greece, the University of Copenhagen, and the Danish Institute at Athens, has undertaken an exploration of  the submerged main harbour of ancient Corinth. 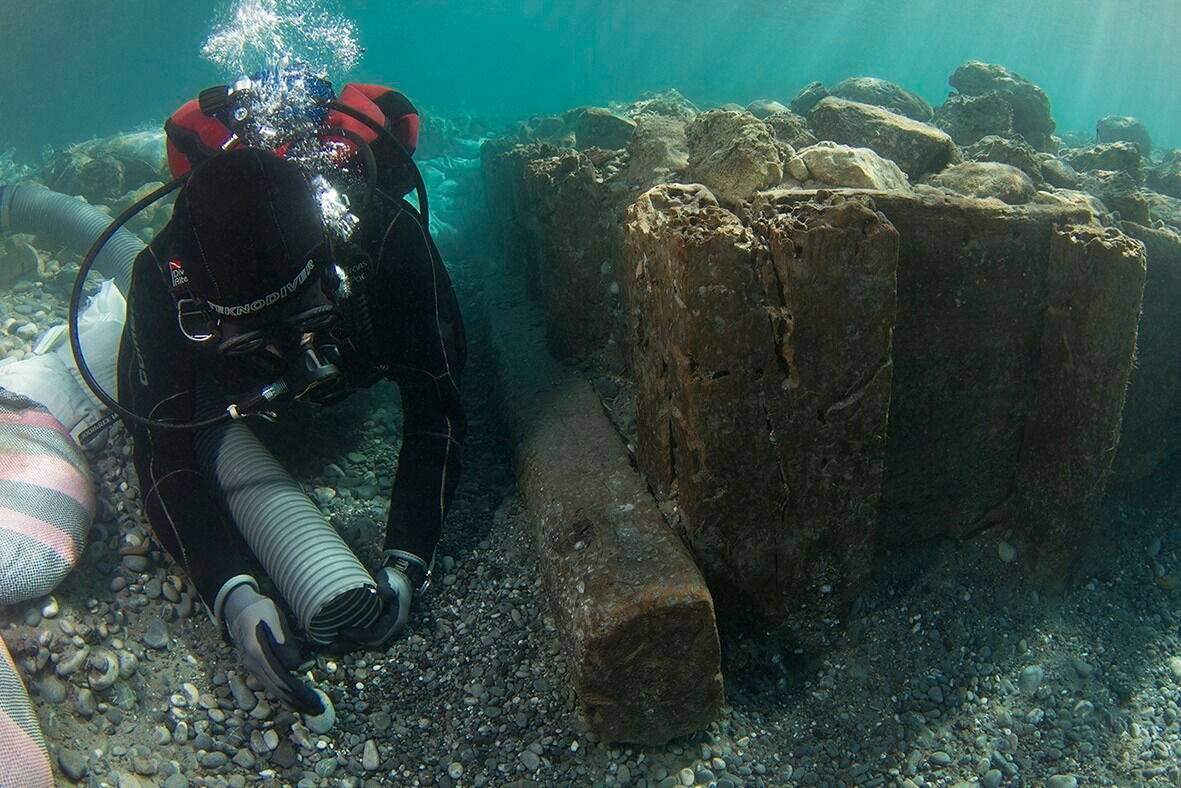 The research team has initiated full-scale excavations and a digital and geophysical survey of the seaward side of the harbour using various innovative technologies, including a newly-developed 3D parametric sub-bottom profiler. To date they have uncovered two monumental moles constructed of ashlar blocks, along with a smaller mole, two areas of wooden caissons, a breakwater, and an entrance canal that leads into Lechaion’s three inner harbour basins.

The 2015 excavations focused on two areas. The first is a unique, early Byzantine mole constructed of six well-preserved wooden caissons together stretching 57 meters in length. The second is the stone-lined entrance canal to the little-explored Inner Harbour of Lechaion.

“We have found and documented several monumental architectural structures, built at great expense, showing that Lechaion was developed as a grand harbour to match the importance of her powerful metropolis, Corinth,” says Bjørn Lovén.

The discovery of well-preserved wooden caissons, however, caught everyone off guard. The wooden caissons acted as single-mission barges, built for the express purpose of being sunk together with their concrete cargoes, all of which were designed to form a solid foundation to hold back the force of the sea along this highly exposed stretch of coast .

Roman imperial engineers employed a similar technology on a large scale at Caesarea Maritima in Israel in the late first century BC, but these are the first of their kind ever discovered in Greece with their wooden elements still preserved. A preliminary C-14 carbon date places the caissons in the time frame of the Leonidas Basilica, the largest Christian church of its time. Construction of the basilica began in the middle of the 5th century AD. It was 180 meters long – about the same size as the first building phase of St. Peter’s Basilica in Rome. Scholars generally assume that harbour facilities in the Mediterranean were built in the Greek and Roman period, then simply repaired and maintained during the Byzantine period. The discovery of the mole constructed of wooden caissons challenges this picture. 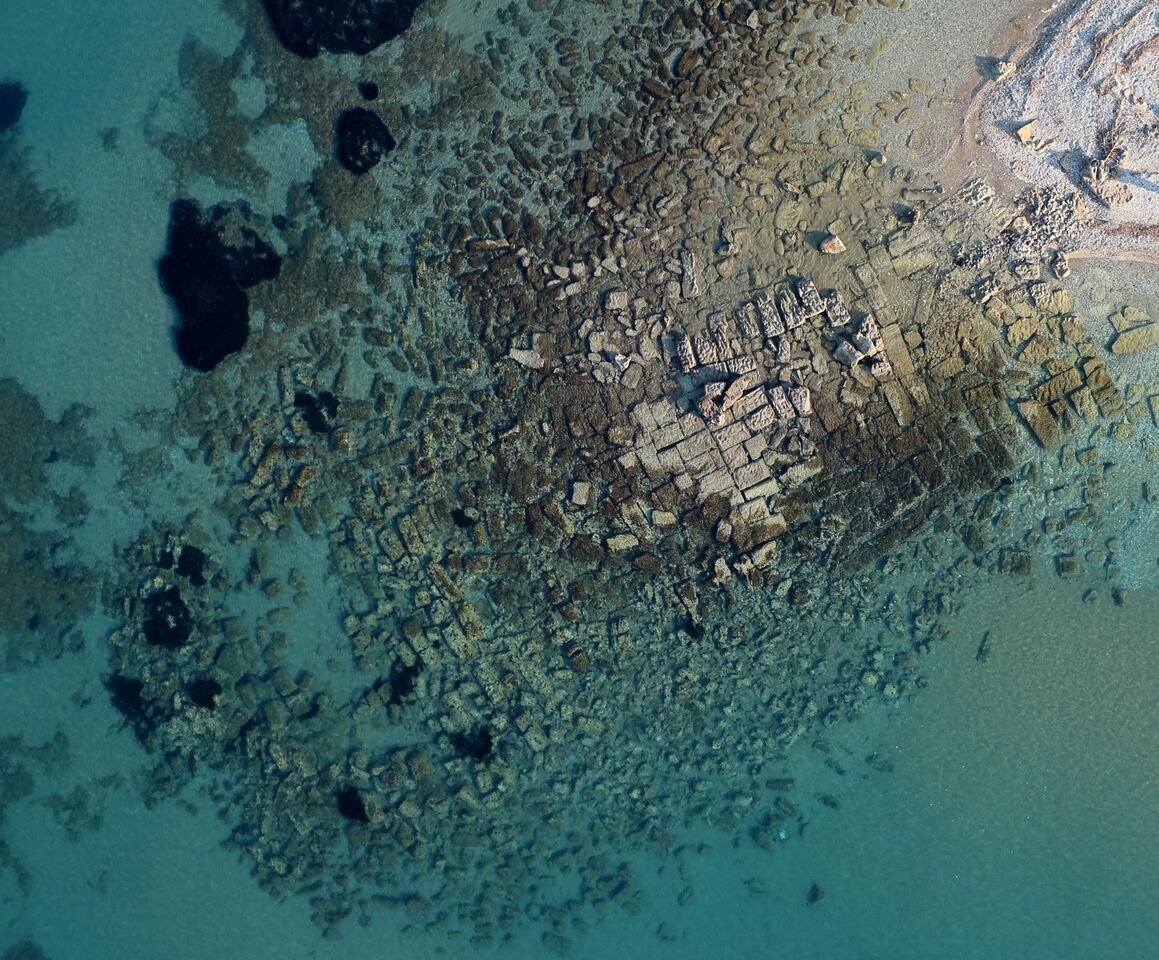 Is it possible that the construction of this immense edifice coincided with renewed buildup of the harbour, thereby facilitating the arrivals and departures of visitors and pilgrims? At all events, the benefit of these innovations was short-lived, as Lechaion and its basilica were destroyed by a massive earthquake in the late 6th or early 7th century AD.

Vestiges of the ancient entrance canal have been exposed on the modern beach for years, so there has been little doubt of its location. The scale, however, was surprising. So far, the team has uncovered some 55 meters of its sides, which protected ships coming into and exiting the three inner harbours of the town. And the team has also found evidence that the ancient harbour was likely located much farther to seaward, perhaps as far as 45 meters from the modern shore. A geophysical study is underway to understand how the site has evolved over time as a result of sea-level change and possible coastal subsidence.

According to Bjørn Lovén, the Lechaion Harbour Project is endeavouring to advance our understanding of how this bustling harbour evolved over time and enabled the development of Corinth as a major economic and military power during the Greek, Roman and Byzantine periods.