Jan Bartek - AncientPages.com - UniSC's Professor Patrick Nunn and Roselyn Kumar didn't set out to rewrite history. They were simply trying to research how India's coastline had changed over the centuries.

"There were these accounts from ancient voyages describing this fabulous harbor in Calicut (present day Kozhikode) and how it was one of the greatest ports in Asia," Professor Nunn said. 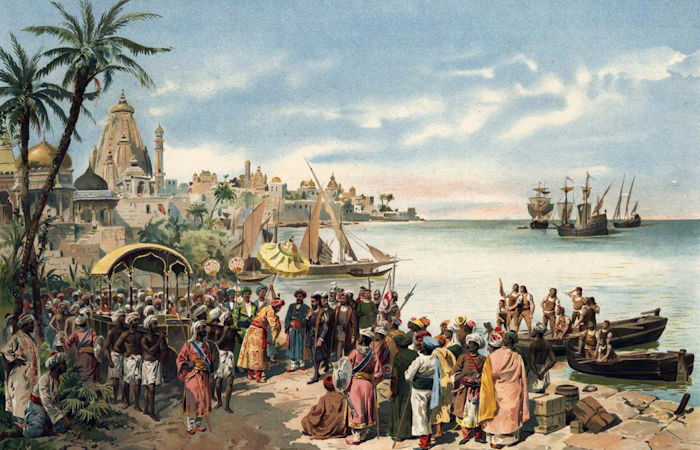 But something was bothering him. At some point in the 16th century, the depictions and illustrations of Calicut stopped matching up with the old ones.The river was wrong. So were the boats. Where was the promised great maritime city and the trees heaving with fruit?

"It was just a sandy beach. It looked like the worst possible place for a harbor," Professor Nunn said. "It didn't make sense."

It was like Calicut had somehow teleported to a completely different location.

The trouble started in 1498 with a man who was no stranger to trouble—Vasco da Gama. Da Gama had been sent by the King of Portugal to find a sea route to India and establish trade relations in Calicut. But instead of anchoring off in a grand harbor that compelled previous visitors to espouse its magnificence, Professor Nunn and Kumar believe da Gama missed the mark and landed 33km to the north near a significantly less impressive beach town he thought was Calicut.

A simple mistake that rewrote history

The Portuguese later realized their error, as evidenced by their repeated attacks on the actual Calicut, but never rectified this in their language or writing. Things were complicated further when the centuries-old port of legend appears to have met its demise.

"Decades after that, what I infer is that a massive tsunami swept ashore and destroyed the old Calicut. So, the Zamorin (the local rulers) simply decided to move to what the Portuguese thought of as the new Calicut," Professor Nunn said.

With the old city gone, subsequent travelers to the "new" Calicut believed it to be that same grand harbor of antiquity. The histories of two different places, became one—a confused amalgamation, riddled with inconsistencies. 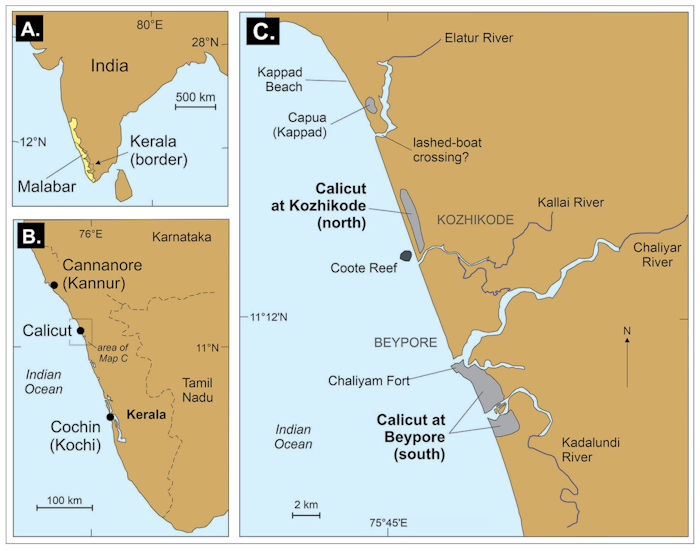 A. India, showing location of the former region of Malabar (yellow) and the border of the modern state of Kerala; B. Kerala, showing the locations of ancient (modern) trading ports; C. The study area, showing the locations of the earlier ‘Calicut at Beypore’ and the later ‘Calicut at Kozhikode’. Credit: International Review of Environmental History (2022). DOI: 10.22459/IREH.08.02.2022.03

"What seems particularly extraordinary, is that almost all visitors to the area after the year 1590 thought there was just one Calicut, even though local informants undoubtedly told them what had happened to the other," Roselyn Kumar said.

This is the bigger issue raised by Professor Nunn and Kumar. Why have the oral histories of other cultures been met with such skepticism and doubt over the course of Western history, while that same critical gaze is not turned to our own written accounts?

"The story of the two Calicuts is a reminder of the incompleteness of history and the danger of reconstructing it only from what can be seen, touched, read or related. There is much that is missing from current understandings of human history, requiring that novel and occasionally imaginative approaches are sometimes needed to complete it," Roselyn said.

It also raises another question. If we were wrong about Calicut, what else did we get wrong?

"If historians make assumptions about the past that turn out to be incorrect, then entire sequences of deductions may need to be reeled back. That's difficult for us narrative-loving humans to accept," Professor Nunn said. "Growing up you're taught one history as the truth. But the truth is a lot more nuanced than that."

The findings are published in the journal International Review of Environmental History.