A mysterious, well preserved 2,000-year-old pyramid-shaped staircase constructed of large ashlar stones was recently uncovered by the Antiquities Authority on an ancient street in the City of David, adjacent to the destroyed Second Temple, according to announcement.

The structure was revealed during an excavation of an ancient roadway ascending from the Siloam (Shiloah) Pool to the Temple Mount, carried out in coordination with the Israel Nature and Parks Authority and the City of David Foundation. 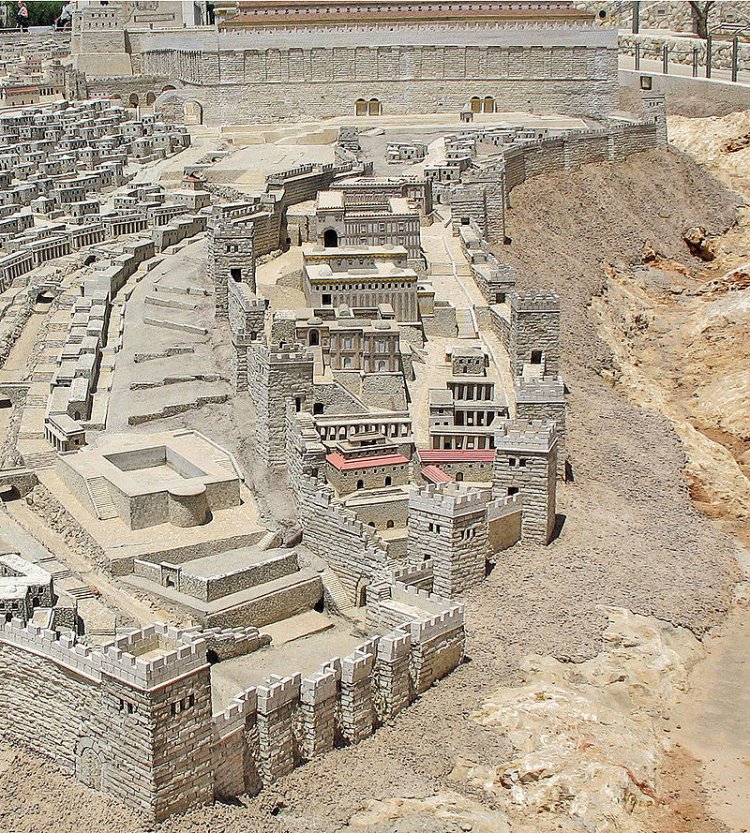 Digital reconstruction of the Biblical City of David in the period of Herod's Temple, Holyland Model of Jerusalem. The southern wall of the Temple Mount appears at top. Photo credits: commons.wikimedia.org

According to archaeologists Nahshon Szanton and Joe Uziel, who directed the excavation on behalf of the authority, such a find in the area is unprecedented.

“The structure exposed is unique,” the archaeologists said in a joint statement. “To date, such a structure has yet to be found along the stepped street in the numerous excavations that have taken place in Jerusalem, and to the best of our knowledge, outside of it.”

For this reason, they said, its exact use “remains enigmatic.”

“Given the lack of a clear archaeological parallel to the stepped-structure, the purpose of the staircase remains a mystery,” they said, adding that the structure is built along the street at a location that is clearly visible from afar by passers-by making their way to the Temple. 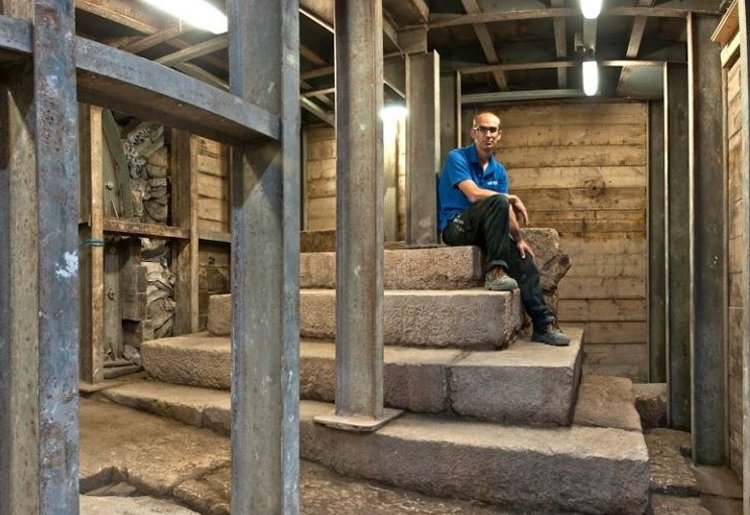 “We believe the structure was a kind of monumental podium that attracted the public’s attention when walking on the city’s main street. It would be very interesting to know what was said there 2,000 years ago. Were messages announced here on behalf of the government? Perhaps news or gossip, or admonitions and street preaching? Unfortunately we do not know.”

Szanton and Uziel said that two British archaeologists, who discovered a small portion of the structure about 100 years ago, mistakenly thought the steps led into a house that was destroyed.

“They would certainly be excited if they could come back today and see it completely revealed,” they said.

The archaeologists said the well-preserved street, built of enormous stone slabs, was constructed sometime in the fourth decade of the first century CE.

It was one of the largest construction projects undertaken in Jerusalem during the Second Temple Period.

“The street most likely runs above the 2,000-year-old drain - age channel, discovered a number of years ago, which carried rain water out of the city,” they said.

Dozens of whole pottery and stone vessels as well as glassware were found at the foot of the pyramid-shaped staircase.

“We know from rabbinic sources there were ‘stones’ that were used for public purposes during the Second Temple Period,” they said.

“For example, one source cites the ‘auction block’ in connection with the street: “[A master] will not set up a market stand and put them [slaves] on the auction block.” (Sifra, Behar 6) Moreover, in the Talmud, the “Stone of Claims” is mentioned as a place that existed in Jerusalem during the Second Temple Period: “Our Rabbis taught: There was a Stone of Claims in Jerusalem: Whoever lost an article repaired thither, and whoever found an article did likewise. The latter stood and proclaimed, and the former submitted his identification marks and received it back.” (Bava Metzia 28:B) “It is certainly possible the rabbinical sources provide valu - able information about structures, such as this, although for the time being there is no definitive proof,” the researchers said.

On Thursday, at the City of David Studies of Ancient Jerusalem’s 16th Annual Conference, Szanton and Uziel are to present their findings from the excavation, as well as the different interpretations regarding the nature of the podium.

The conference is open to the public.