AncientPages.com - For 13 centuries, the Virupaksha Temple in Pattadakal has been one of the most recognizable landmarks in Indian art -- a towering layer cake of elaborate, hand-carved friezes populated by a bevy of Hindu deities and symbols.

The temple (built in the 8th Century) is carved in stone, and its walls, pillars, panels, and columns are decorated with beautiful carvings depicting episodes from Shiva’s life, different scenes from the Ramayana, and the Mahabharata, and scenes from Krishna’s childhood. 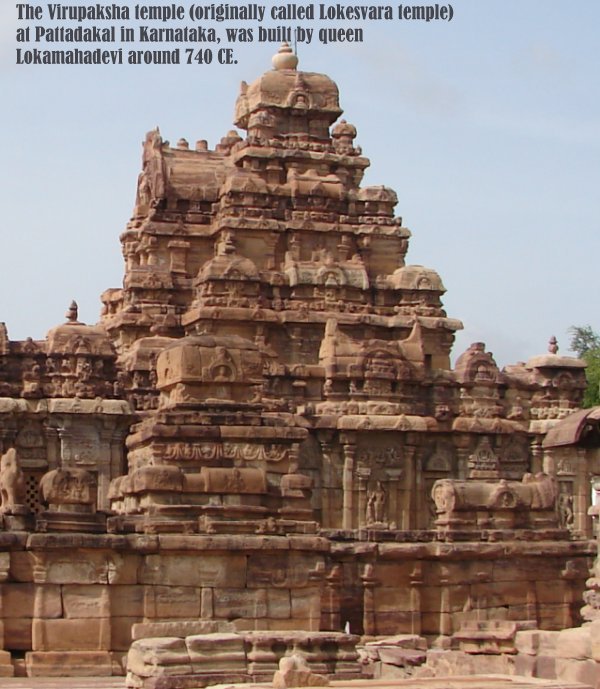 "It seemed like a clear sequence for devotees to follow," she says. "It didn't seem to be random images. There was a particular message that they could take away from it."

It is also believed that even the Kailasa Temple built in Ellora was based on the model of this Virupaksha temple. However, these figures are more than just architectural decoration, according to Cathleen Cummings, Ph.D., an associate professor in the UAB Department of Art and Art History, who devoted more than decades to study this art.

Her discoveries identify images that glorify the king by referencing his family, conquests, and accomplishments, as well as other sculptural elements that offer religious guidance. Cummings describes one series of sequential inscriptions that depict taking refuge in a deity, showing faith, and then salvation.

Similar types of religious and royal imagery adorn centuries-old churches across the world, Cummings notes. "The idea of iconographic programs has been accepted in the context of Christian art for quite a long time."

Cummings's research on the temple also sheds new light on the important role that women played in ancient Indian politics and culture.

Queen Lokamahadevi, the chief wife of king Vikramaditya II, led the construction of the temple to the Hindu god Shiva during the early Chalukya dynasty, around the year 733. 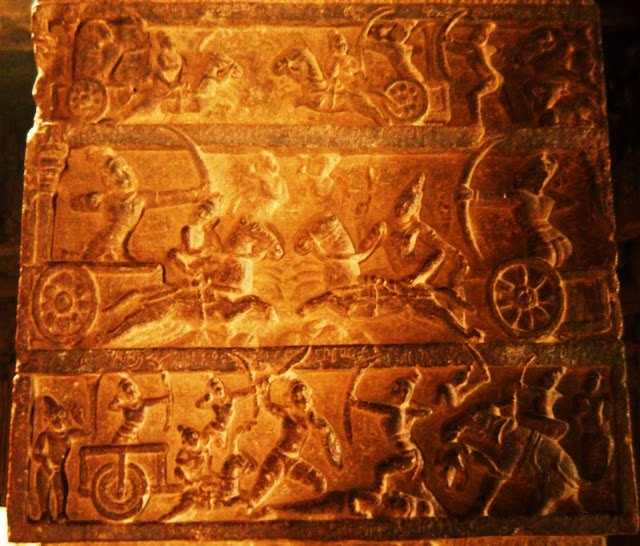 A frieze carved on the side of a pillar depicting a scene from the Mahabharata, the 3000-year-old Sanskrit epic, inside the Virupaksha temple.

The queen wanted a temple "dedicated to the king's reign and victory in wars with three other dynasties," Cummings explains. Though women were part of the king's inner circle, Cummings found the queen's prominent placement in the temple's iconography intriguing.

"Women have a very prominent role as temple patrons and probably also controlled resources much more than we tend to believe or know," Cummings says. 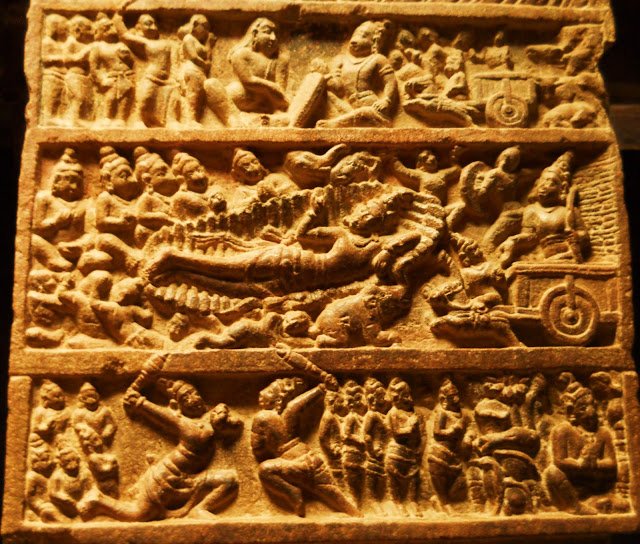 Other Mahabharata scenes inside the Virupaksha Temple "For a long time, there was an assumption that the sculptures on the outside of Hindu temples didn't necessarily mean anything as a group. But "it seemed to me right away that there were certain, very conscious choices being made as to where deities and specific forms of deities were placed," she said.

"The dynasty that built Virupaksha was among the earliest to participate in the tradition of building large temples in stone," she says. "This particular temple is the best preserved and probably the most elaborate one that they built."

The builders didn't leave many clues for Cummings to follow, however. Consequently, Cummings followed a scientific path, developing a hypothesis and following her instincts to find evidence to make her case. She pored over the placement of statues, studied Sanskrit inscriptions and ancient court documents from contemporary South Indian dynasties, investigated the temple's rituals, and traveled to other Indian holy sites to build upon her findings.

"Apart from a few, very terse inscriptions on this and other Early Chalukya monuments, historians have not recovered much primary source documentation for this dynasty."

The result of the studies is now part of Cummings' book "Decoding a Hindu Temple: Royalty and Religion in the Iconographic Program of the Virupaksha Temple, Pattadakal".