AncientPages.com - Jonah images in later "early" Christian art, such as images found in the Roman catacombs, are the most common motif found on tombs as a symbol of Christian resurrection hope.

In contrast, the story of Jonah is not depicted in any first century Jewish art and iconographic images on ossuaries are extremely rare, given the prohibition within Judaism of making images of people or animals.

"Everything in this tomb seems unusual when contrasted with what one normally finds inscribed on ossuaries in Jewish tombs of this period," said James D. Tabor, professor and chair of religious studies at the University of North Carolina at Charlotte.
"Of the seven ossuaries remaining in the tomb, four of them have unusual features." 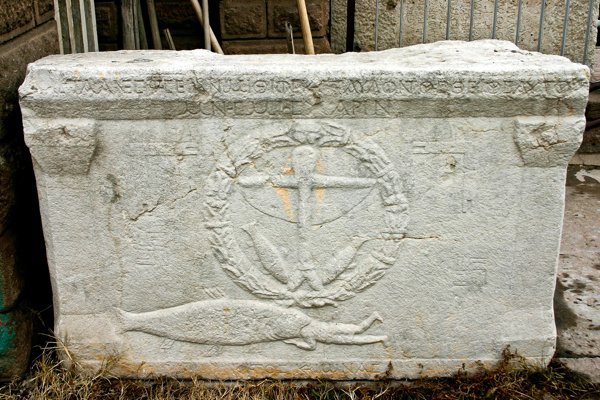 "These two tombs, less than 200 feet apart, were part of an ancient estate, likely related to a rich family of the time. We chose to investigate this tomb because of its proximity to the so-called 'Jesus tomb,' not knowing if it would yield anything unusual."

The archaeological examination by robotic camera of an intact first century tomb in Jerusalem has revealed a set of limestone Jewish ossuaries or "bone boxes" that are engraved with a rare Greek inscription and a unique iconographic image that the scholars involved identify as distinctly Christian.

The four-line Greek inscription on one ossuary refers to God "raising up" someone and a carved image found on an adjacent ossuary shows what appears to be a large fish with a human stick figure in its mouth, interpreted by the excavation team to be an image evoking the biblical story of Jonah.

In the earliest gospel materials the "sign of Jonah," as mentioned by Jesus, has been interpreted as a symbol of his resurrection. 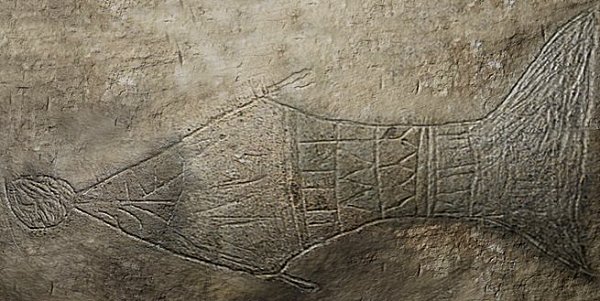 A CGI-enhanced image of "Jonah and the Whale," an engraving that has led some Biblical scholars to conclude that a tomb in Jerusalem is the last resting place of the prophet Jonah. (UNC Charlotte)

The tomb in question is dated prior to 70 CE, when ossuary use in Jerusalem ceased due to the Roman destruction of the city.

Accordingly, if the markings are Christian as the scholars involved believe, the engravings represent – by several centuries - the earliest archaeological record of Christians ever found.

The engravings were most likely made by some of Jesus' earliest followers, within decades of his death. Together, the inscription and the Jonah image testify to early Christian faith in resurrection.

The tomb record thus predates the writing of the gospels. 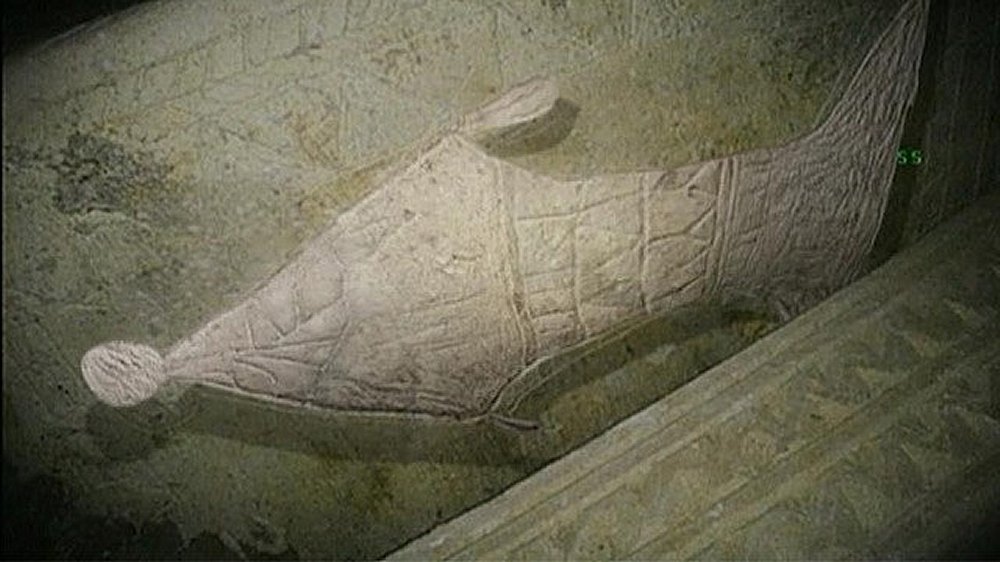 Biblical historian James Tabor and a team of archaeologists uncovered this engraving from a 2,000-year-old tomb in Jerusalem, which they believe depicts Jonah being swallowed by the whale, symbolizing Jesus' resurrection - Credit: Discovery Channel

"If anyone had claimed to find either a statement about resurrection or a Jonah image in a Jewish tomb of this period I would have said impossible -- until now," Tabor said. "Our team was in a kind of ecstatic disbelief, but the evidence was clearly before our eyes, causing us to revise our prior assumptions."

The findings and their interpretation are likely to be controversial, since most scholars are skeptical of any Christian archaeological remains from so early a period. Adding to the controversy is the tomb's close proximity to a second tomb, discovered in 1980. 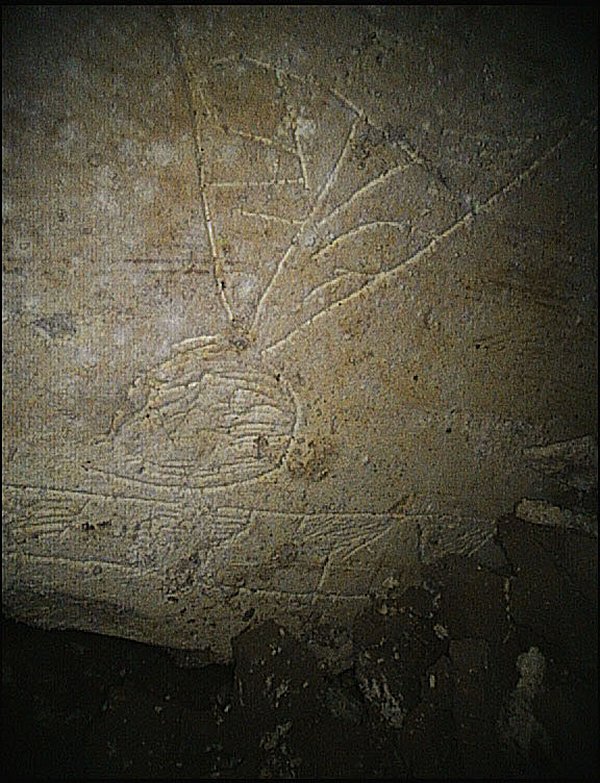 This tomb, dubbed by some "The Jesus Family Tomb," contained inscribed ossuaries that some scholars associate with Jesus and his family, including one that reads "Jesus, son of Joseph."
The tomb containing the new discoveries is a modest sized, carefully carved rock cut cave tomb typical of Jerusalem in the period from 20 BCE until 70 CE.

The tomb was exposed in 1981 by builders and is currently several meters under the basement level of a modern condominium building in East Talpiot, a neighborhood of Jerusalem less than two miles south of the Old City.

Archaeologists entered the tomb at the time, were able to briefly examine it and its ossuaries, take preliminary photographs, and remove one pot and an ossuary, before they were forced to leave by Orthodox religious groups who oppose excavation of Jewish tombs. 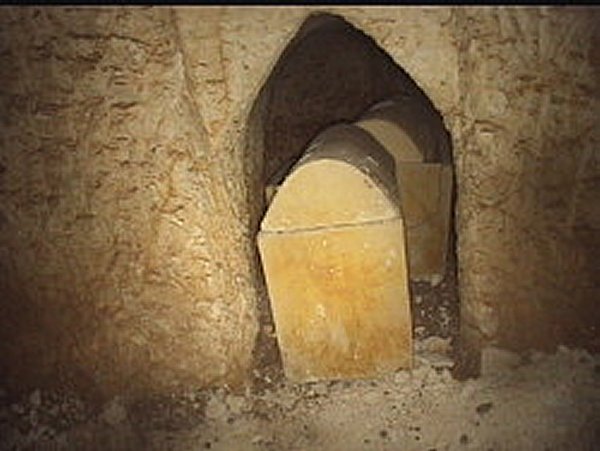 The ossuary taken, that of a child, is now in the Israel State Collection. It is decorated but has no inscriptions. The archaeologists mention "two Greek names" but did not notice either the newly discovered Greek inscription or the Jonah image before they were forced to leave. The tomb was re-sealed and buried beneath the condominium complex on what is now Don Gruner Street in East Talpiot.

The adjacent "Jesus tomb," was uncovered by the same construction company in 1980, just one year earlier. It was thoroughly excavated and its contents removed by the Israel Antiquities Authority.

The tomb's controversial ossuaries with their unusual cluster of names have been by some scholars associated with Jesus and his family. 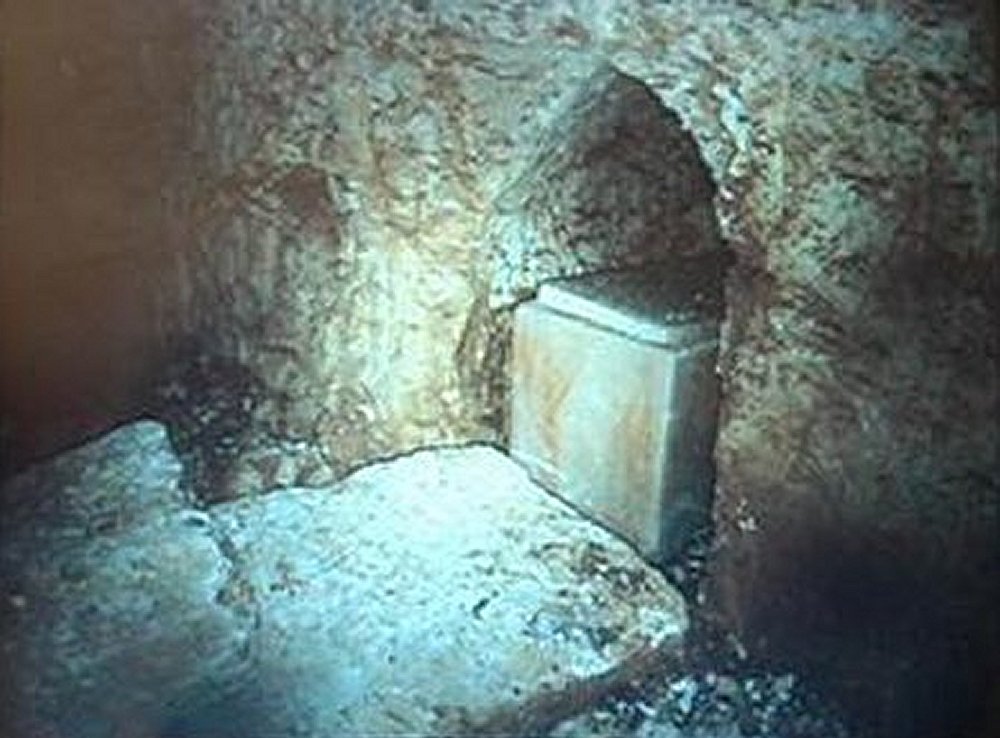 An ancient lost tomb discovered in Jerusalem could prove the existence of Biblical Jonah.

In 2009 and 2010, Tabor and Rami Arav, professor of archaeology at the University of Nebraska at Omaha, working together with Jacobovici, obtained a license to excavate the current tomb from the Israel Antiquities Authority under the academic sponsorship of the University of North Carolina at Charlotte.

Because of its physical location under a modern building (making direct access nearly impossible), along with the threat of Orthodox Jewish groups that would protest any such excavation, Tabor's team determined to employ a minimally invasive procedure in examining the tomb. 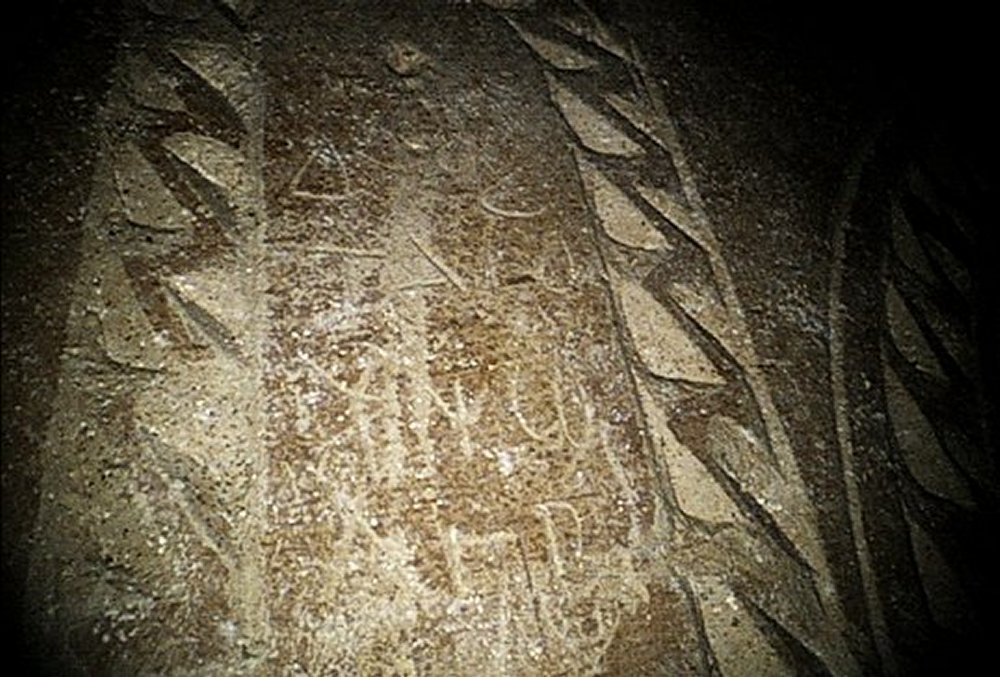 Jacobovici's team at the Toronto based Associated Producers developed a sophisticated robotic arm to carry high definition cameras, donated by General Electric. The robotic arm and a second "snake camera" were inserted through two drill holes in the basement floor of the building above the tomb.

The probe was successful and the team was able to reach all the ossuaries and photograph them on all sides, thus revealing the new inscriptions.

Beyond the possible Christian connection, Tabor noted that the tomb's assemblage of ossuaries stands out as clearly extraordinary in the context of other previously explored tombs in Jerusalem.

There are engravings on five of the seven ossuaries: an enigmatic symbol on ossuary 2 - possibly reading Yod Heh Vav Heh or "Yahweh" in stylized letters that can be read as Greek or Hebrew, though the team is uncertain.

Among the approximately 2000 ossuaries that have been recovered by the Israel Antiquities Authority, only 650 have any inscriptions on them, and none have inscriptions comparable to those on ossuaries 5 and 6.
Less than a dozen ossuaries from the period have epitaphs but, according to Tabor, these inscribed messages usually have to do with warnings not to disturb the bones of the dead. In contrast, the four-line Greek inscription contains some kind of statement of resurrection faith.

"This inscription has something to do with resurrection of the dead, either of the deceased in the ossuary, or perhaps, given the Jonah image nearby, an expression of faith in Jesus' resurrection," Tabor said.

The ossuary with the image that Tabor and his team understand to be representing Jonah also has other interesting engravings. These also may be connected to resurrection, Tabor notes. On one side is the tail of a fish disappearing off the edge of the box, as if it is diving into the water.

There are small fish images around its border on the front facing, and on the other side is the image of a cross-like gate or entrance—which Tabor interprets as the notion of entering the "bars" of death, which are mentioned in the Jonah story in the Bible.

"This Jonah ossuary is most fascinating," Tabor remarked. "It seems to represent a pictorial story with the fish diving under the water on one end, the bars or gates of death, the bones inside, and the image of the great fish spitting out a man representing, based on the words of Jesus, the 'sign of Jonah' – the 'sign' that he would escape the bonds of death."