AncientPages.com - The discovery of a 10-year-old's body at an ancient Roman site in Italy suggests measures were taken to prevent the child, possibly infected with malaria, from rising from the dead and spreading disease to the living.

The skeletal remains, uncovered by archaeologists from the University of Arizona and Stanford University, along with archaeologists from Italy, included a skull with a rock intentionally inserted into the mouth. Researchers believe the stone may have been placed there as part of a funeral ritual designed to contain disease — and the body itself. 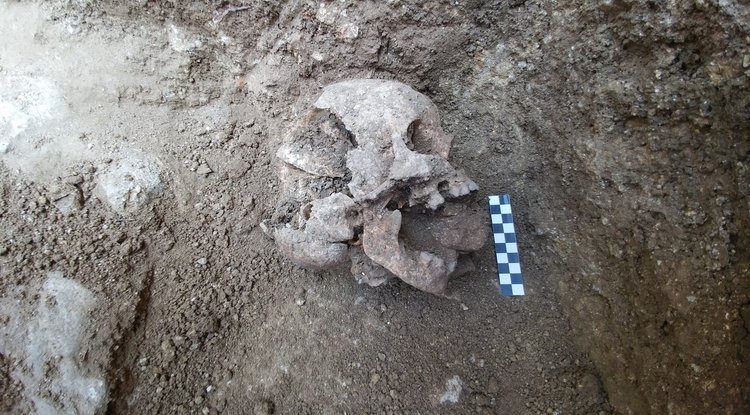 A rock was inserted into the mouth of a 10-year-old to keep the deceased child from rising from the grave and spreading malaria, researchers believe. (Photo courtesy of David Pickel/Stanford University)

The so-called "vampire burial" was found over the summer in the commune of Lugnano in Teverina in the Italian region of Umbria, where UA archaeologist David Soren has overseen archaeological excavations since 1987.

"I've never seen anything like it. It's extremely eerie and weird," Soren, a Regents' Professor in the UA School of Anthropology and Department of Religious Studies and Classics, said in a press release.

"Locally, they're calling it the 'Vampire of Lugnano.'"

The discovery was made at La Necropoli dei Bambini, or the Cemetery of the Babies, which dates to the mid-fifth century when a deadly malaria outbreak swept the area, killing many vulnerable babies and small children. The bodies of the young victims were buried at the site of an abandoned Roman villa that was originally constructed at the end of the first century B.C.

Until now, archaeologists believed the cemetery was designated specifically for infants, toddlers and unborn fetuses; in previous excavations of more than 50 burials, a 3-year-old girl was the oldest child found.

The discovery of the 10-year-old, whose age was determined based on dental development but whose sex is unknown, suggests that the cemetery may have been used for older children as well, said bioarcheologist Jordan Wilson, a UA doctoral student in anthropology who analyzed the skeletal remains in Italy.

"There are still sections of the cemetery that we haven't excavated yet, so we don't know if we'll find other older kids," Wilson said.

In previous excavations at the Cemetery of the Babies, archaeologists found infant and toddler bones alongside items like raven talons, toad bones, bronze cauldrons filled with ash and the remains of puppies that appear to have been sacrificed — all objects commonly associated with witchcraft and magic. In addition, the body of the 3-year-old girl had stones weighing down her hands and feet — a practice used by different cultures throughout history to keep the deceased in their graves. 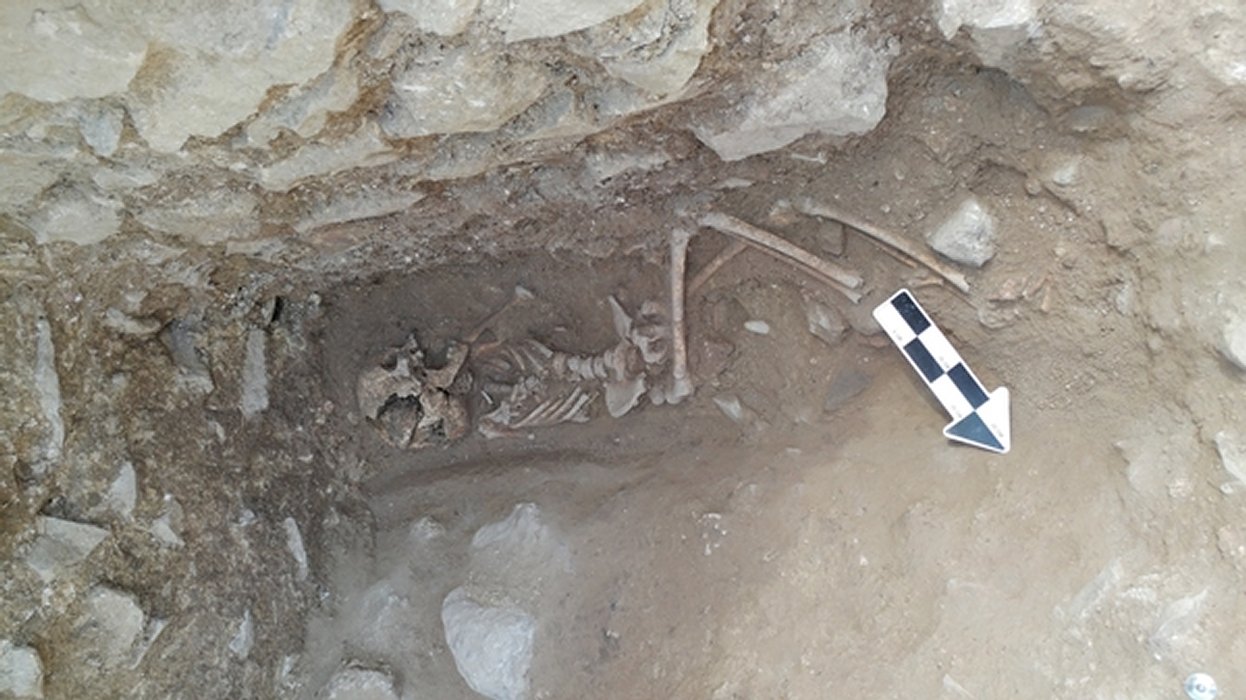 The 10-year-old was discovered lying on its side in a fifth-century Italian cemetery previously believed to be designated for babies, toddlers and unborn fetuses. (Photo courtesy of David Pickel/Stanford University)

"We know that the Romans were very much concerned with this and would even go to the extent of employing witchcraft to keep the evil — whatever is contaminating the body — from coming out," Soren said.

"The "evil," in the case of the babies and toddlers uncovered in Lugnano, was malaria and DNA testing of several of the excavated bones supported his theory."

The child was one of five new burials uncovered at the cemetery over the summer. The body was found lying on its left side in a makeshift tomb created by two large roof tiles propped against a wall — an alla cappuccina-style burial typical of Roman Italy.

"Given the age of this child and its unique deposition, with the stone placed within his or her mouth, it represents, at the moment, an anomaly within an already abnormal cemetery," Excavation director David Pickel said. "This just further highlights how unique the infant — or now, rather, child — cemetery at Lugnano is."

"Knowing that two large roof tiles were used for this burial, I was expecting something unique to be found inside, perhaps a 'double-inhumation' — not uncommon for this cemetery — where a single burial contains two individuals," Pickel said. "After removing the roof tiles, however, it became immediately clear to us that we were dealing with an older individual."

The open position of the child's jaw, which would not have opened naturally during decomposition with the body positioned on its side, suggests that the rock was intentionally inserted in the mouth after death, Wilson said. Teeth marks on the surface of the stone provide further evidence that it was placed purposefully.

Similar burials (associated with a belief that the dead could rise again) have been documented in other locations, including in Venice, where an elderly 16th-century woman dubbed the "Vampire of Venice" was found with a brick in her mouth in 2009. In Northamptonshire, England, in 2017, an adult male from the third or fourth century was found buried facedown with his tongue removed and replaced with a stone.

"This is a very unusual mortuary treatment that you see in various forms in different cultures, especially in the Roman world, that could indicate there was a fear that this person might come back from the dead and try to spread disease to the living," Wilson said.

"It's a very human thing to have complicated feelings about the dead and wonder if that's really the end," Wilson added. "Anytime you can look at burials, they're significant because they provide a window into ancient minds. We have a saying in bioarchaeology: 'The dead don’t bury themselves.' We can tell a lot about people's beliefs and hopes and by the way they treat the dead."