AncientPages.com - On November 19, 1703, “the man in the iron mask” died in the Bastille, Paris, France. He was buried under the name of “Marchioly” and his age was given "about 45."

He was a political prisoner during the reign of Louis XIV of France (1643–1715) and he was famous in French history and legend. 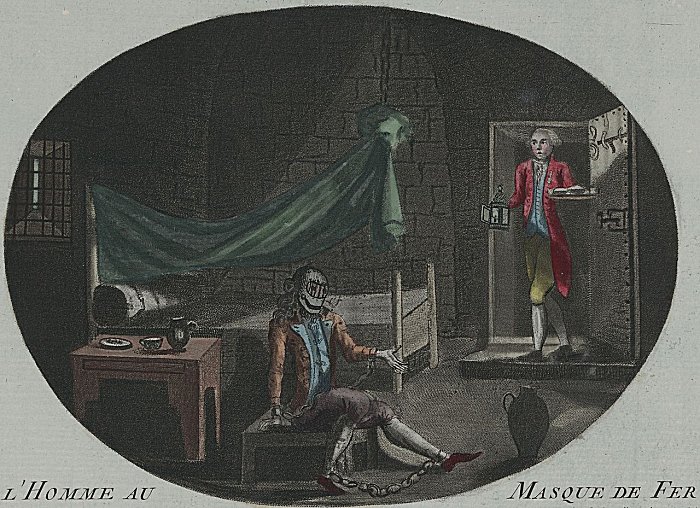 The Man in the Iron Mask, etching and mezzotint, 1789. Library of Congress, Washington, D.C.

There is no historical evidence that the mask was made of anything but black velvet (velours), and only afterward did legend convert its material into iron. His captors told to treat him with respect but to kill him the moment he tries to talk of his identity.

The mysterious man was arrested in 1669 or 1670 and subsequently held in several French prisons, including the Bastille and the Fortress of Pignerol (modern Pinerolo, Italy).

According to recent research, his name might have been "Eustache Dauger", but this still has not been completely proven.

The identity of the man in the mask was already a mystery before his death. Many different suggestions have been proposed. However, only two prisoners were in custody during the same period of time as the “man in the iron mask": Ercole Matthiole and Eustache Dauger.

Matthiole was an Italian count who was abducted and jailed after he tried to double-cross Louis XIV during political negotiations in the late-1670s. He was a longtime prisoner, and his name is similar to “Marchioly”—the alias under which the Mask was buried.

It is generally agreed, however, that Matthioli died in the Îles Sainte-Marguerite in April 1694. The second, even more, convincing candidate was Eustache Dauger, a valet, who was arrested on his orders for an unknown reason near Dunkirk in July 1669.

Based on the correspondence of Louis XIV's minister Louvois, jailers were instructed to restrict Dauger's contact with others and to “threaten him with death if he speaks one word except about his actual needs.”

Dauger was frequently transported from one prison to another and for some reason, the precaution of the mask was necessary to keep the absolute secrecy regarding this person.

It is still unclear who the mysterious man was and if his name was a pseudonym; it was suggested that he was a failed assassin,  the twin brother of Louis XIV, and a man involved in a political scandal.