Jan Bartek - AncientPages.com - Researcher and GRS Radioisotopes technician Jorge Rivera, from the University of Seville, has participated in an incredible discovery that is unique in Europe. After applying an optically-stimulated luminescence technique at the Center for Research, Technology and Innovation laboratories at the University of Seville (CITIUS) and at CENIEH to hominin footprints found at Matalascañas in 2020, Rivera helped to determine that the footprints are in fact 200,000 years older than previously suspected. 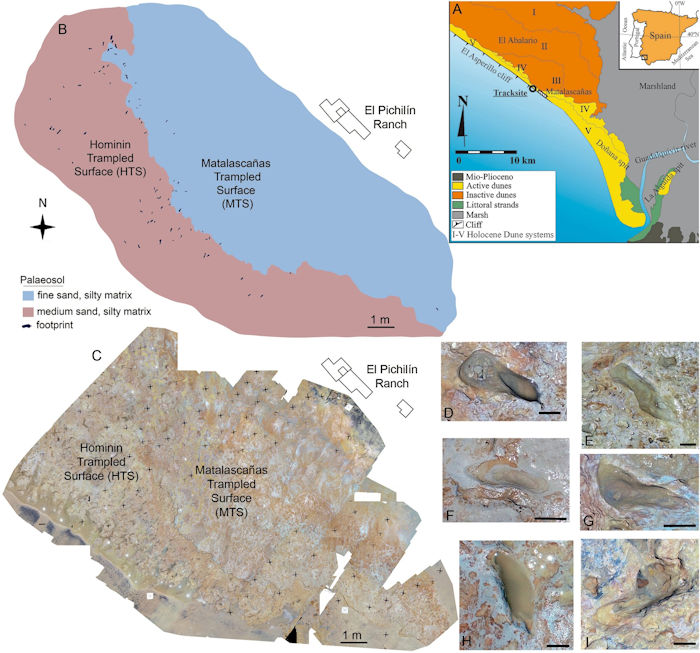 This would mean that pre-Neanderthals would have lived in the Doñana area during the Middle Pleistocene, around 295,800 years ago. To obtain this result, the team used optically-stimulated luminescence, a method used to find the absolute age of sediments that have been fully exposed to sunlight.

The research, led by Professor of Paleontology Eduardo Mayoral at the University of Huelva was published by Scientific Reports, on October 19, 2022.

The discovery in June 2020 of hominin footprints more than 106,000 years old next to El Asperillo (Matalascañas, Huelva) was a revolution for the scientific world, so much so that it was considered one of the most important discoveries of that year. But now, the publication of this new paper has confirmed what some experts suspected at the time: those footprints were much older and are in fact 200,000 years older than previously thought. While it was previously placed in the Upper Pleistocene, the evidence now points clearly to the Middle Pleistocene, and to its being 295,800 years old, making it a unique record in Europe, since there is no better site in the world for hominin fossil footprints in terms of number, age and area than that of the El Asperillo beach.

After collecting samples from the various levels, and another two later to compare the first results, the age of the fossil remains was established and points to the Middle Pleistocene, a crucial moment between different climatic stages, between a warm period, MIS 9 (360,000-300,000 years ago), in transition to MIS 8 (300,000-240,000 years ago), in which a major glaciation took place.

The age is thus specified at 295,800 years, with a margin of error of 17,800 years, according to the data collected from the four samples of sedimentary levels in the cliffs of El Asperillo where the site was found, initially 87 footprints, which now has a record of more than 300 footprints, of which 10% are considered well-preserved. With the exception of those from Matalascañas, it is noted that no other hominin footprints are known between the climatic stages MIS9 and MIS 8 of the Middle Pleistocene. That is why it is uncertain whether the footprints came from Neanderthals.

But did the footprints come from Neanderthals?

At first the footprints were thought to be from Neanderthals, but that is now in doubt. The main hypothesis among the scientists is that the footprints came from individuals of the Neanderthal lineage, with which Homo heidelbergensis and Homo neanderthalensis have been associated. The hypothesis that the prints belonged to pre-Neanderthal hominins is feasible. Precisely for this reason, the Matalascañas footprints are now more valuable due to their contribution to the fossil records of hominins in the Middle Pleistocene, which is very poor in Europe because of the scarcity of deposits with footprints.

Until now, according to the Scientific Reports paper, footprints this period have only been found at Terra Amata and Roccamonfina (Italy), and were dated to between 380,000 and 345,000 years ago, with records of Homo heidelbergensis. They are the only ones older than those at Huelva in this era. After these, findings at the Biache-Vaast (France) and Theopetra (Greece) sites, from 236,000 to 130,000 years ago, are attributed to Homo neanderthalensis. In this context, the length range of all the footprints found at Matalascañas, from 14 to 29 centimeters, is similar to that found at European sites, such as Theopetra (14-15 centimeters), Roccamonfina (24-27 cm) and Terra Amata (24 cm).

In any case, the experts highlight the singularity of the Matalascañas discovery, whose new dating challenges the existing paradigms and has required deep analysis before any conclusions could be accepted. 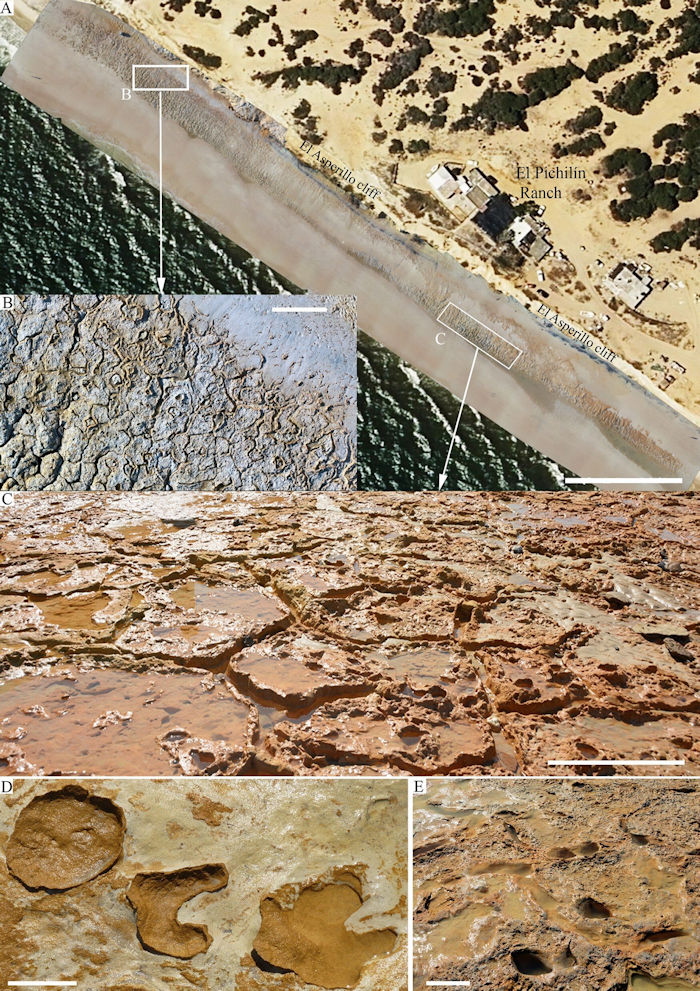 Current intertidal zone in the area surrounding El Pichilín, Castilla beach, Matalascañas. (A) General view of the cut-wave platform. Scale bar: 50 m. The polygonal mats with upturned margins of individual polygons show an extensive open cracks network resulting in the saucer-shaped polygons. Locally, subcircular openings with upturned and curled margins of the thin mat can also be seen. (B) Detail of the NW sector. Scale bar: 2 m. (C) Detail of the SE sector. Scale bar: 1 m. (D) Cervipeda and undetermined tracks were preserving remains of the microbial mat trapped under their footprints. Scale bar: 8 cm. (E) Hominin footprints preserved on the polygonal mats. Scale bar: 20 cm. The photogrammetric orthomosaic (A) was produced using Pix4DMapper© (versión PIX 4D Cloud). (A) was obtained by a low-altitude programmed flight using an Unmanned Aerial Vehicle (UAV) on June the 12ht, 2020, 12 AM UTC. Photograph was collected by a multirotor DJI Phantom 4 + with a 4 k 20 Mpix RGB CMOS camera at an average height of 50 m above the ground. Credit: Scientific Reports (2022). DOI: 10.1038/s41598-022-22524-2

The new chronology now establishes a change in the scenario that then prevailed on the coast of the Gulf of Cádiz, with human settlements in a more temperate and humid climate than in the rest of Europe, with high water tables and abundant vegetation.

In that same period the sea level would have been about 60 meters below its current level. This implies that the coast would be more than 20 kilometers from where it is today, which is how there would have been a great coastal plain, with large flood-prone areas, in which the footprints discovered in mid-2020 would have been made.

The site's new dating also affects the vertebrate animals found, since the hominin traces there also included footprints of large mammals such as straight-tusked elephants, gigantic bulls (aurochs) and boars. It was the fauna that inhabited Doñana 300,000 years ago and not 100,000 years ago, as other investigations stated.

The study was published in Scientific Reports