Jan Bartek - AncientPages.com - Between 18 million and 12 million years ago, the Great Plains supported an unprecedented variety of hooved mammal species that browsed on leafy vegetation—up to three times more than in any modern ecosystem, including the densest rainforests. That diversity, ecologists figured, could only have emerged in a landscape similarly blanketed with woody, foliage-rich vegetation that employed a form of photosynthesis, C3, favored by roughly 85% of plant species.

But some recent studies have hinted that the Great Plains may actually have featured more open, savanna-like swaths topped by grasses that would later come to dominate the region. Those grasses evolved a water-saving form of photosynthesis known as C4. 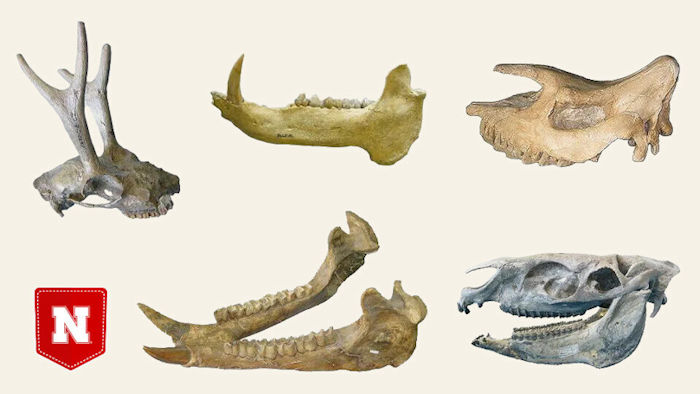 A collection of fossils, including teeth, from hooved mammal species that resided in Nebraska between 18 million and 12 million years ago. Credit: University of Nebraska State Museum

Nebraska's Willow Nguy and Ross Secord sought to clarify the confusion by turning to teeth—specifically, the amount of a particular carbon atom, or isotope, found in the enamel of fossilized choppers. The C3 and C4 plants produce differing amounts of the carbon-13 isotope, which accumulates and is preserved in the enamel of herbivores consuming those plants. That enamel becomes a mineralized record of the vegetation covering a landscape millions of year ago.

After analyzing the enamel of 183 teeth from a representative sample of extinct mammal species, Nguy and Secord concluded that the Nebraska of 18 million to 12 million years ago resembled a fairly dry savanna or woodland peppered with denser forests. Carbon-13 concentrations and the sheer variety of hooved mammal species suggests that even those open expanses featured more flowering, leafy plants than the grassland-rich Nebraska of today, the researchers said. Still, a year-round growing season may have allowed some species to subsist on sparser vegetation.

The study is published in Palaeogeography, Palaeoclimatology, Palaeoecology. Refining the model that informed the team's estimates could help reconcile a disparity between the amount of C4 grasses on ancient landscapes and the surprisingly limited consumption of that vegetation, Nguy said.