Jan Bartek - AncientPages.com - A new study from The Australian National University (ANU) has revealed the death rate of babies in ancient societies is not a reflection of poor healthcare, disease and other factors, but instead is an indication of the number of babies born in that era.

The findings shed new light on the history of our ancestors and debunk old assumptions that infant mortality rates were consistently high in ancient populations. 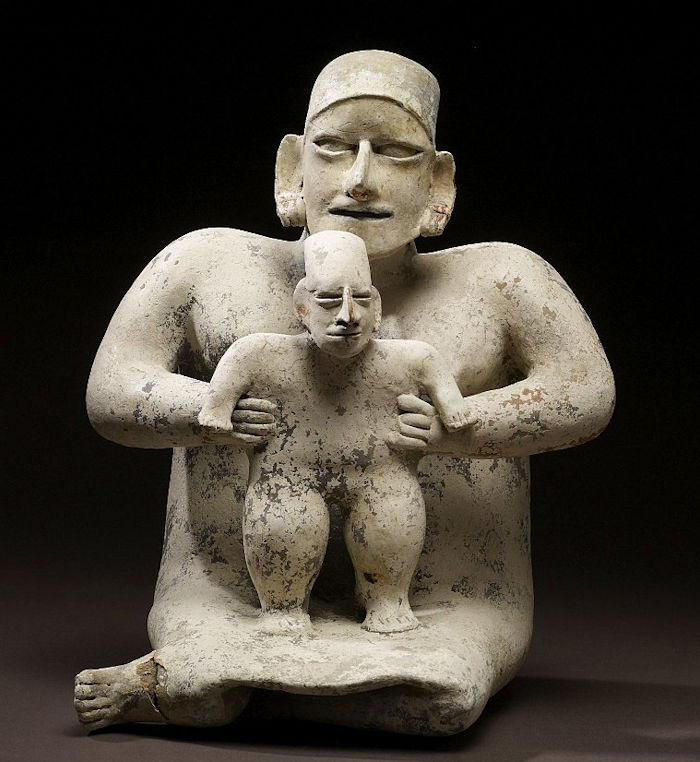 A mother proudly supports her male child who, with her help, stands securely on her lap. She sits in the proper position for women: legs folded to the side and concealed below her wrap skirt. This cream-slipped sculpture was made during the culmination of the shaft tomb tradition in West Mexico, when tombs were filled with spirited figural sculptures and decorated pottery vessels, and the bodies of the deceased were dressed in fine clothing and jewelry of shell and stone.  Credit: Gift of John Bourne - Walters Art Museum - Public Domain

The study also opens up the possibility mothers from early human societies may have been much more capable of caring for their children than previously thought.

"It has long been assumed that if there are a lot of deceased babies in a burial sample, then infant mortality must have been high," lead author Dr. Clare McFadden, from the ANU School of Archaeology and Anthropology, said.

"Many have assumed that infant mortality was very high in the past in the absence of modern healthcare.

The researchers examined United Nations (UN) data from the past decade for 97 countries that looked at infant mortality, fertility and the number of deaths that occurred during infancy. The analysis revealed that fertility had a much greater influence on the proportion of deceased infants than the infant mortality rate.

Because there is very little known about early human societies, the UN data helped the researchers make interpretations about humans from the past 10,000 years.

"Archaeology has often looked at the proportion of deceased infants to learn something about infant mortality. There was an assumption that nearly half, 40 percent, of all babies born in prehistoric populations died within the first year of their lives," Dr. McFadden said.

After analyzing the UN data, Dr. McFadden found no evidence to support this assumption.

"If mothers during that time were having a lot of babies, then it seems reasonable to suggest they were capable of caring for their young children."

The ANU findings could help researchers understand more about humans that inhabited the Earth tens of thousands of years ago and in particular, how mothers in ancient societies cared for and interacted with their children.

Dr. McFadden said as we piece together more clues about the history of humans, it's important we "bring some humanity" back to our ancestors.

"Artistic representations and popular culture tend to view our ancestors as these archaic and incapable people, and we forget their emotional experience and responses such as the desire to provide care and feelings of grief date back tens of thousands of years, so adding this emotional and empathetic aspect to the human narrative is really important," she said.

The researchers would also like to see greater emphasis placed on the stories of women in past populations, which they say have long been neglected in favor of male stories.

"We hear a lot of stories about conflict involving males and even narratives around colonization and expansion of populations tend to have a focus on men and I think it's really important to be telling these stories of women in the past and what the female experience was like, including the roles they played in the community and as a mother," Dr. McFadden said.

"We hope that further research, applied with the lens of our findings, will add to our understanding of infant care and motherhood in the past."