Jan Bartek - AncientPages.com - Widely recognized as one of the most influential scientists of all time and a key figure in the scientific revolution Isaac Newton was also very interested in the occult. He became a vivid student of mysticism and his interest in alchemy and theology has been documented.

We may think we know who Isaac Newton was, but our knowledge about this great man’s thoughts and ideas is still incomplete. 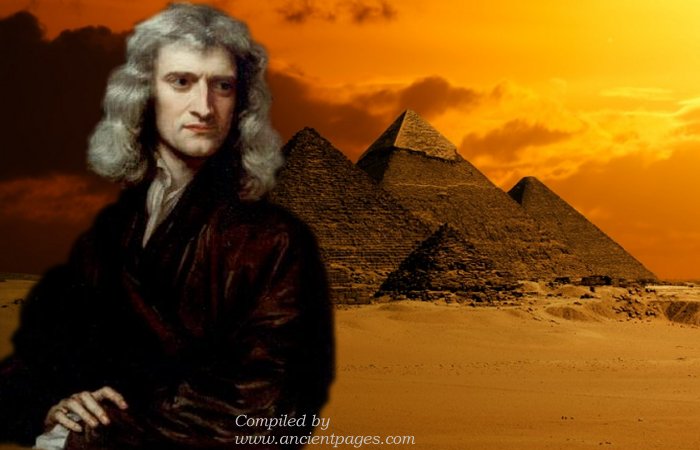 Last month it was announced previously uncounted copies of Isaac Newton's groundbreaking science book Philosophiae Naturalis Principia Mathematica, known as the 'Principia' have been found by a Caltech historian and his former student.

By analyzing ownership marks and notes scribbled in the margins of some of the books, in addition to related letters and other documents, the researchers found evidence that the Principia, once thought to be reserved for only a select group of expert mathematicians, was more widely read and comprehended than previously thought.

Newton had many secrets and now we are told his unpublished notes reveal he made attempts to unlock codes hidden in the Bible. The unpublished notes thought to have been written in the 1680s and only discovered 200 years after Newton's death, are now being sold by Sotheby's.

These old documents reveal Newton was convinced the ancient Egyptian pyramids held key to the apocalypse.

Following criticism of his work by his rival Robert Hooke of the Royal Society, Newton started to study the pyramids in the 1680s, during a period of self-imposed scholarly exile at Woolsthorpe Manor in Lincolnshire, away from his base at Cambridge University

Newton had a special interest in the pyramids because he came to believe these ancient structures could help him confirm his theory of gravity. In addition to this, he also thought that by finding out how the pyramids were made he would unlock other secrets about the world.

One of his goals was to figure out the unit of measurement the ancient Egyptians used while making the pyramids. Ancient attempts to calculate the circumference of the Earth had been made before and without access to modern technology two scientists almost go the number right.

“Newton believed it likely that the ancients had been able to measure the Earth using techniques lost to modern man. The figures given by Eratosthenes did not fit Newton’s propositions for gravitational attraction, so he turned to the earlier figure given by Thales and Anaximander in the 6th century BCE, which was that the Earth’s circumference was 400,000 ‘stades’,” said the auction house Sotheby’s. 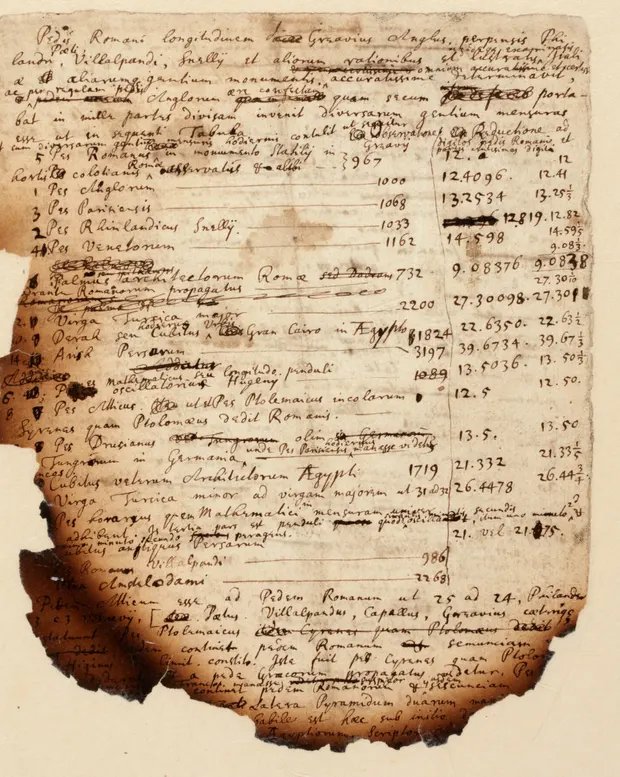 It’s still possible to read from his notes even if the papers appear burnt around the edges, which allegedly happened after his dog, Diamond, jumped onto a table and tipped over a candle.

“These are really fascinating papers because in them you can see Newton trying to work out the secrets of the pyramids,” Gabriel Heaton, Sotheby’s manuscript specialist, told the Observer. “It’s a wonderful confluence of bringing together Newton and these great objects from classical antiquity which have fascinated people for thousands of years. The papers take you remarkably quickly straight to the heart of a number of the deepest questions Newton was investigating.”

As The Guardian reports, Isaac Newton “hoped that would lead him to other ancient measures, allowing him to uncover the architecture and dimensions of the Temple of Solomon – the setting of the apocalypse – and interpret the Bible’s hidden meanings.

“He was trying to find proof for his theory of gravitation, but in addition, the ancient Egyptians were thought to have held the secrets of alchemy that have since been lost,” said Heaton. “Today, these seem disparate areas of study – but they didn’t seem that way to Newton in the 17th century.”

Newton kept his obsession with alchemy and his heterodox religious beliefs – a rejection of the doctrine of the Trinity – to himself. This was not because he feared his faith might discredit his scientific work or vice versa, but because his unorthodox views would cost him his career.”

Newton was certainly not the only scientist who was interested in alchemy. Paracelsus (1493 - 1541),  one of the most influential medical scientists in early modern Europe wrote over ten thousand pages devoted to surgery, alchemy, astrology, and theology. As explained earlier, alchemy was a richly symbolic medieval science (forerunner of chemistry) that combined practical discoveries of alchemists with a mystical view of nature.

“The idea of science being an alternative to religion is a modern set of thoughts. Newton would not have believed that his scientific work could undermine religious belief. He was not trying to disprove Christianity – this is a man who spent a long time trying to establish the likely time period for the biblical apocalypse. That’s why he was so interested in the pyramids,” Heaton said.

Newton’s “exceptionally rare” unpublished manuscripts were sold for  £380,000 at Sotheby’s auction this Tuesday.