Jan Bartek - AncientPages.com - A man who was out searching for mushrooms in the Jesenicko district of Northern Moravia, Czech Republic made a startling discovery.

To his great astonishment, Roman Novák suddenly spotted something strange beneath the stones. As he looked closer, he unearthed this rare and magnificent 3,300-year-old sword! 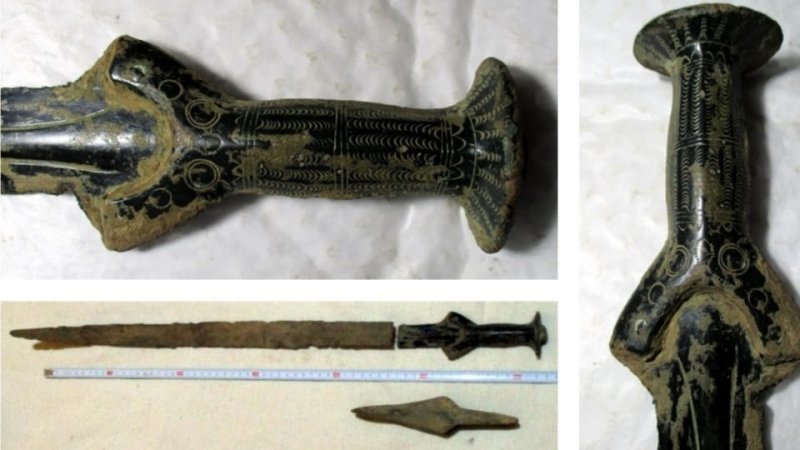 “It had just rained and I went mushroom-picking. As I went, I saw a piece of metal sticking out of some stones. I kicked it and found that it was a blade, part of a sword. I then dug some more to find a bronze axe,” Novák said.

He immediately contacted archaeologists who came and conducted several tests of the ground and the artifact. The results show what Novák accidentally discovered is truly extraordinary.

According to Jiří Juchelka, who leads the archaeology department at the nearby Silesian Museum, both the sword and axe date back to around 1,300 BC and resemble weapons used mainly in the area of what is today Northern Germany.

Finding ancient swords in Europe happens from time to time, but not so often. Though it should be added that just recently, archaeologists from East Bohemia unearthed a unique 2,000-year-old Celtic sword in the village of Ceské Lhotice near the town of Chrudim in the Pardubice Region of the Czech Republic.

The Sword Was Not Used In Battle - It Had Symbolic Value

The sword found by Novák is much older and “experts say they were surprised to find such a sword in the Jesenicko area, because, at the time, it was sparsely populated. However, tests on the soil show that it is indeed local,” Radio Prague reports.

The sword most likely belonged to a member of the Urnfield culture, a late Bronze Age culture of central Europe. The name comes from the custom of cremating the dead and placing their ashes in urns which were then buried in fields.

Swords were very costly so this must have been an expensive commodity in this part of Europe 3,300 years ago when the Urnfield culture was just getting started in this region. Unlike with later iron swords which required the smith to hammer the red hot metal into shape, bronze swords were made by smelting bronze until it turned into liquid metal and then pouring it into a mould.

“They were obviously trying their best, but the quality of the casting was actually pretty low. X-ray tests show that there are many small bubbles inside the weapon. This suggests that the sword was not used in combat, but was instead of symbolic value,” Juchelka told Radio Prague.

This amazing discovery has encouraged scientists to conduct an archaeological survey of the area where the sword was found. Could there be more similar weapons buried in the vicinity or perhaps some precious ancient artifacts that can tell us more about the people who lived in this region?

May we even with some luck learn whom this 3,300-year-old sword belonged to? There are many unanswered questions and that’s what makes the planned archaeological excavations so exciting.

“It is like a puzzle. We just have four little shards from the story that took place right now, so we have to start piecing everything together,” Juchelka said.

While archaeologists prepare the dig in Jesenicko, the unearthed sword will now be taken to the Silesian Museum where several experts will analyze it. When this has been done, this rare artifact will be exhibited in both the Ethnographic Museum of Jesenicko and the Silesian Museum.