A. Sutherland  - AncientPages.com - Africa contains many nationalities and a large variety of legends. Every nation has many beliefs that have been handed down from one generation to the next since the distant past.

The most interesting character in Zulu mythology is Tokoloshe or Tikdoshe, a mischievous and evil spirit that feeds on the spiritual energy of its victims. 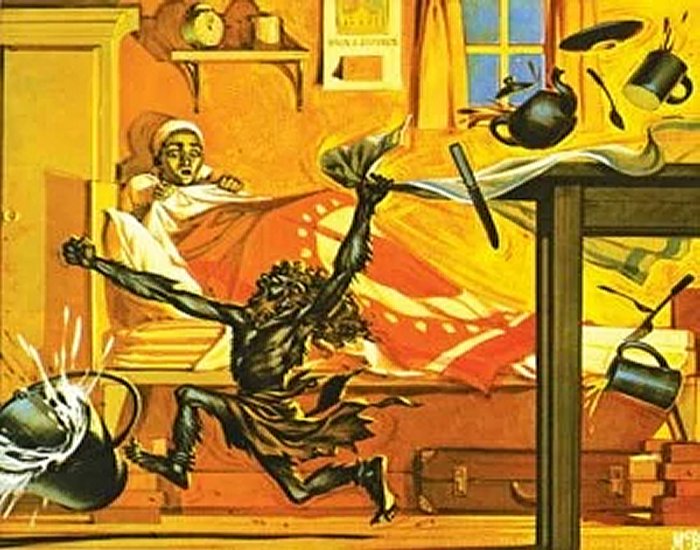 It took time but eventually, it was realized that anyone who happened to be sleeping in an elevated position escaped the deadly curse of this evil spirit. Image credit: Angus McBride for Finding Out, Volume 16 Issue # 11

If necessary, these 'little spirits' or 'little devils' can become invisible through the use of a magic stone that they carry inside their mouth, or by swallowing a stone or drinking water. They also have the ability to disguise themselves as a bird or a small bear but this is not passed down in all stories.

There are many myths about this nasty river-dweller and the Zulu people describe it in different ways giving us many versions of the Tokoloshe stories.

Generally, the Tokoloshe is a terrifying dwarf-like creature only 20-30 cm tall with huge ears, head of man, red eyes, long and sharp claws, and a body covered with hair.

The Tokoloshe may represent a mix of a gremlin, zombie, and poltergeist. Tradition tells it is a work of a sorcerer whose intent is always evil and his practice is based on malevolent magic. In this case, the sorcerer used human corpses to seek vengeance on those who once attacked him.

Usually, the Tokoloshe can only be seen by children, towards whom it shows kindness and often builds a friendship. Apparently the creature does not trust adults and likes to fight them. Losing against Tokoloshe can mean death for a human, but victory can give a man great magical powers.

One version says that this being can be malevolent and dangerous also toward children by scaring them, often leaving long scratches on their bodies.

How To Sleep At Night Undisturbed?

The creature is very troublesome because it usually attacks at night by biting the toes of the person who is already sleeping or just try to get a restful night's sleep. Aware of the creature's small size, the Zulu people used to sleep with their beds raised off the floor.

One way to protect you from this 'little devil' is to place a bed on bricks covered with for example... newspapers.

It took time but eventually, it was realized that anyone who happened to be sleeping in an elevated position escaped the deadly curse of this evil spirit.

Tokoloshe Feeds On Spiritual Energy Of Its Victim

Wicked and evil, the Tokoloshe is making fun of someone or something in a cruel way. As several other mythological evil creatures do, the Tokoloshe does not ingest the blood of their victims but feeds on the spiritual energy of each one of them.

This kind of behavior suggests the creature is more like a spiritual monster.

Among the tribes in Africa, especially in South Africa, in the regions of Zimbabwe, Botswana, and surroundings, the Tokoloshe has a diabolical nature.

The modern Tokoloshe is more like a trickster creature capable of scaring, joking evil, or showing a very foolish behavior in another way. In African mythology, there are many tricksters; one is Eshu in beliefs of the Yoruba people of present-day Nigeria. He is the magician and troublemaker known for his various disguises and unpleasant mischief; another is Anansi widely known in West Africa.

Man Who Was Bewitched By Tikoloshe And Became A Murderer

One day a woman came to the shore and saw Tikoloshe floating in the river.  The woman took some water and headed home and Tikoloshe followed her and even helped to bring a bundle of firewood. The woman's husband returned home and found his wife in Tikoloshe's arms. He tried to attack the creature but suddenly found himself on the floor. In a rage, he rushed at his wife and killed her. While standing and looking at the lifeless body of his wife, the poor man felt remorse for his actions.

The creature was still there and suddenly jumped off and landed directly on the shoulders of the man. This sudden close contact made the man completely at the mercy of the monster and now, the man did everything that it commanded.

Unkulunkulu: ‘Great Oldest One’ Progenitor Of Mankind, Creator Of All Things And Origin Of Death In Beliefs Of Zulu People

Eshu The Trickster: Mischievous Mediator Between Heaven And Earth In Beliefs Of Yoruba People

From that day on, the residents of the district began a tough life, witnessing a series of brutal murders that were committed in the area. Most of the victims were women but also several rich men suffered. The reason for these mysterious, unexplained killings was unknown, but many believed that the killer was most probably seduced by their money. Although the atrocities were committed in broad daylight, no one saw the killer or any other suspicious person. This went on for a long time.

One day a young man, approaching his house, noticed a shadow slipping out of the door. He suspected something was wrong but didn't show it. The next day, he told his wife to pack his things, saying that he had decided to go to a distant land to earn money and would not return soon. He said goodbye to his wife and left. In the middle of the night, he crept up to the hut and opened the door softly, holding a knife ready in his hand. As he had expected, his wife was not alone, but in the arms of Tikoloshe. The young man stabbed the monster with all his strength and killed it on the spot. And then, he took his wife to her parents, where he told his father-in-law about what had happened and ended with these words:

"Your daughter is no longer my wife.

The father-in-law, without a word, returned to the son-in-law the cattle received as a ransom for the daughter.