Conny Waters - AncientPages.com - Monkeys appear in Grecian frescoes dating back to the Bronze Age 3,600 years ago, but monkeys are not native to Greece or the Aegean isles. Why are these animals present in artwork, and why are some of them blue?  One can assume the artists most likely never actually encountered the animal they depicted or did they?

According to a new study, artists actually saw these monkeys in Grecian frescoes. If they didn’t then they must have talked to someone who described the animals in great detail, because the depictions are so accurate that researchers can identify the monkeys. 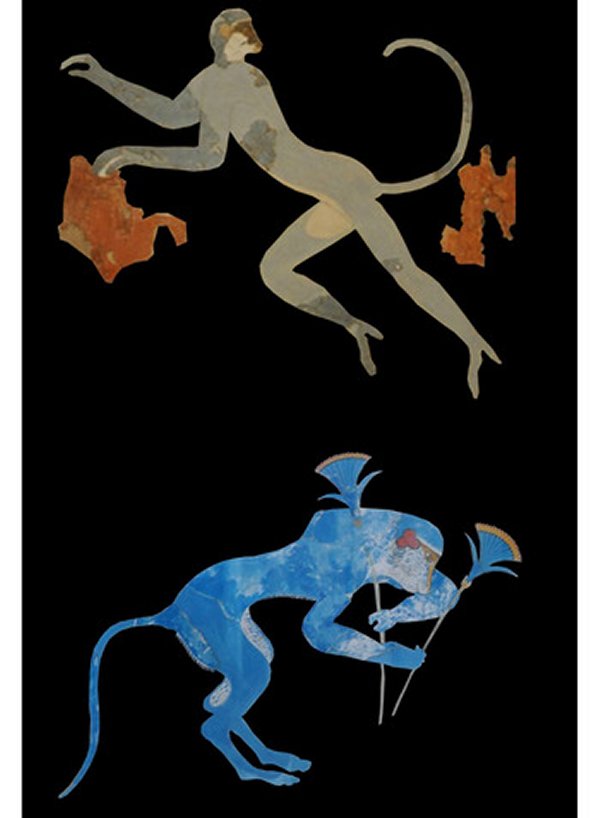 Two cercopithecids in Minoan frescoes: top) vervet monkey depicted in a fresco at Akrotiri, Thera; below) baboon shown in a fresco at Knossos, Crete. Credit: B. Urbani.

Scientists who re-examined evidence from frescoes, seals, pendants, figurines, and jewelry say there was an early exchange of iconography and knowledge of monkeys between the Aegean and North Africa.

The frescoes at Akrotiri, Thera, and Knossos, Crete, strongly suggest that Minoans were familiar with two species of cercopithecid monkeys and baboons.

Researchers have identified portable objects that resemble baboons in this Bronze Age society. Both primate groups were probably originally represented at Minoan sites after having been observed on the African mainland. There is alleged archaeological evidence for the presence of Minoans in North Africa, from the site of Avaris, present-day Tell el-Dab'a, in Egypt.

Vervet monkeys are represented in Thera and are depicted in a landscape context. On the other hand, baboons seem to be related to sacred contexts and are associated with flower offerings or gathering, as well as using swords and playing music on lyre-like instruments at Thera and Crete (Knossos).

In their study, scientists explain that in Minoan imagery, particular monkeys seem to be distinctly related to certain contexts.

Sophisticated Lenses Of Minoans Discovered In The Sacred Idaion Cave

The small-bodied, agile and naturalistically represented vervet monkeys were most often associated with leisure activities. Whereas the larger, sturdier, more terrestrial baboons—monkeys that were already deified in nearby Egypt were attributed more anthropomorphic behaviors and depicted in sacred or ritual events.

This Aegean Bronze Age society, then, was the first European civilization to perceive, represent, socially construct and, eventually, have contact with non-human primates. The representation of primates in Minoan contexts confirms the early exchange of iconography and knowledge of monkeys among Aegean islanders, and substantiates their interaction with human populations from North Africa that might have had these primate species living around their coastal settlements.

The color of the pelages (hair) of both baboons and vervets falls within the grey/olive-grey range, but they are consistently represented as blue in Minoan frescoes.“

Based on the observations it seems that in other societies the use of blue to represent Minoan monkeys might be explained as a color abstraction within the grey/green scale.

In this way, vervets and baboons represent ideal living models for an iconographic and chromatic hypothesis in which grey/green is represented by blue. In fact, blue was also used by Minoans to represent metallic, grey-like surfaces such as fish scales.

Moreover, the color blue was widely and symbolically used by Egyptians in divine contexts Minoans may have borrowed it to represent exotic animals, such as monkeys.