Conny Waters - AncientPages.com - People in Ethiopia did not live in low valleys during the last ice age. Instead they lived high up in the inhospitable Bale Mountains, according to a new study.

Researchers provide the first evidence that our African ancestors had already settled in the mountains during the Palaeolithic period, about 45,000 years ago. 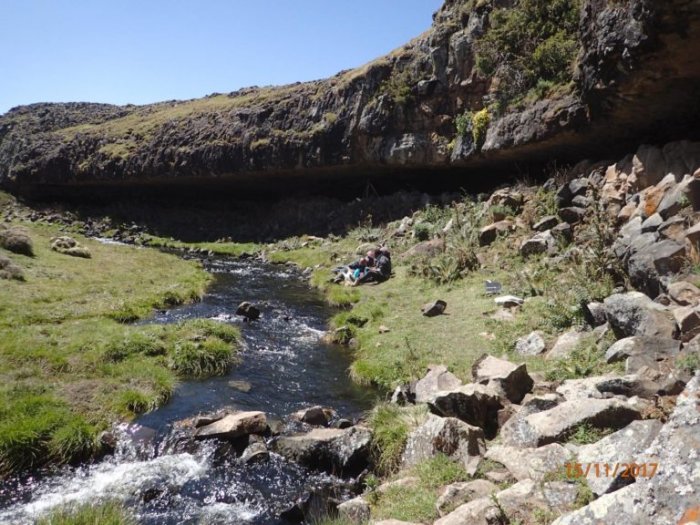 The Fincha Habera rock shelter in the Ethiopian Bale Mountains served as a residence for prehistoric hunter-gatherers. Image: Götz Ossendorf

At around 4,000 meters above sea level, there is a low level of oxygen in the air, temperatures fluctuate sharply, and it rains a lot, but these ancient people had enough water, built tools out of obsidian and relied mainly on giant rodents for nourishment.

The lower valleys were already too dry for survival.

"Because of these adverse living conditions, it was previously assumed that humans settled in the Afro-Alpine region only very lately and for short periods of time," says Professor Bruno Glaser, an expert in soil biogeochemistry at Martin Luther University Halle-Wittenberg (MLU).

The researchers investigated a rocky outcrop near the settlement of Fincha Habera in the Bale Mountains in southern Ethiopia. During their field campaigns, the scientists found a number of stone artefacts, clay fragments and a glass bead.

"We also extracted information from the soil as part of our subproject," Glaser added in a press release.

The scientists also developed a new type of palaeothermometer which could be used to roughly track the weather in the region - including temperature, humidity and precipitation.

The analyses may also have uncovered the reasons for this: during the last ice age the settlement of Fincha Habera was located beyond the edge of the glaciers.

People ate giant mole rats, endemic rodents and these animals were easy to hunt and provided enough meat, thereby providing the energy required to survive in the rough terrain. Humans probably also settled in the area because there was deposit of volcanic obsidian rock nearby from which they could mine obsidian and make tools out of it.

"The settlement was therefore not only comparatively habitable, but also practical," concludes Glaser.

The soil samples also reveal a further detail about the history of the settlement. Starting around 10,000 years before the Common Era, the location was populated by humans for a second time.