Conny Waters - AncientPages.com - In 256 BC, during the First Punic War (264-241 B.C.) one of the greatest naval battles in history took place off the coast of Sicily, Italy.

As many as 330 ancient Roman ships confronted 350 Carthaginian ships. The struggle was long and many lives were lost. The fight between these two huge ancient powers is today known as the Battle Of Cape Ecnomus. 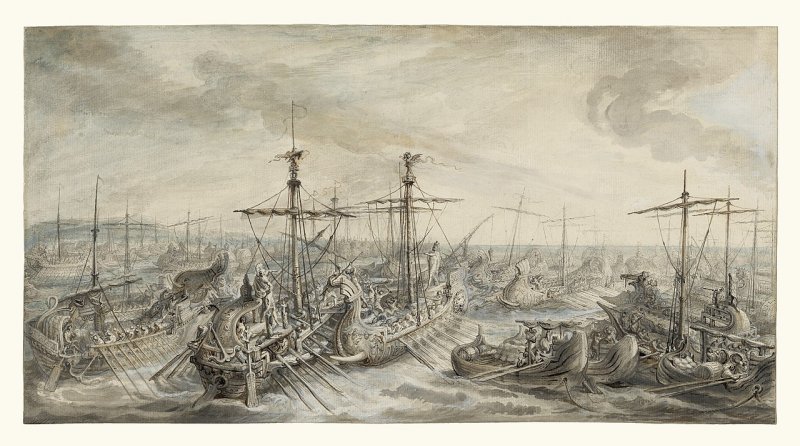 The Naval Battle Near Ecnomus (256 BC) Description of The Roman Fleet Victorious over the Carthaginians at the Battle of Cape Ecnomus; This drawing is one of a series of illustrations Saint-Aubin made in the 1760s for an ambitious history of Rome. Engravings after drawings as well as maps were to accompany this multi-volume series which was never completed. In 1789, twenty-nine engraved plates from Saint-Aubin's drawings illustrated a more modest Roman history. Gabriel de Saint-Aubin - J. Paul Getty Museum - Public Domain

Ancient Romans tried to control the Mediterranean Sea, but they had a great enemy that could not be easily defeated – the Carthaginians.

Carthage was without doubt one of Rome’s toughest adversaries in regard to control of the Mediterranean Sea.

In 256, the Romans sent a fleet of no less than 330 ships from Sicily to Africa, where the army aboard was supposed to strike at the Carthaginian homeland. Before crossing the Mediterranean, it encountered a Carthaginian navy of 350 ships, not far from modern Licata, at Ecnomus, an early third-century city founded by refugees from Gela, The site has been identified at Poggio di Sant' Angelo.

Both sides thought that they fought now on equal terms, and both threw themselves most thoroughly into the task of organizing naval forces and disputing the command of the sea.

Each of the ships had around 300 rowers and 120 combat troops, which adds up to a total of some 300,000 men. Even though they had fewer ships, the Romans won after a long struggle and only suffered around 10,000 casualties while the Carthaginians lost more than 40,000.

The war was not over yet, though. Carthage would stay a formidable archenemy of the Roman Empire for many years to come.

K. Tipps explained that “at least three major questions emerge from the modern controversy over Ecnomus. The first concerns the numbers, both of men and ships, engaged in the battle; the figures provided by Polybius have been manipulated in modern scholarship, and with generally negative effects on our understanding.

The second item in need of correction is the largely skeptical attitude adopted in modern times towards the battle formation of the Roman fleet as described by Polybius. Here again, it is the testimony of Polybius himself that is more persuasive than the arguments of his critics.

The third question concerning the battle is perhaps the most difficult: the action at Ecnomus gives the appearance of having been determined and guided by the Carthaginian commanders, but victory – by a decisive margin – went to Rome. By what means was the comparatively inexperienced Roman fleet able to defeat a Carthaginian force roughly equal and probably slightly superior in size, under conditions that were likewise largely equal and, if anything, favored the Carthaginians? This is the opposite of the result that we would naturally expect, and one that still cries out for explanation. “ 1

According to Tipps, “ the Roman victory at Ecnomus was most directly the result of a serious blunder – not on the part of the Carthaginians, but rather of the Romans themselves, who emerged as accidental victors when their illogical and unpredictable behavior in the opening phase of the action fatally disrupted the tactics prepared by the Punic admirals.“