Conny Waters - AncientPages.com - Theologians, historians, scientists and ordinary people have always speculated about who the Anti-Christ is or will be.

Now, an ancient history professor claims she has unraveled the identity of Anti-Christ and the meaning of number 666. Her suggestions are somewhat surprising because instead of looking into the future she sought the answers in the past. 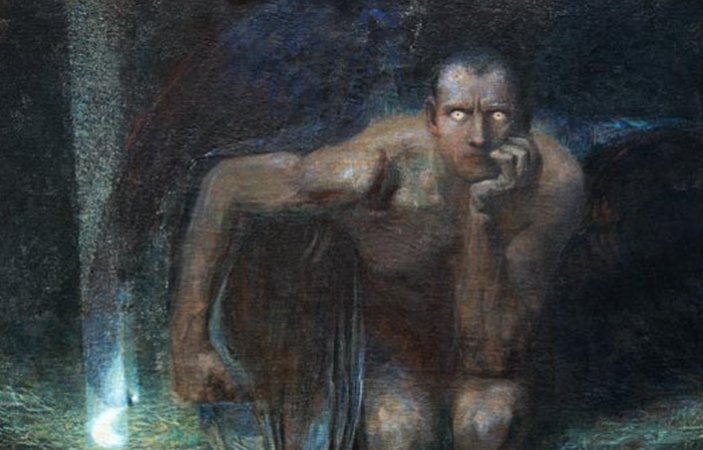 Lucifer (1890) by Franz Stuck. Because of Patristic interpretations of Isaiah 14:12 and Jerome's Latin Vulgate translation, the name "Lucifer" is sometimes used in reference to Satan.  Credit: Public Domain

Professor Kim Haines-Eitzen of Ancient Mediterranean Religions from Cornell University specializes in Early Christianity and early Judaism. She says her research shows we should not be searching for a dragon-like devil that will appear in the future, but rather a historical figure.

In the Book of Revelation, the devil is described as the supernatural ruler of the Roman Empire and the ultimate cause of all evil in the world. The devil is said to be a Great Red Dragon with seven heads, ten horns, seven crowns, and a massive tail.

After having knocked out knocks a third of the Sun, Moon and stars out of the sky, the beast enters heaven and engages in a war with Michael and the Angels. Finally, the Great Red Dragon is defeated and cast into an abyss where he is imprisoned for 1,000 years.

Why Is Roulette Called The Devil’s Game?

How Sæmundur The Wise Tricked The Devil Three Times

Professor Haines-Eitzen thinks the identity of the devil is not as complex as we think. In an interview with Morgan Freeman in his Netflix series “The Story of God”, she said  the Anti-Christ was the Roman Emperor Nero (37 AD – 68 AD).

As Sputnik reports, “according to the scholar, although the final part of the New Testament, detailing the days of the apocalypse, is considered a religious and prophetic book with “loads of symbolism”, it is also “very much a political book”.

“It is making a political claim about the cause of evil, or who is responsible for evil… There is a strong argument to be made for 666 referring to Nero – the emperor of Rome from 54 to 68 AD”, Professor Haines-Eitzen said.

She also explained that if one applies “numerical values to the name Kaiser Neron and you add them up, you come to 666”.

Professor Haines-Eitzen also pointed out that other versions of the Book have 616 as the Number of the Beast worked out as another proof of her theory.

“You might think that this number destroys the possibility that it could be Nero. What is striking about this is that it may help to confirm the identity of Nero because this is the number you get if you spell Nero the Latin way – Nero Keiser”, she said demonstrating different fragments to Freeman.

One piece of evidence that strengthens Professor Haines-Eitzen’s theory can be found in Pergamon (Pergamum), an ancient city of Mysia situated about 100 km north of Izmir, Turkey.

In the Book of Revelation John sends a letter to the church of Pergamon. In his letter he warns that Satan lives among members of their congregation and that his throne is in their midst.

Pergamon was the capital of the Roman Province of Asia at the time. Scientists have tried to understand what John meant when he wrote about the 2throne” and they think he was either referring to an altar altar dedicated to Greek god Zeus, or to a temple dedicated to the Roman emperor Augustus.

Nero’s full name was Imperator Nero Cladius Divi Claudius filius Caesar Augustus Germanicus. Could Nero have been Anti-Christ? Perhaps he was, but there are also scholars who say some ancient stories about Roman Emperor Nero are wrong.