AncientPages.com - It’s certainly doesn’t happen every day that we come across, Viking artifacts, especially not swords.

But Saga Vanecek, an 8-year old girl in Sweden managed to do what most archaeologists dream of. She found a Viking sword in at the Vidöstern lake in Tånnö, Småland, Sweden.

"I was outside in the water, throwing sticks and stones and stuff to see how far they skip, and then I found some kind of stick," Saga told The Local.

"I picked it up and was going to drop it back in the water, but it had a handle, and I saw that it was a little bit pointy at the end and all rusty. I held it up in the air and I said 'Daddy, I found a sword!' When he saw that it bent and was rusty, he came running up and took it," she continued. 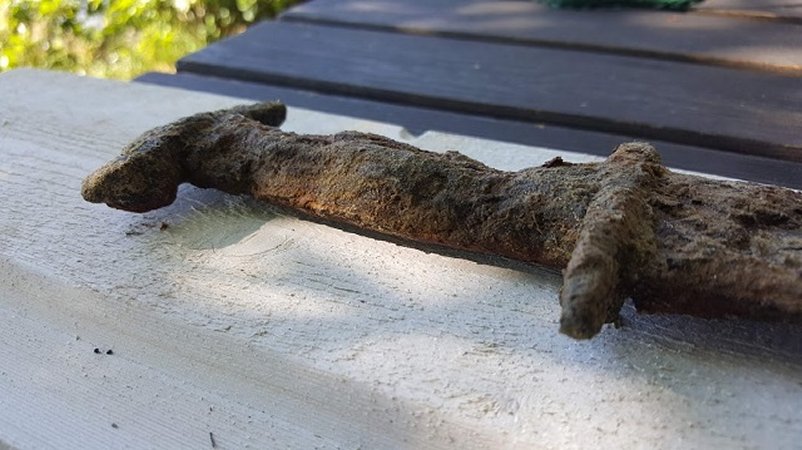 The water at the lake by the family's summer house was low this year due to drought, which may have been part of the reason Saga was able to reach the sword. Because of this, the family was putting a buoy out in the lake to warn other boats of an underwater slab of concrete which was dangerous in the low water levels.

"I asked Saga to bring the buoy, but she was taking her time like a kid does, playing in the water," her father, Andy Vanecek, recalled. "I was getting impatient because the World Cup game was about to start!"

At first he thought his daughter had found a stick or a branch, but realized from the way it bent that it could be a sword -- although even then, he thought it could be a modern toy. The family asked their neighbours and one of Vanecek's colleagues, who has an interest in history and archaeology, and they said the relic was likely authentic and should be reported to authorities, which the Vaneceks did.

Why Did Vikings Carry Decorative Swords That Were Useless In Combat?

It was initially reported that the sword was at least 1,000 years old, but the museum later contacted The Local to clarify that they believe it may be even older, estimated to date back to the 5th or 6th century AD, pre-Viking Age. The find has prompted huge interest from archaeologists and historians.

"It's about 85 centimentres long, and there is also preserved wood and metal around it," explained Mikael Nordström from the museum. "We are very keen to see the conservation staff do their work and see more of the details of the sword."

Anyone hoping to see the sword will have to wait at least a year, Nordström told The Local, explaining: "The conservation process takes quite a long time because it's a complicated environment with wood and leather, so they have several steps to make sure it's preserved for the future."

"Why it has come to be there, we don't know," he said. "When we searched a couple of weeks ago, we found another prehistoric object; a brooch from around the same period as the sword, so that means – we don't know yet – but perhaps it's a place of sacrifice. At first we thought it could be graves situated nearby the lake, but we don't think that any more."

The sword has prompted teams including museum staff to carry out further searches in the area, though none have resulted in such an important find. The first led to the discovery of the brooch but the oldest object found in the second search, on Wednesday, was a coin from the 18th century.

"We asked Saga [not to tell anyone about the sword] because we were afraid that if this find would go public too soon, there would be a lot of people there, perhaps destroying our possibility to find things later," he added.

Saga confirmed to The Local that the only person she told was her best friend, who she really trusts. Thursday was the first day she could reveal her story to her classmates, and her teacher threw a party to celebrate, handing out ice creams and showing Saga's TV and radio interviews to the class.

"They thought that it was very fun and interesting to know about my story," said Saga.