AncientPages.com - Two burials with rich grave goods were discovered in a pit of the Middle Minoan IA era (2100-2000 BC) in Siteia, NE Crete, during excavations of a palace-related cemetery, according to Tornos News.

The excavations took place at the cemetery of Petras in the area of Siteia, dated to 2800-1700 BC. 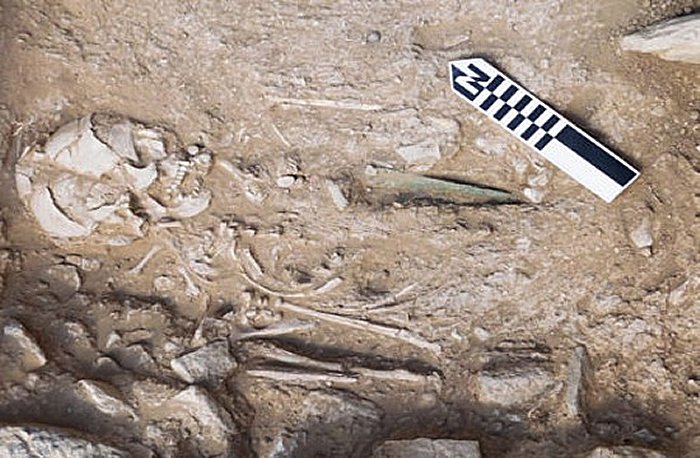 Mid-Minoan primary male burial in a pit with a copper handbook (under Grave Building 2) Photo Source: Department of Antiquities of Greece

In the first grave, archaeologists unearthed the remains of a man who was buried with a bronze short sword. Additional burial in the same grave contained the remains of a woman with a large number of gold beads of very fine workmanship" and beads of silver, crystal, carnelian and jasper.

The second burial was dated to the Proto-Minoan II period (2600-2300 BC) and included "dozens of gold beads with exquisite pressed decoration of spirals, as well as hundreds of other beads of gold or silver, with a diameter of 1mm, which appear to have been sewn onto a garment," archaeologist Metaxia Tsipopoulou of the Ministry of Culture, said.

A third burial, elsewhere, was unique to Petras and comprised of a tomb made of perpendicular schist slabs, forming a box-like structure. This contained two secondary burials of children under 10 years old and two gold bracelets from thin sheets of gold.

For now, archaeologists say that the ancient cemetery in Petras cemetery is the biggest on Crete. It belonged to elite family members related to the palace in the area.

Mid-Minoan IA beads of various types, made of ivory, carnelian and crystal ores. Image credit: Department of Antiquities of Greece

So far, 26 funerary buildings measuring from 45 to 150 square meters, have been excavated, along with five burial pits that include irregular stones or low walls.

According to Tsipopoulou, The cemetery contains at least four or five funereal buildings and features two extensive areas for rituals, dating to between 1900 and 1700 BC (Middle Minoan IB-IIB) and two periboloi, or low built enclosures, east and west. 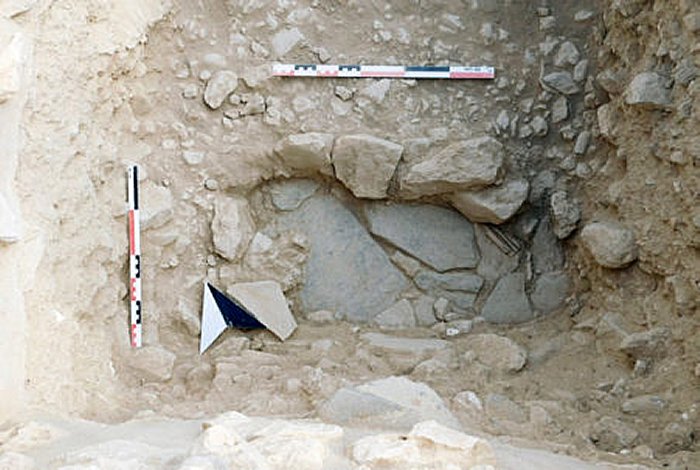 In antiquity, Petras had a large port and served as the entry gate to eastern Crete for the incoming trade of raw materials, objects as well as ideas from Syria and Egypt.

In the 14th century BC, after the destruction of its palace, the cemetery was related to honoring ancestors and this activity lasted to the 12th century BC.

An international team of 26 archaeologists  from Europe, the United States and Canada have participated in excavations and studies of the ancient site on Crete.

More on the excavation of the palace – here.