AncientPages.com - Four canopic jars dating to the 26th Dynasty have been unearthed in a tomb located in the South Asasif necropolis on Luxor’s west bank., reports Ahram Online.

Archaeologists in an Egyptian-American mission led by Elena Pischikova and Fathy Yassin say the jars are dated to 26th Dynasty and dedicated to “the lady of the house Amenirdis.” 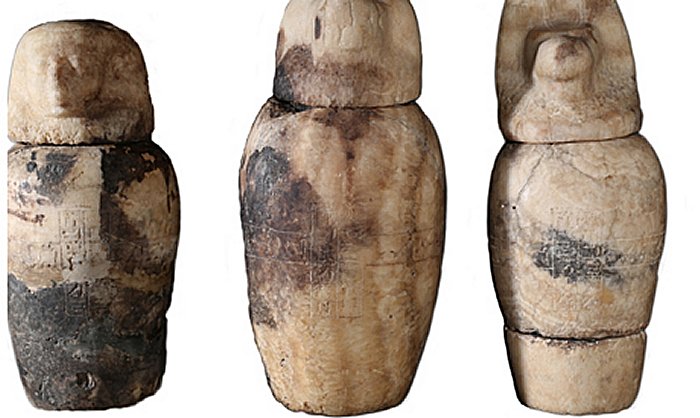 Four canopic jars from the 26th Dynasty, dedicated to “the lady of the house Amenirdis.” Image credit: Nevine El-Aref/Ahram Online

The sizes of the lidded jars vary from 35.5 to 39.4cm and each one bears inscriptions to “the lady of the house Amenirdis,” arranged in two vertical columns and one horizontal line. The formula is indicative of the 26th dynasty. The lids of the jars are in the shapes of a man, a baboon, a jackal and a falcon, and were skillfully carved by at least three different artists.

Mostafa Waziri, the secretary-general of the Supreme Council of Antiquities, told Ahram Online that the jars were found in a 50cm-deep space in the floor) of an intrusive burial compartment cut into the south wall of the pillared hall of the tomb (TT391).

“Although the contents of the jars were damaged by floodwater they still contain a large amount of resin,” said Pischikova adding the jars are hollow inside and probably held viscera. 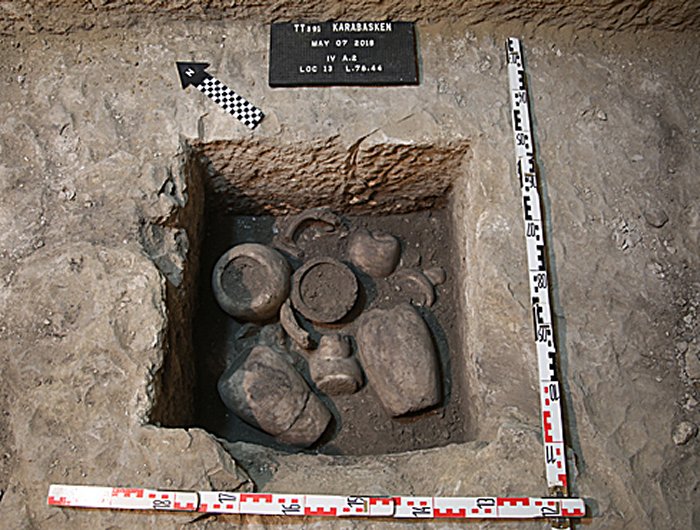 The sizes of the lidded jars vary from 35.5 to 39.4cm and each one bears inscriptions to “the lady of the house Amenirdis,” arranged in two vertical columns and one horizontal line. Image credit: Nevine El-Aref/Ahram Online

The project was founded in 2006 with the aim of restoring and reconstructing the damaged and partially collapsed Late Period tombs of the South Asasif necropolis, Karabasaken (TT 391), Karakhamun (TT 223) and Irtieru (TT 390).

During its 12 years of work the project has found thousands of fragments of tomb decoration and reconstructed the Second Pillared hall and part of the First Pillared hall in the tomb of Karakhamun.

"The restored tombs will feature sophisticated relief carving and painting of the 25th and 26th dynasties," Pischikova said.

Amenirdis was a Kushite princess, the daughter of Pharaoh Kashta and Queen Pebatjma. Amenirdis was a God's Wife of Amun during the 25th Dynasty of ancient Egypt and was later adopted by Shepenupet I. She went on to rule as high priestess, and has been shown in several artefacts from the period.