A. Sutherland - AncientPages.com - Ancient Egyptians deeply believed in the afterlife and a complex ritual set of burial customs was necessary in order to ensure an afterlife.

Mummification was an important part of this ritual but also all vital internal organs had to accompany the deceased on his (her) journey to the underworld in order to be reborn. However, the heart of the deceased was never among the organs chosen for preservation in canopic jars. This precious organ was the source of wisdom and the seat of memory and emotions of the human being, according to Egyptian beliefs. 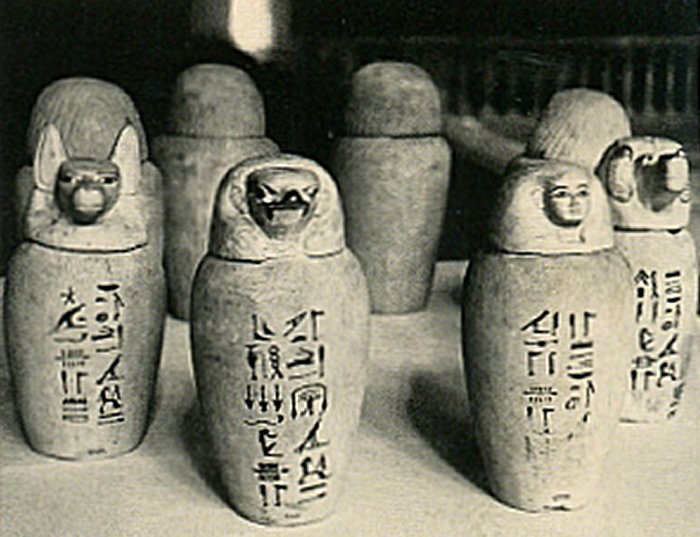 Therefore the heart was always left inside the mummified corpse for use in the afterlife.

Canopic jars were ritual vessels containing internal organs removed from the body of the deceased during the mummification process.

Their name “canopies” comes from Canopus, an ancient Egyptian city located in the Nile Delta, a place where they were first discovered. According to Strabo, Canopus was the pilot of a ship that belonged to King Menelaus of Sparta during the Trojan War.

Ancient legend says that Canopus received a fatal snake bite during his stay on the Egyptian coast. In the vicinity of this tragic place, king Menelaus had erected a temple dedicated to Canopus and also a city of Canopus developed around this place.

The canopies were usually made of calcite (alabaster), wood, limestone, and sometimes ceramic and earthenware. Four canopies were always placed in the burial chamber near the coffin.

Each canopy protected a different organ. 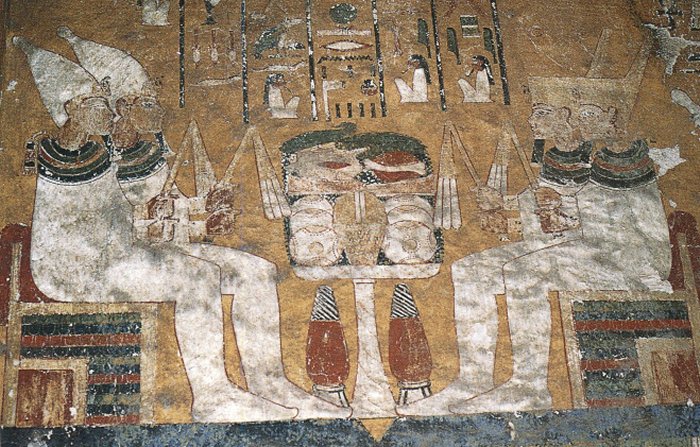 Depiction of four sons of Horus discovered in the tomb of Ay, western Valley of the Kings, Thebes. Seated mummiform figures wear the White Crown of Upper Egypt (left) and the Red Crown of Lower Egypt (right), the 18th dynasty

Clay canopies with flat covers and only sometimes covered with texts were already known during the Old Kingdom.

Later, in the Middle Kingdom, they were adorned with human heads and in the years 1320-1085 BC of the Ramesside Period and the reign of the 19th and 20th dynasty, the canopies were adorned with the heads of four Horus sons, who were the guardians of the intestines of the deceased. 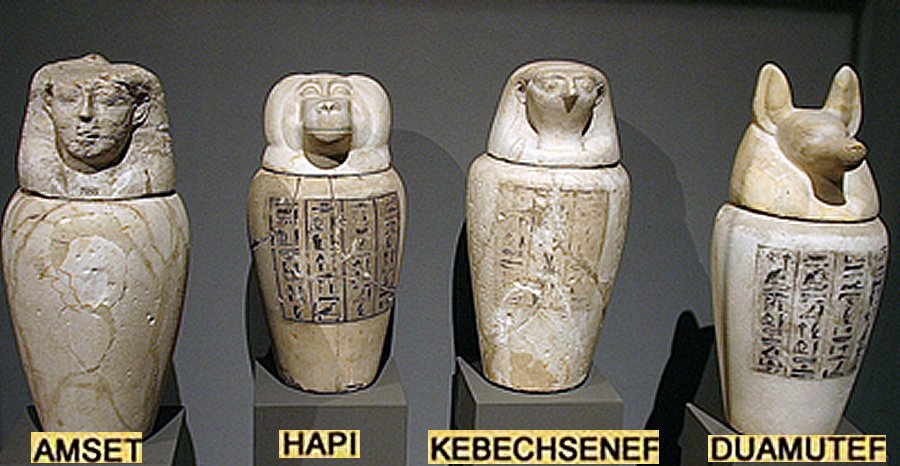 Internal organs of the owner, preserved in these jars were ready for the afterlife.

The earliest reference to these four gods can be found in the “Pyramid Texts”, where they are said to be the children and at the same time, the “souls” of Horus and the “friends of the king”. They function as assistance for the deceased monarch in his journey to the sky (“Pyramid Texts”).

According to Jean-François Champollion, a French scholar, philologist and orientalist, who decipherered

Egyptian hieroglyphs contributed much to our knowledge about ancient Egypt, and the jars, which were linked to the funerary cult of ancient Egypt.

Erman A. A Handbook of Egyptian Religion